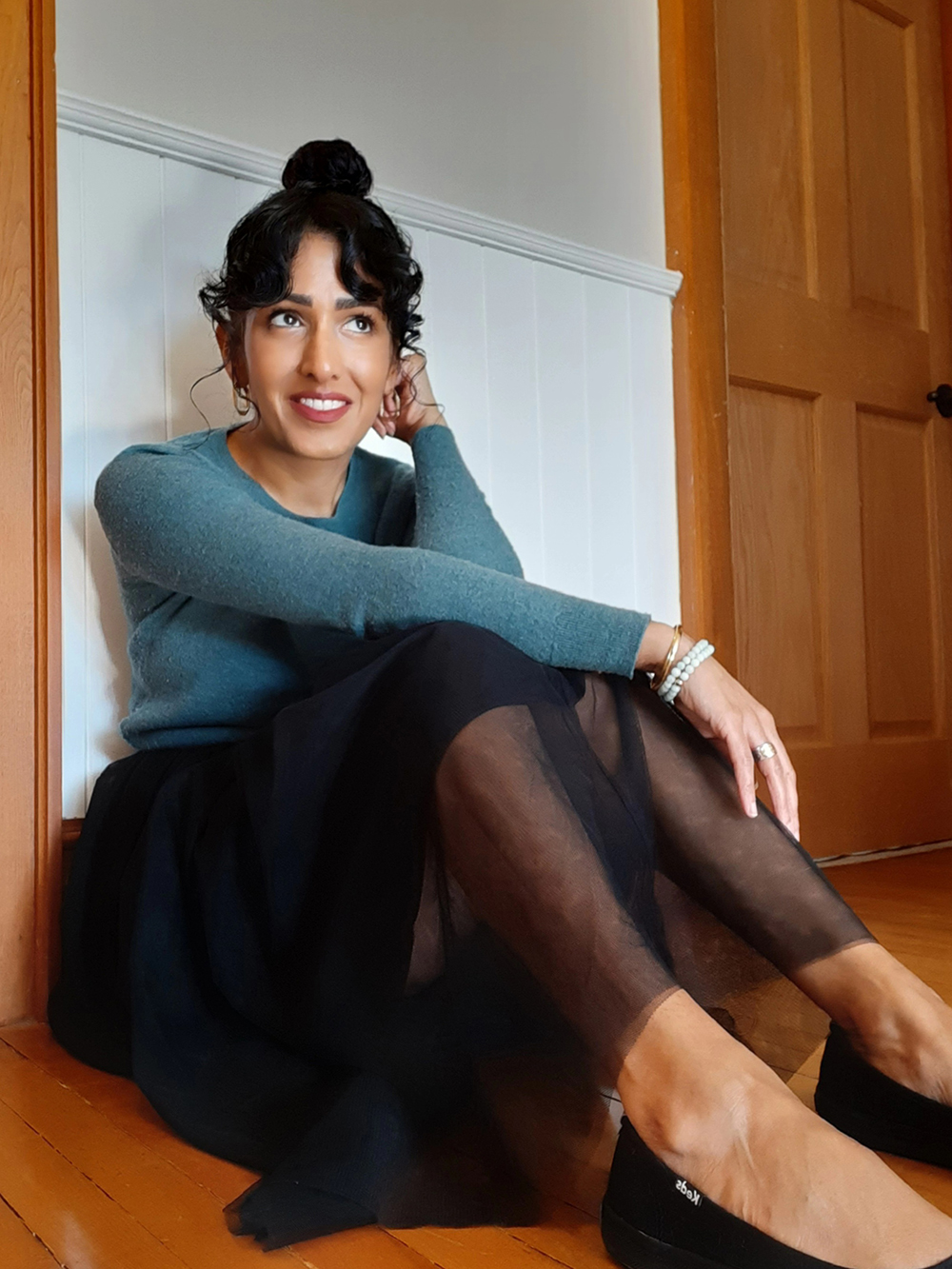 Happy #InternationalWomensDay! What better way to celebrate than by highlighting one of the inspiring and influential women in our community? We caught up with Innisfil artist and Sociology professor Angela Aujla to hear her thoughts on what intersectional feminism means today. Read the Q&A below!

Angela’s narrative artwork is informed by her academic practice in feminist postcolonial theory and explores the complexities of history, memory, culture, and identity. She seeks to reanimate subjects relegated to the margins of Eurocentric history, with a focus on diasporic South Asian stories. Her work is featured in Wintertide, on view from March 10 to 24.

Q. What does Women’s Day mean to you?

What I find affirming about IWD is to see women, girls and their allies internationally taking on such a breadth of feminist projects – in the arts, health care, education, politics, and more – to remake or dismantle the patriarchal and misogynist structures that are quite happy to keep them down.

Q. In addition to your artistic practice, you also teach gender studies. If you could tell your students one thing about contemporary, intersectional feminism, what would that be?

I would tell them that feminism isn’t – and shouldn’t be – a single issue movement. Gender justice is linked to other social justice and human rights issues such as racial justice, climate justice, justice for Indigenous people, and lgbtq2s rights. Writer Chimamanda Ngozi Adiche wisely warns of the danger of a single story – it’s only through a multiplicity of stories, lived experiences, and perspectives that we gain greater insight. 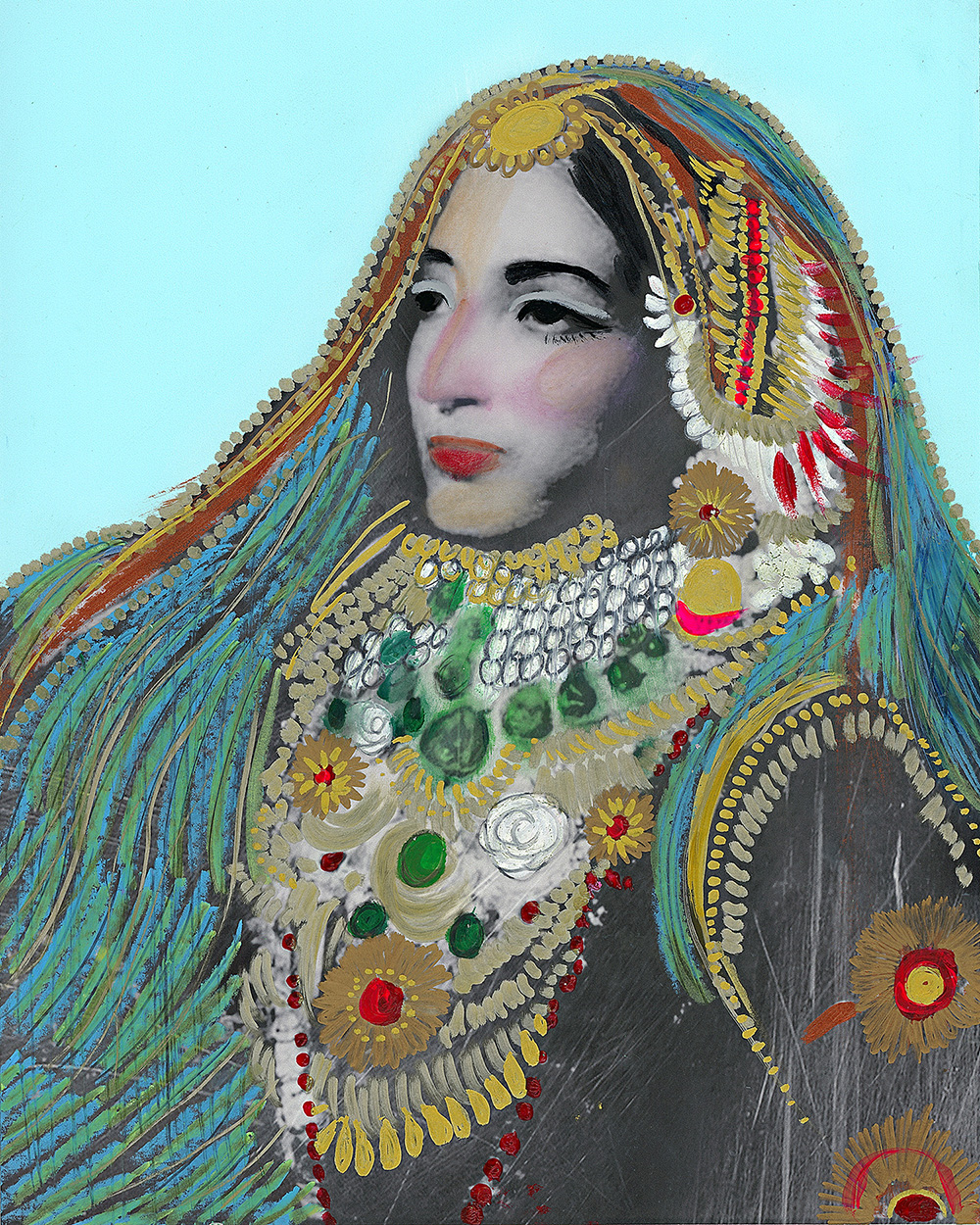 Q. You incorporate a lot of historical women in your art—Waheeda Rehman, Maharani Jind Kaur and Bibi Nanaki, as well as members of your own family. Can you tell us about one historical woman who we should learn more about?

A historical figure I find fascinating is Maharani Jind Kaur of the Sikh Empire (1817 – 1863). Also known as “The Rebel Queen”, Jind Kaur was disparaged by the British as “a thorn in the side of the British Empire”. During her brief rule as regent in her early 20s, she waged two spirited but failed wars that culminated in the annexation of the Punjab. British historian Peter Bance describes her as a “very gutsy woman” who “stood her ground against the British…she actively took charge of the Punjab.” Professor Nikky-Guninder Kaur Singh of Colby College, Maine describes the Maharani as “remarkable in how she discarded sati and purdah, dominant at the time, and led the courts, had meetings with chief ministers and the armies. All of them were taking her counsel.” After her impressive resistance against British rule in the Punjab, she was imprisoned, then exiled, as her beloved 9 year old son, Maharaja Dalip Singh, was vengefully stolen from her by the British crown. Despite her demands for the return of her only child, thirteen years passed before they were permitted reunite. She died at age 46 in London and despite Dalip’s pleas, the British government denied the cremation of her remains in the Sikh custom. It wasn’t until 1924 that her remains, as per her wishes, were taken to Lahore by her granddaughter Princess Bamba Sutherland.

My artwork of her commemorates her spirit of resistance to both colonialism and to patriarchal norms within her own culture, as well as the colonial violence she endured. I first digitally altered an iconic portrait of the Maharani that she sat for by British artist George Richmond, printed it, and embellished it with oil pastel, paint, and ink. The jewels pictured are particularly significant as they were taken from her by the British crown. Her son worked hard to negotiate the return of his mother’s jewels which were been kept in the treasury in Benares. They arrived just in time for his mother’s arrival in England and she was overjoyed. The necklace pictured here was eventually sold by auction on October 8, 2009 at Bonhams for £55,200.

Q. Let’s pretend that we’re putting your answers into a time capsule. What message about what’s happening today would you send to future generations?

I think I’d sum it up with the contemporary feminist phrase, “Nevertheless She Persisted”. It captures the resolve of the women who have had enough with the normalized misogyny that’s so tightly woven into the cultural fabric. I would want future generations to remember how remarkable it is that despite state violence, efforts to discredit them, and misogynist threats of sexual violence, that women all over the world refuse to be stopped in their pursuit for social justice. From Indigenous land defenders to the Black Lives Matter Movement to the Farm Bill protests in India women were and are fearlessly at the forefront, often at great personal cost.

A quote from writer Arundhati Roy comes to mind here, that despite the ugliness and violence women continue to face, that we can still endeavour to “…seek joy in the saddest places. To pursue beauty to its lair. To never simplify what is complicated or complicate what is simple. To respect strength, never power. Above all, to watch. To try and understand. To never look away. And never, never to forget.”

Q. Where can we find you online, and what future projects are you working on? (Instagram, facebook, etc.)

I am in the initial planning stages of a new series that explores the dynamics of early South Asian migration to Canada. For this series I’m going to move into some larger scale mixed media pieces which will incorporate archival imagery and visual storytelling. I am also excited to have two of my drawings featured an anthology of international South Asian diasporic and immigrant artists that will be coming out this spring.