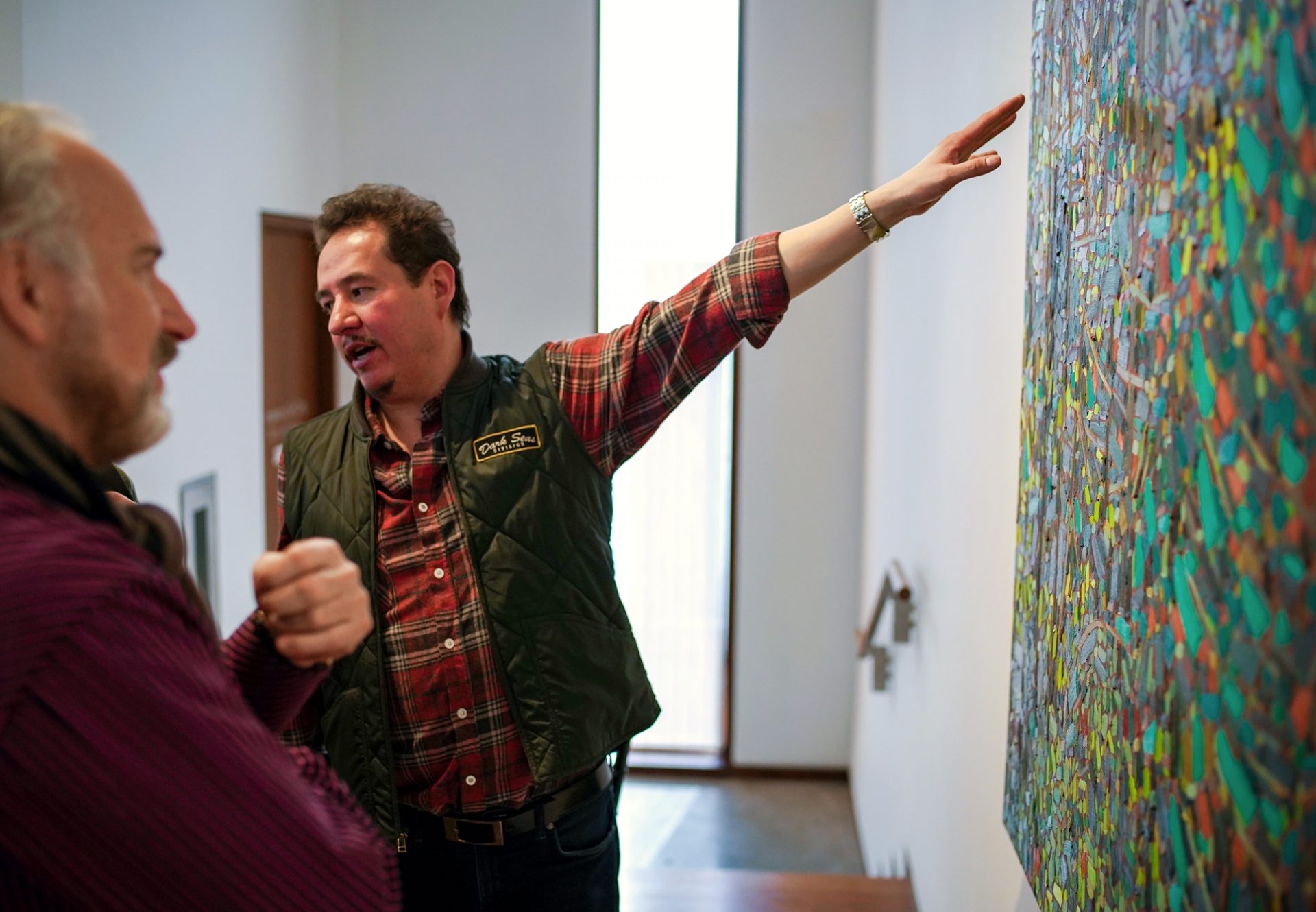 Artist talk by Bewabon Shilling at the MacLaren Art Centre, Barrie. Photo: Tyler Grace
In the quiet, grey light of the MacLaren Art Centre’s Janice Laking Gallery, an exhibition of paintings by Rama artist Bewabon Shilling suggests a landscape “wilder than our ability to comprehend it.” Depicting sweeping skies and vast uninterrupted forests, the nine works in Between the Forest and the Sky summon a profound and enduring sense of place for the artist who made them.

Working from the studio built by his late father at Rama Mnjikaning First Nation, Bewabon is engrossed by the ever-changing seasons and inspired by the people that come and go in his life. He often works in series, breaking down the landscape into its simplest form through a reduction of shapes and a bold colour palette.

The eldest son of the Ojibway artist Arthur Shilling (1941-1986), Bewabon carries with him a strong awareness of his family history and that of his people. Like his father, Bewabon feels a deep connection to his studio, where he finds his spirituality and identity by painting the land of his ancestors.

Between the Forest and the Sky, curated by MacLaren Associate Director/ Senior Curator Emily McKibbon, is a focused presentation of work made over the previous three years. Representing a shift in the artist’s practice away from intricate and abstracted paintings of fields and rivers uninterrupted by horizon lines, this new work features big and mercurial skies over the deciduous forests and mixedwood plains of his homelands. Though inspired by the palette of his father, these refracted landscapes contain a visual vocabulary that is entirely his own.

Bewabon studied at the Ontario College of Art and Design, through which he was accepted to take part in the Florence, Italy off-campus studies program. He graduated in 2001 and was awarded both the Norman Jewison Award and the Rose of Cedarvale Scholarship. Bewabon has had numerous solo exhibitions, showcasing his work throughout North America and Europe. Most recently, he completed a one-month Artist Residency in Sointula, BC, for which he received funding from the Canada Council for the Arts. He is represented by Roberts Gallery in Toronto, the Collectors Gallery in Calgary and the Darrell Bell Gallery in Saskatoon.

Between the Forest and the Sky will be on public view at the MacLaren Art Centre until March 2, 2020. Admission to the Gallery is a $5 suggested donation. For more information, visit www.maclarenart.com or phone 705-721-9696.

The MacLaren Art Centre’s winter season of exhibitions is made possible through the generous support of Barriston Law.