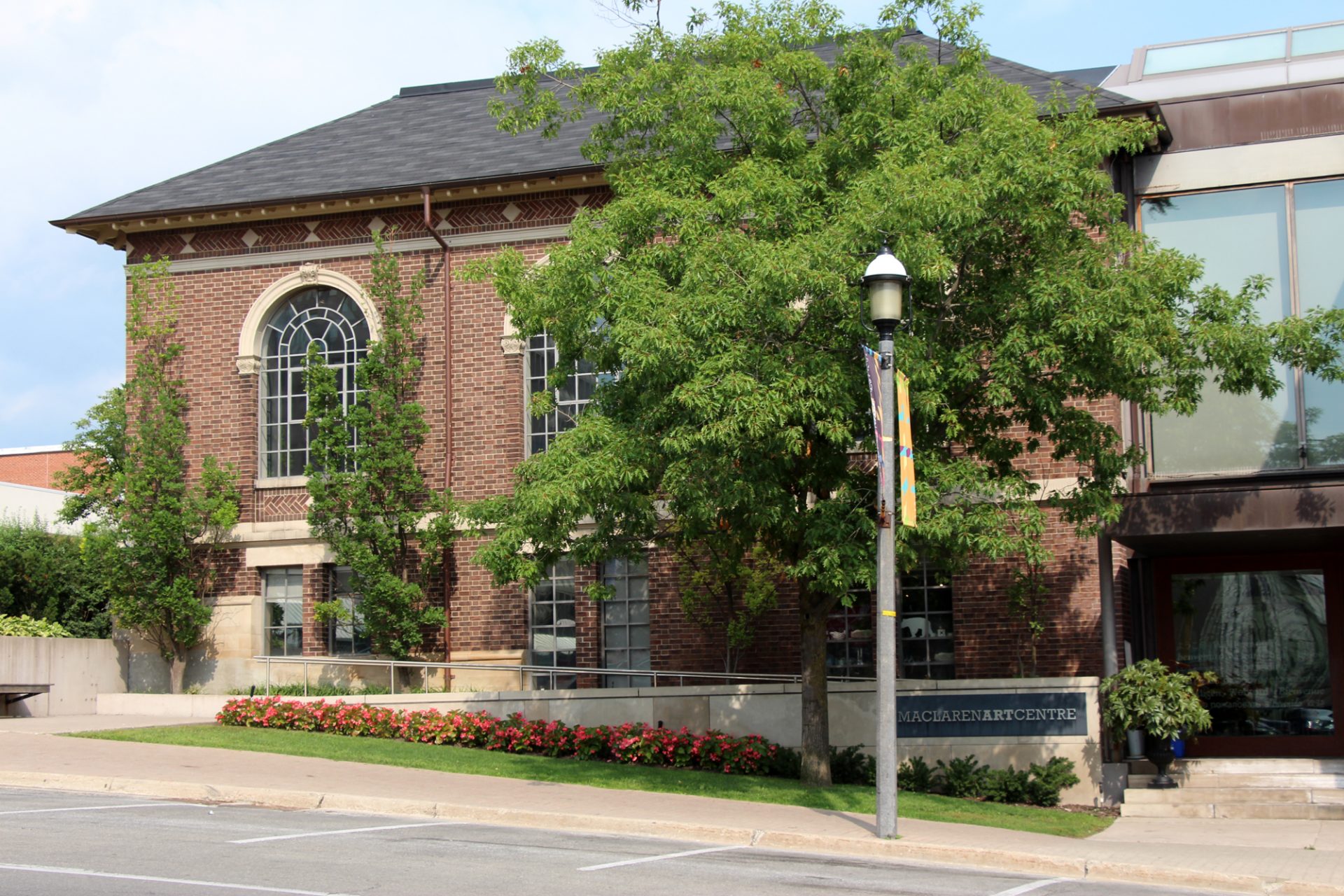 MacLaren Art Centre, 37 Mulcaster Street, Barrie. Photo: Christine Gillespie
This Saturday, September 21, the MacLaren Art Centre is offering the public a behind-the-scenes look at some of its key collections spaces for Doors Open Simcoe County. Free all-day tours from 10 am to 4 pm, including a special curator-led tour at 11 am, will illuminate the history and architecture of this treasured Barrie heritage site. While at the Gallery, enjoy coffee or lunch at the Café or out on the beautiful garden patio.

Each year, communities across Ontario, Canada and the world take part in the Doors Open programme by providing unique access to their most fascinating cultural sites. From historical houses to modern marvels of construction, Doors Open showcases the buildings, natural spaces, infrastructure and cultural landscapes that shape and define our communities.

Combining a renovated Carnegie library with a dynamic contemporary addition, the MacLaren Art Centre complex includes multiple galleries, an education centre, a garden patio, café, gift shop and framing department. The building is designated under the Ontario Heritage Act as a space of architectural and historical significance to the city of Barrie. Openness, accessibility and transparency are key features of the award-winning design.

Before becoming an art gallery, the building was home to the Barrie Public Library. In need of a larger facility, the Library Board applied for a $15,000 grant from the Carnegie Corporation of New York. The grant was approved and construction of the building concluded in 1917.

The Carnegie Library was designed by A.H. Chapman of Chapman and McGriffin of Toronto and constructed by Ball Planing Mill of Barrie. Chapman used the classical revival style of other Carnegie libraries in Ontario. Palladian style doors and windows, acanthus leaf bracketed keystones, dark red bricks laid in light gray mortar, and embellishments of terra-cotta and Indiana limestone are typical features of these buildings.

The building continued as the Barrie Public Library until the late 1990s, when the library moved into a new, much larger purpose-built facility. The MacLaren Art Centre was approached by members of City Council to consider moving to the Carnegie building. At the time, the MacLaren was housed in Maple Hill, a century home on Toronto Street built in 1868. The house was bequeathed to the Barrie Gallery Project by Maurice MacLaren in 1989 and was the Gallery’s home from 1992.

The MacLaren received City approval for the move to the Carnegie building in 1996. Planning began with the undertaking of numerous focus groups with the residents of Barrie and discussion about what people wanted to see in their new art centre. The overwhelming response was a desire for an intimate, welcoming space. The architecture firm of Hariri Pontarini was engaged to design the renovations and the new facility opened to the public in 2001.

The MacLaren Art Centre has won much critical acclaim and several architectural awards including the 2003 Ontario Association of Architects Award for the Best Building under $10 million.

The Carnegie Corporation of New York was established by Scottish-born American philanthropist Andrew Carnegie in 1911 “to promote the advancement and diffusion of knowledge and understanding.” Through a personal donation of $56 million, Carnegie was responsible for building over 2,500 public libraries in the English speaking world. One of Carnegie’s lifelong interests was the establishment of free public libraries to offer everyone a means of self-education. During his lifetime, he gave away over $350 million.

For more information about the MacLaren Art Centre, visit www.maclarenart.com or call 705-721-9696.