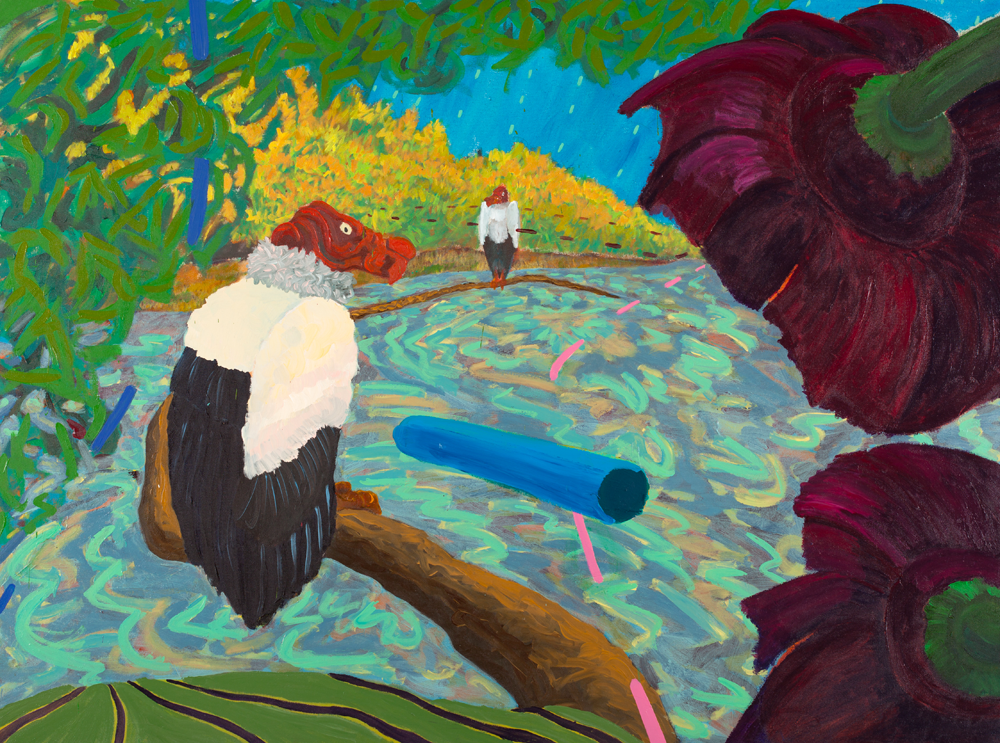 Brian Burnett is a regional senior artist and educator. Rendered in a buttery application of paint and vibrant colours, Conscious Traveller depicts a lush tropical coastal shore with two Andean condors perched on opposing ends of a branch as a cylindrical structure is swept by animated currents of water. Dashes of lines interrupt the picture plane, insinuating the continuation of space beyond our sight. Conscious Traveller shows hints of an environmental consciousness. The Andean condor is known for its critical ecological role as a scavenger, performing the duty of cleaning its natural surroundings of decomposing flesh. Burnett’s title is a nod to the migratory nature of condors that voyage from mountainous to coastal regions, purifying both land and water.

Made by a leading figurative painter, this painting is a bold, expressionistic and colorful work that is an exceptional example of Burnett’s early critical endeavours. Burnett received his education at the New School of Art, Toronto under the tutelage of leading painters of the 1970s, among them Graham Coughtry, Gordon Rayner and Robert Markle. In the 1980s, artists in Toronto began to shift from abstraction to figurative modes of representation. Burnett was a part of this resurgence and is associated with the founding of ChromaZone, an artist collective that spearheaded Toronto’s figurative painting movement.

Brian Burnett has shown his work at the Museum of Contemporary Art-Toronto; the McMichael Canadian Collection, Kleinburg; and the Art Gallery of Hamilton. His work is represented in the collections of the Art Gallery of Ontario, Toronto; the Agnes Etherington Centre, Kingston; and the Glenbow Museum, Calgary. The artist was born in 1952 in South Porcupine, Ontario and resides between Toronto and Tiny, Ontario.