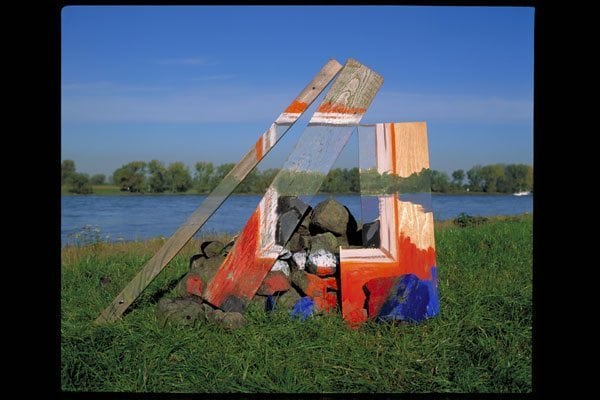 seeing by Akira Komoto presents a series of interventions into the landscape, featuring hand-painted rustic constructions that simultaneously obscure and reveal the horizon. As earthworks as photographs, Komoto’s project condenses and collapses spectral ranges and perspectives to create a hallucinatory world where twigs (seeing 80-1), shovels (seeing 85-25) and canvasses (seeing 88-12) bleed into the skies they rest against. This series reflects the traditional Japanese custom of ukiyo-e, woodblock prints paintings that are often described as “pictures of the floating world.” However, in his use of everyday materials, deliberately banal, chronological titles, and in his resolute anti-naturalism, Komoto’s photographs are better understood within the context of Japanese avant-garde art practices that emerged out of World War II.

Born in 1935, Komoto survived the devastation of World War II and came of age during the Allied Occupation of Japan and the democratization and demilitarization that followed. A painful process that resulted in a significant re-evaluation of much of Japanese traditional practices, artists responded to this crisis by embracing non-art or anti-art, art that rejected the preciousness of previous works. The Gutai group was the first collective to practice radical, avant-garde art in the post-war period and they set the tone for much of what followed. Formed by Yoshihara Jirō in 1954, by 1955 the group comprised twenty artists who gathered together for a open-air exhibition in a forest in Osaka. The Experimental Outdoor Exhibition of Modern Art to Challenge the Mid-Summer Sun introduced time-based aspects of deterioration and decay to traditionally static paintings and sculpture. Inspired by the active art-making processes of Abstract Expressionists like Jackson Pollock rather than the formalist tendencies of that movement, much of Gutai’s work presaged later conceptual art movements, including happenings, performance installation art. Within a rapidly internationalizing Japan marked by extreme privation, the Gutai group resonated with a struggling, post-war generation.

Komoto studied art within this radicalized milieu, and he attended university at Gifu, the site of the experimental Gifu Independent Art Festival. first significant works were titled The Correspondence of a Geographical Point and an Arbitrary Position Equal to 1/3000 of a Map of Tokyo, performed in 1971 at the Yoyogi Park ‘Man and Earth Festival’ (1971) and The Correspondence of White Smoke from a Cessna Plan 1,000 Meters above the Ground with a 340m x 10cm Piece of Fabric Tape on the Ground (1972). Both were public performances, linking to small but meaningful interventions. Trained as a painter and working as a performance artist, these fleeting acts are evidenced only by photographed process documentation.

first foray into photography as an autonomous art form was in 1974, with the first of his series, seeing 74-1. Interested in the ways in which photography elided parts of the scale, Komoto placed a red, ripe and green, unripe tomato at opposite ends of a rectangular piece of paper and painted out the chromatic differences between the two, moving from red to yellow, and from yellow to green. Unlike the process documentation of Komoto’s Correspondences, photography was an integral element of his ephemeral earthworks: it was ultimately the camera that condensed perspective and the film’s limited spectral sensitivity that blended artificial and natural .

The seeing series ultimately proved to be a life’s work, and Akira Komoto continues to construct and photograph these images. work has been shown in numerous venues in Japan and internationally, including the National Museum of Modern Art (Tokyo), the Museum Kunstpalast (Germany), the Victoria and Albert Museum (London) and was the subject of a major touring show organized by the MacLaren Art Centre in 1994. Komoto currently teaches at the Joshibi University of Art and Design in Tokyo and lives in Kyoto, Japan. 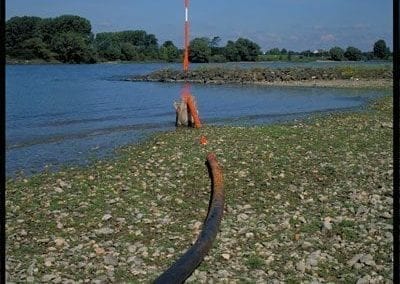 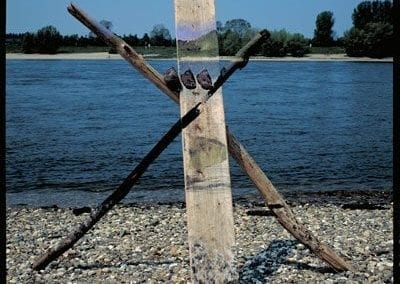 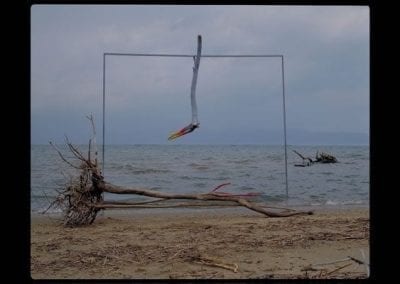 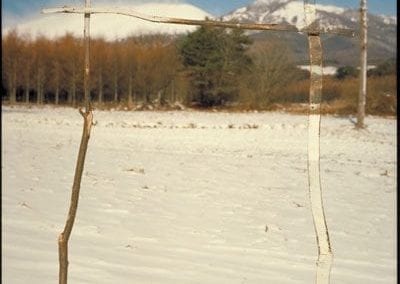 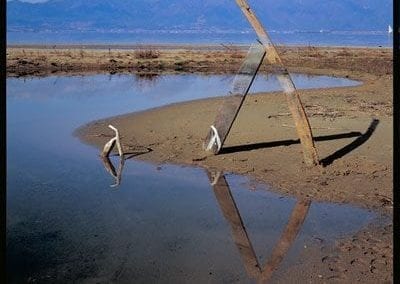 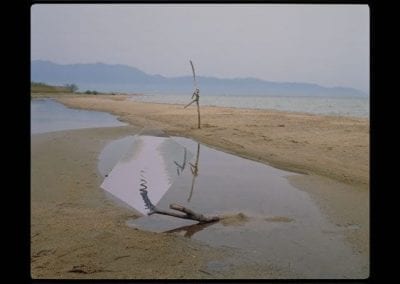 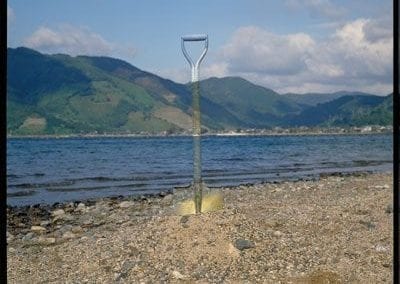 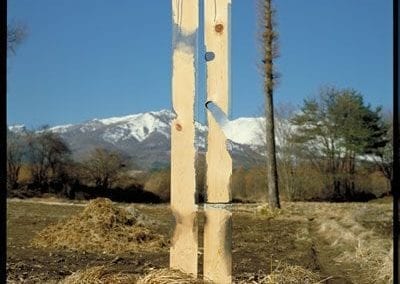 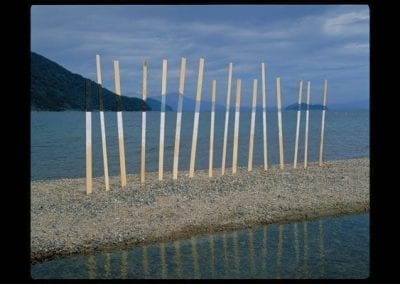