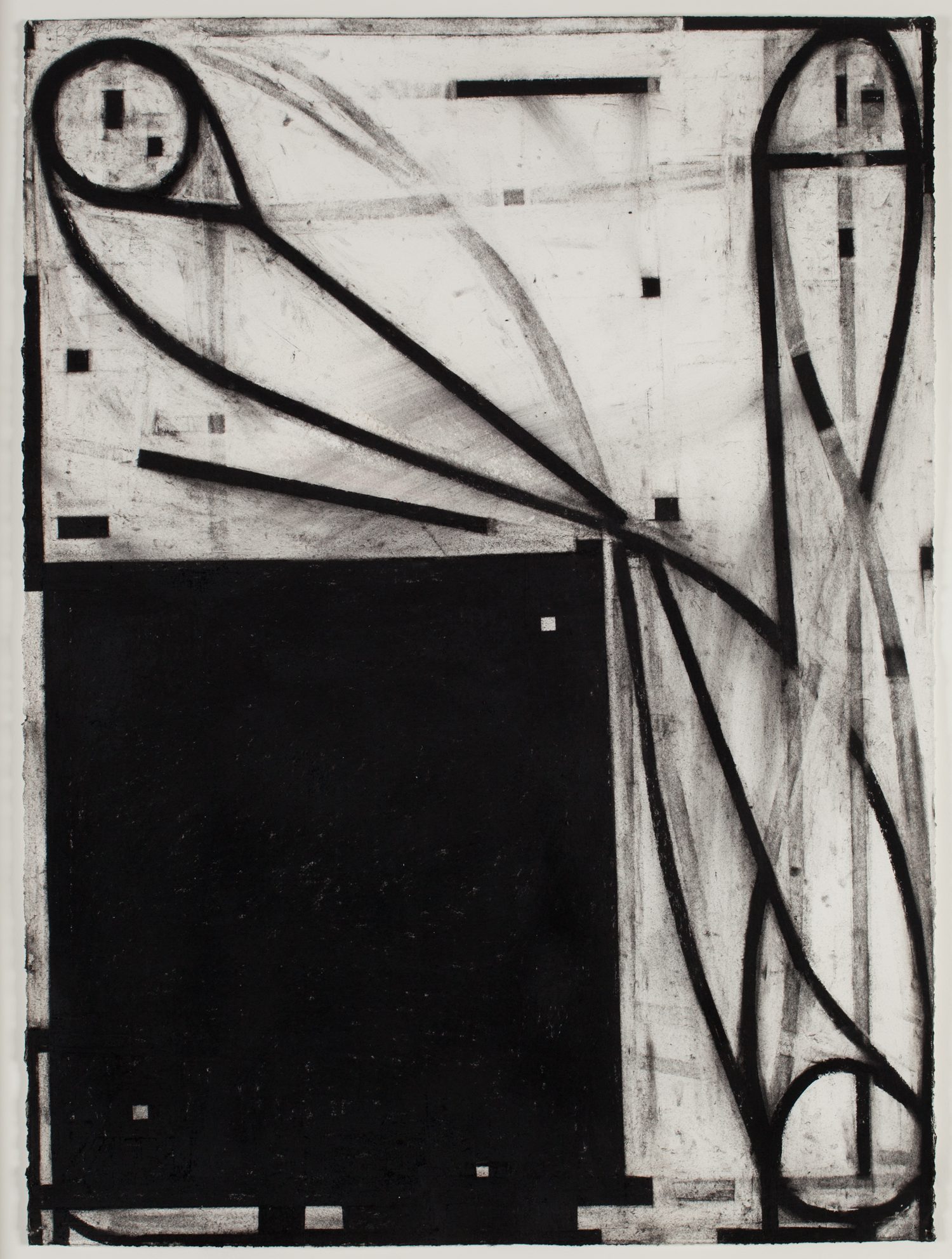 In The Thinking Eye, Paul Klee alleged that “the most highly charged line is the most authentic line because it is the most active.” For Klee, a line was imbued with narrative potential, and a strong line could be “a guiding thread, even in the thick of twilight.” The works in Critical Paths, here in the Joan Lehman Gallery and online, are drawn from the MacLaren’s Permanent Collection and contain prominent linear elements suggestive of race tracks, dead ends, feedback loops and ragged waves. The lines infuse motion into still images while directing the movement of our eyes across the works.

Ron Shuebrook’s untitled drawing (2000) is strongly graphic, inflected with a modernist concern for space and an intuitive sense of line. The work implies a satellite view of a wintry landscape, a series of paths cut into and erased from the scene. David Urban’s Under the Piano (1996) is rich with linear imagery and, while it too insinuates a topographical view, recalls the busy highway systems that circle and enclose major urban areas.

Ron Shuebrook was born in Virginia in 1943 and began his artistic career in the early 1970s. Shuebrook was employed as an educator and administrator at numerous institutions across the United States and Canada including Kent State University, Nova Scotia College of Art and Design and the University of Guelph. His work has been acquired by more than fifty public galleries, museums and corporations including the National Gallery of Canada, the Art Gallery of Ontario and the MacLaren Art Centre. Shuebrook is represented by Olga Korper Gallery in Toronto and lives in Guelph, Ontario and Blandford, Nova Scotia.

David Urban is a painter based in Toronto, Ontario. He studied English Literature and Visual Art, and received his MFA from the University of Guelph in 1994. Urban’s work has been featured in numerous solo and group exhibitions at the Art Gallery of Ontario; the Museum of Contemporary Canadian Art, Toronto; Musée d’art contemporain de Montréal; and others. His work is in the Permanent Collections of the Art Gallery of Nova Scotia, the Vancouver Art Gallery, the National Gallery of Canada and the MacLaren Art Centre. Urban is represented by the Corkin Gallery in Toronto.