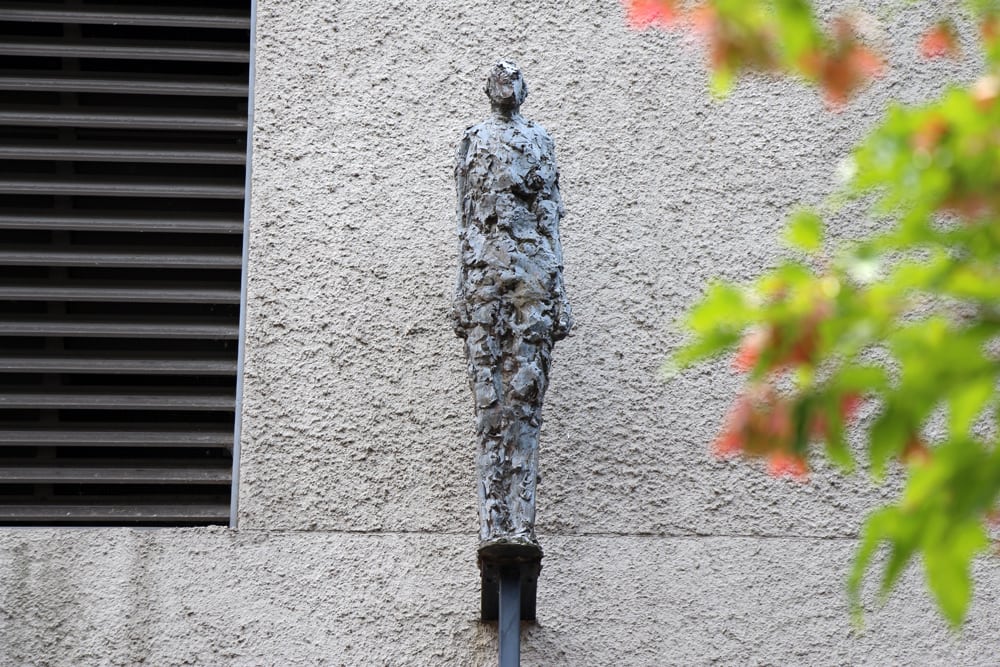 Ted Fullerton, Ascension, 1997, steel and cast resin, 975.4 x 91.44 x 70 cm. Gift of the artist, 2000. Collection of the MacLaren Art Centre. Photo: Christine Gillespie
Artist Ted Fullerton’s work explores issues of the human condition through the use of mythological symbols and figures. For Fullerton, these mythic symbols are entry points to the unconscious. He uses this symbolic language to investigate the dualities of human nature: the tension between the rational and the emotional, the physical and the spiritual, the intellectual and the intuitive.

The concept for Ascension is based on the Judeo-Christian story of Job. Pious father Job is caught in a wager between God and the Devil as they test his faith in God by removing all the protections he enjoys as a follower of God. Despite the theft and destruction of all his possessions, the death of his children and the loss of his health, Job’s faith in God persists. This work sees Job’s story as a metaphor for the indestructability of nature, which endures and regenerates despite abuse at the hands of humans. The figure of Job in this cast resin sculpture was first modeled from clay and fallen tree branches. The three steel sections that make up the vertical beam refer to the three trials that confronted Job.

Ted Fullerton (born 1953) graduated from the Ontario College of Art in Toronto in 1976. He has exhibited across Canada and worldwide, with works in private, corporate and public collections across North America. Fullerton was a professor and the head of Georgian College’s School of Design and Visual Art from 1978 to 2013. He lives and works in Tottenham.