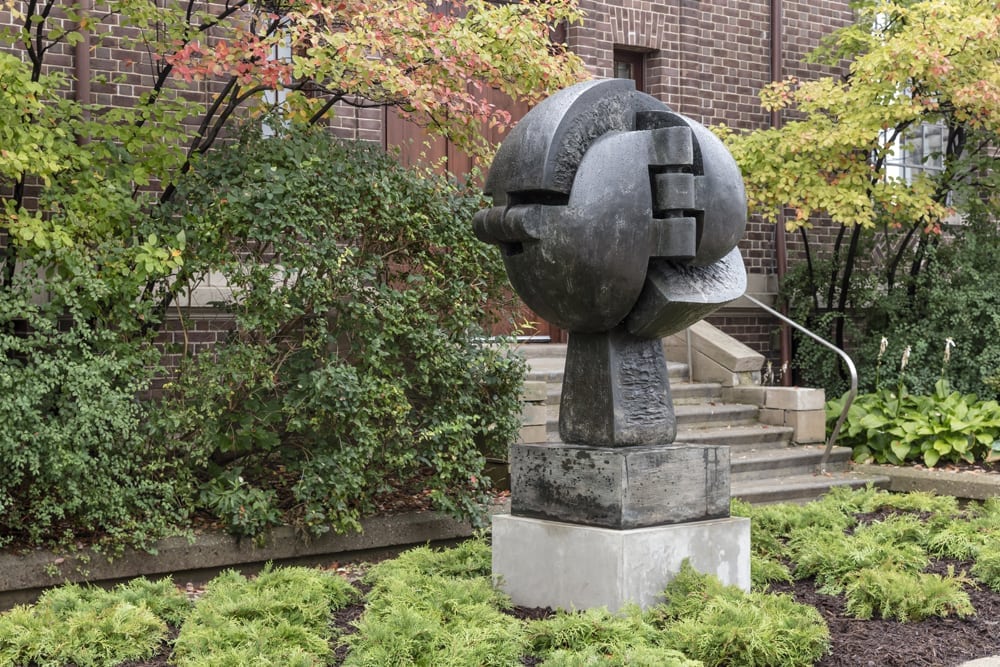 Sorel Etrog, Dream Chamber, 1976, ed. 1/5, bronze casting, 150 x 60 x 60 cm. Collection of the MacLaren Art Centre. Gift of the Artist, 1999. Photo: Toni Hafkenscheid
Sorel Etrog (1933-2014) is one of Canada’s pre-eminent artists, a sculptor with an international reputation, renowned for his use of hinge iconography. Dream Chamber is one of the most significant pieces of this kind in his oeuvre. Distinctly figurative, this work is evocative an interlocked skull. It speaks to the transformative power of imagination and a belief in human potential.

Born in Romania, Etrog survived World War II and later immigrated with his family to Israel in 1950 where he continued his studies in art. In 1958, Etrog attained a scholarship from the Brooklyn Museum and relocated to New York City. After a successful show at Toronto’s Gallery Moos, Etrog moved to Toronto in 1963. Etrog was appointed to the Order of Canada in 1994, and in 1996 was made a Chevalier of Arts and Letters by the Government of France. His work is represented in many significant public collections, including the Art Gallery of Ontario, Toronto; the National Gallery of Canada, Ottawa; the Guggenheim, New York City; the Museum of Modern Art, New York City; the Tate Museum, London; the Musée National d’Art Modern, Paris; and the Tel Aviv Museum, Tel Aviv.