With this exhibition, Barrie-based artist Sean George reconsiders what a monument might be at a moment when the idea of the monument itself is in question.

With this exhibition, Barrie-based artist Sean George reconsiders what a monument might be at a moment when the idea of the monument itself is in question. Click on each of the pins in this interactive image map to explore works presented in Monuments, Memories and Missing Passages in greater detail. Sean George shares his thoughts and sources of inspiration for several components of the installation. 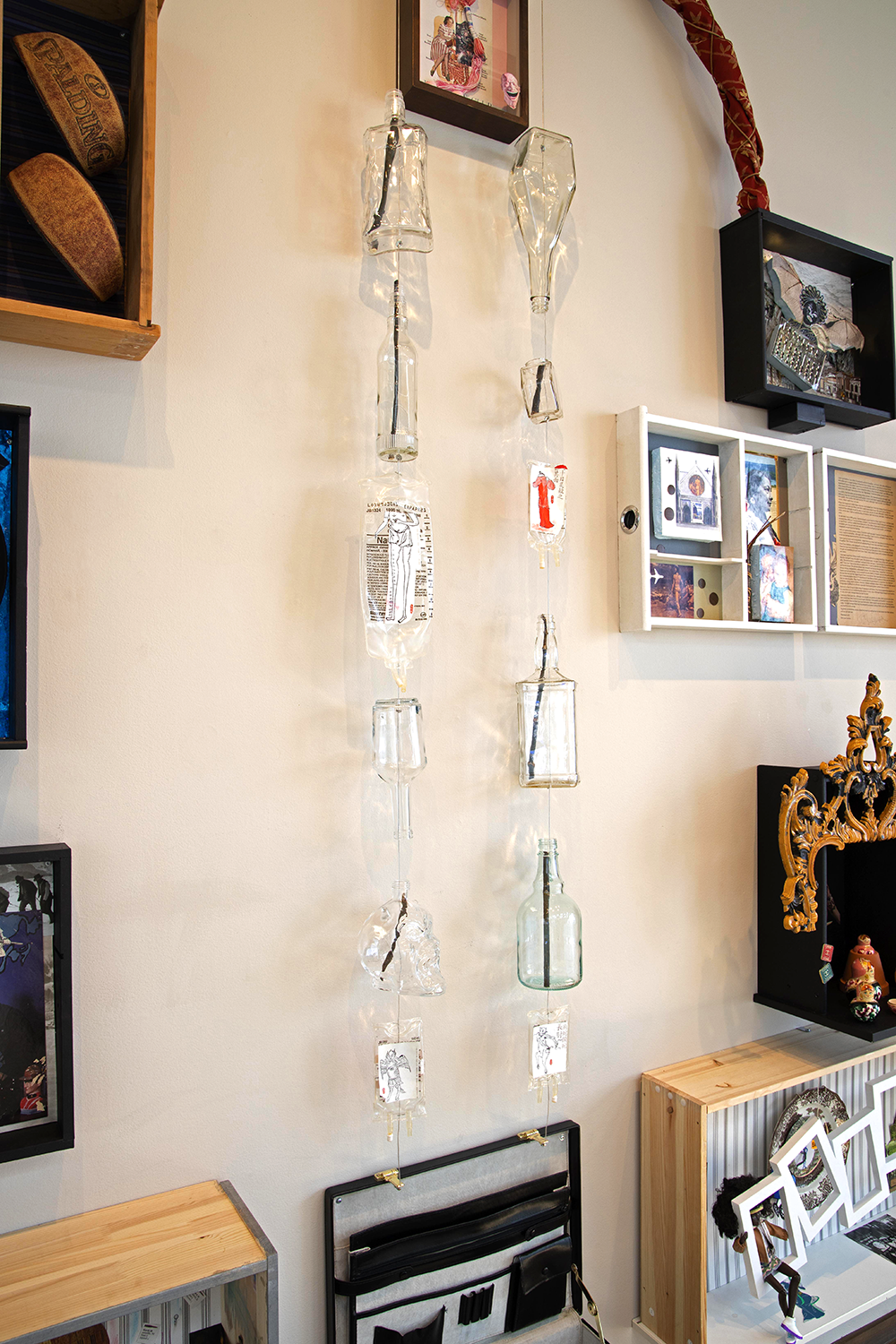 This central part of the sculpture showcases my fascination with ideas of transformation and life. Glass bottles and IV bags are strung up to form two columns. Some of these contain drawings on paper and even small twigs. The glass bottles are used to reference transformation because of the incredible change that sand undergoes to make glass. The IV bags presented here are highly personal—they were used when I was hospitalized in the early part of 2020. These bags, along with the twigs, introduce the idea of life to the installation, especially ways of maintaining life.

The small twigs act much like the tree in Albrecht Dürer’s engraving Adam and Eve (1504), dividing the installation in two. The bottles that house them symbolize how we come to know the world—first in small, compartmentalized sections before understanding how things are linked together. They also serve as a reminder that we view the world in small compartments.

In destroying statues and monuments, we often destroy the roots of a larger discussion, as if to silence it. Trees are quintessential social sculptures and monuments, and while most of us could never have a tree in our house, we use paper and wood harvested from trees to tell stories and build up our lives. In this way, a tree is both a point of beginning and a point of departure. Traditional monuments can be as well. We must assess, discuss, research and question history, not seek to destroy it. The statue or monument that some may find difficult to bear, typically focuses on only one part of the discussion. 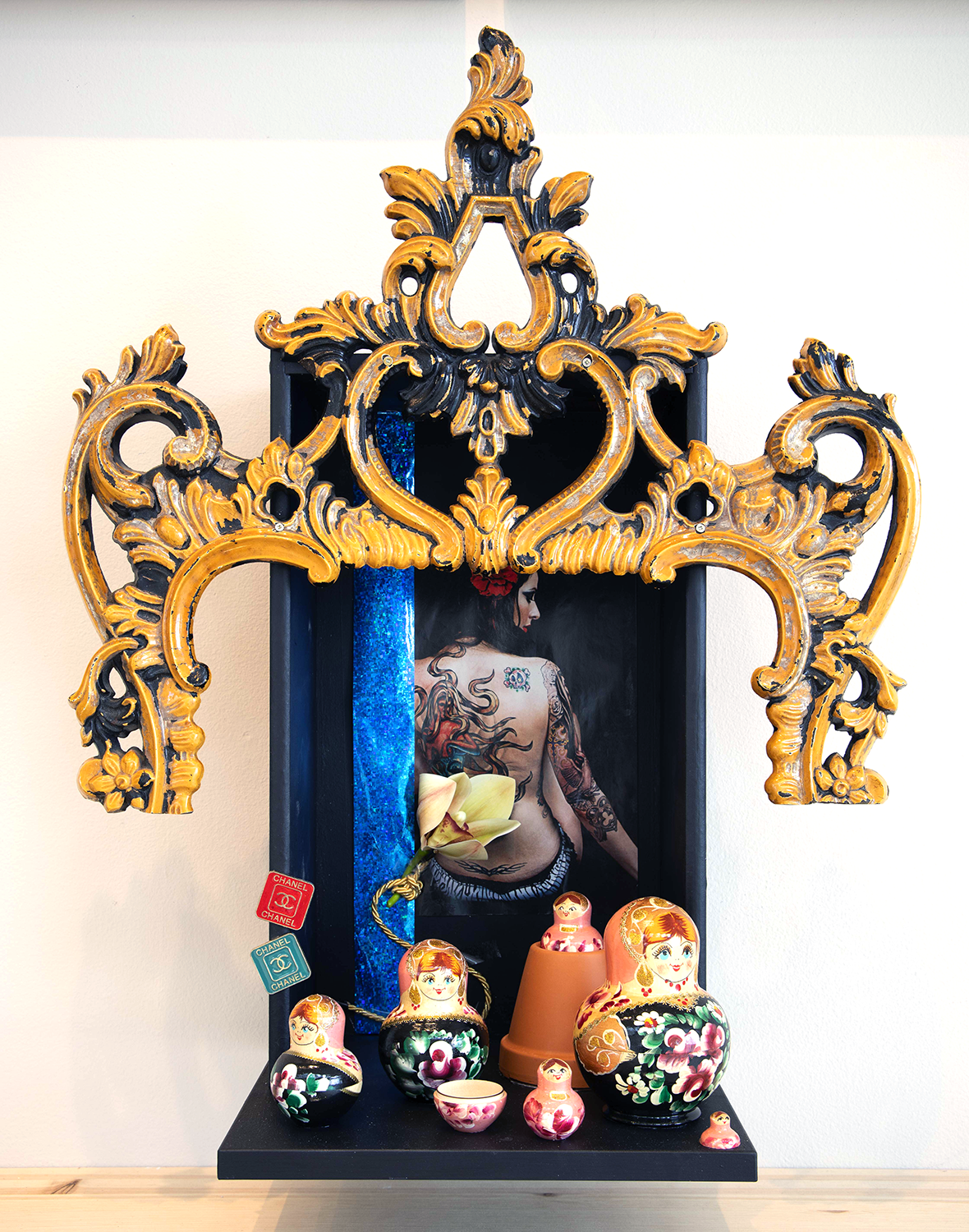 The shadowbox for Untitled (Craft is Art) holds symbols that reference “high” and “low” art. Matryoshka dolls (Russian nesting or stacking dolls) sit in the foreground and a broken segment of a faux Baroque frame is presented as a proscenium—an architectural detail of a theatre stage in front of the curtain. In the background, an image of a woman’s tattooed back spies on the tiny, precisely shaped Matyroshka dolls; the bold colours of her tattoo echo the vibrant images painted on the dolls.

During the Renaissance, painting was considered to be high art because of the techniques that painters used to create seemingly three-dimensional images on two-dimensional surfaces.

Painting was able to represent reality in a highly photographic way long before cameras were invented. This new skill saw all other visual artforms, such as textile, wood or glass art, to be considered lower forms of art. In short, things we now consider to be craft were seen as lower forms of art, lacking deep narrative content

In the modern sense, art is subjective whether it’s stained glass, quilting or metalwork. The media used should have no bearing on the reception of any artwork. 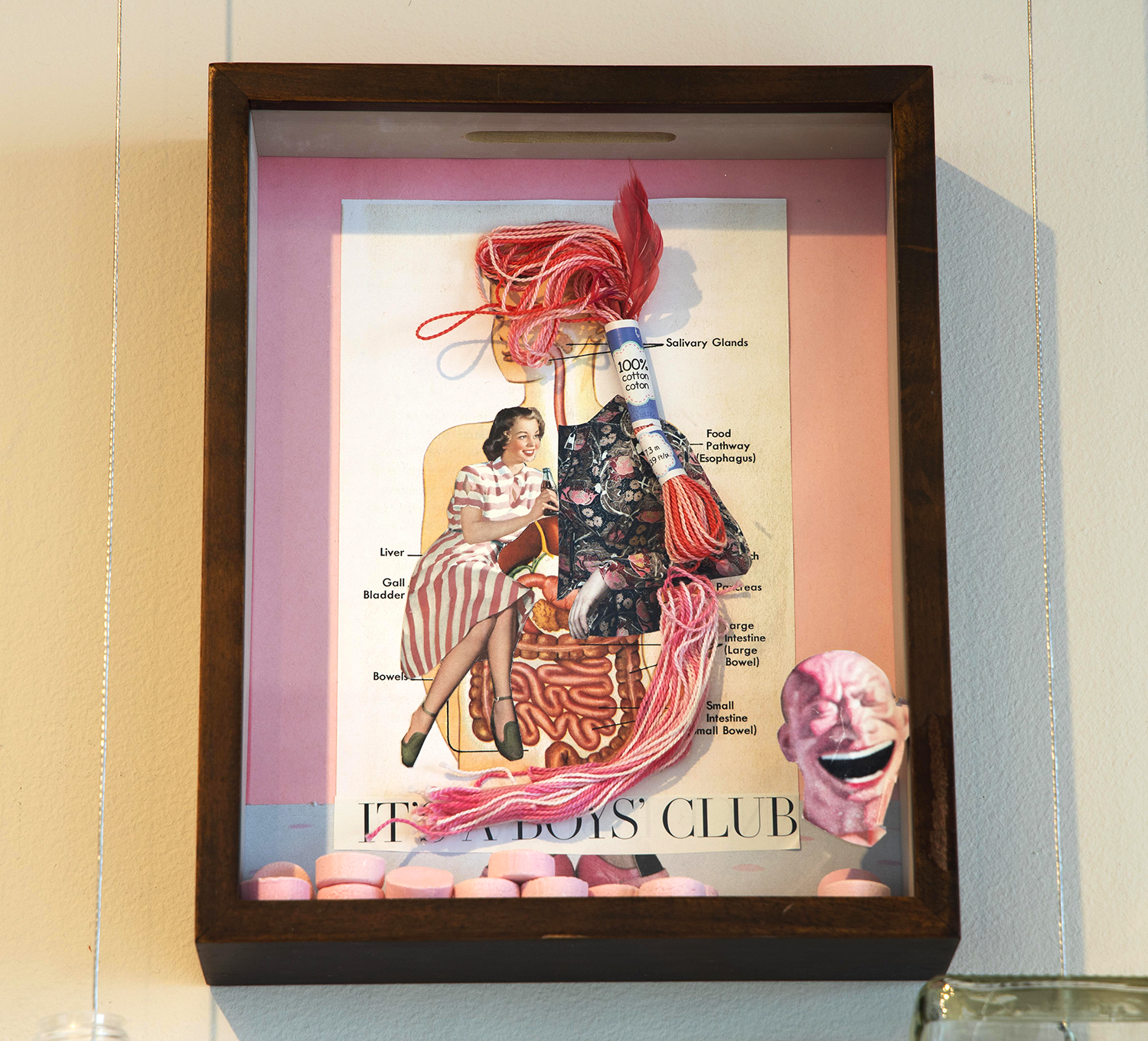 Creating Social Sculpture is one of the most difficult works I have made. Over the course of two years, I collected readymade materials to collage together, selected personal photographs to produce photo-montages, and arranged these component parts together in shadow boxes made from dresser drawers, wooden boxes, and a single black briefcase. I think of this sculpture as a set of physically tangible ideas that adds to a conversation about public statuary.

It’s A Boys Club is a pivotal piece in the larger sculpture. It can be found at the top of the installation, underneath a fabric arch, which divides the installation into male and female sides.

In an abstract sense the entire work mimics the famous engraving Adam and Eve (1504) by Albrecht Dürer. In this work, Adam and Eve are depicted in the Garden of Eden precisely after the moment they have sinned. They stand on either side of the Tree of Knowledge, which acts as a divider of the image while also helping to set the scene of the biblical tale.

The small box that frames It’s a Boys Club was a pre-existing piece that I created in 2018 as the example artwork for a W-Edge youth art program at the MacLaren Art Centre. It focuses on masculine and feminine attributes that sometimes help to shape who we are, specifically how society assigns these attributes to people labeling them as boys and girls. This labeling can be damaging. My hope with this work is to blur the notions of identity. 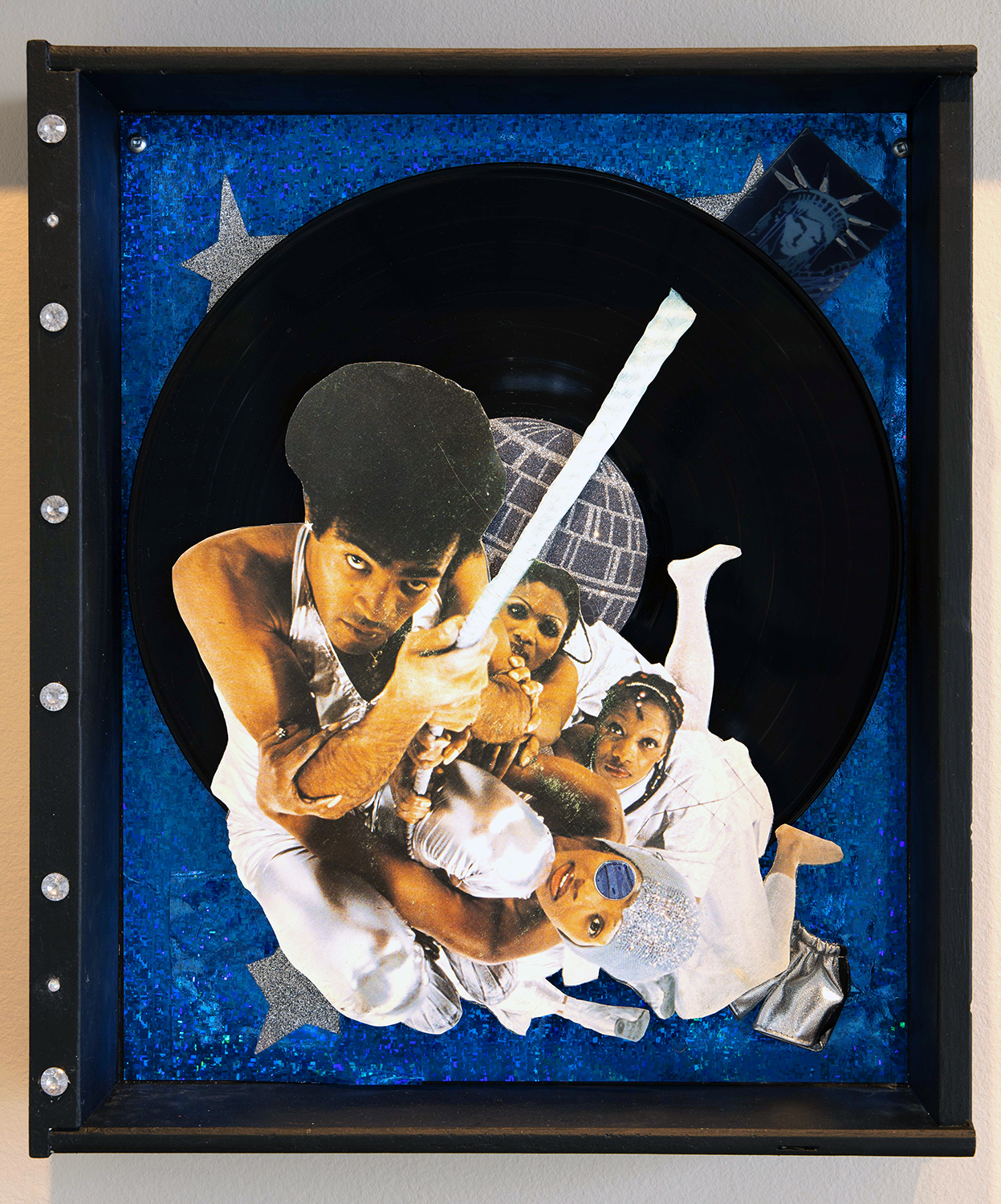 Untitled (Disco Ducks) is an homage to the popular dance music known as disco and a representation of this flamboyant, heady and glittering dance sound. Disco inspired fashion and movies, and was the precursor to late night club culture of the 1970s. In New York, it ruled the famed club Studio 54, which became the epicentre for this genre of music until it closed in 1980. Similar to It’s a Boys Club, this work reconsiders the labeling that we impart on various cultural forms.

Music, like visual art, has a way of blurring boundaries. Rock and roll has its roots in Wagner, blues and African American slave music, to name a few. Disco was said to be in contrast to rock and roll, and the cool factor that it held. Waltz, polka, line and square dancing, like disco, are not only music to enjoy by listening, but music that is best enjoyed through dancing.

The music group Boney M can be seen in the shadow box. Their Euro-Caribbean sound was a fusion of disco, R&B, and reggae. 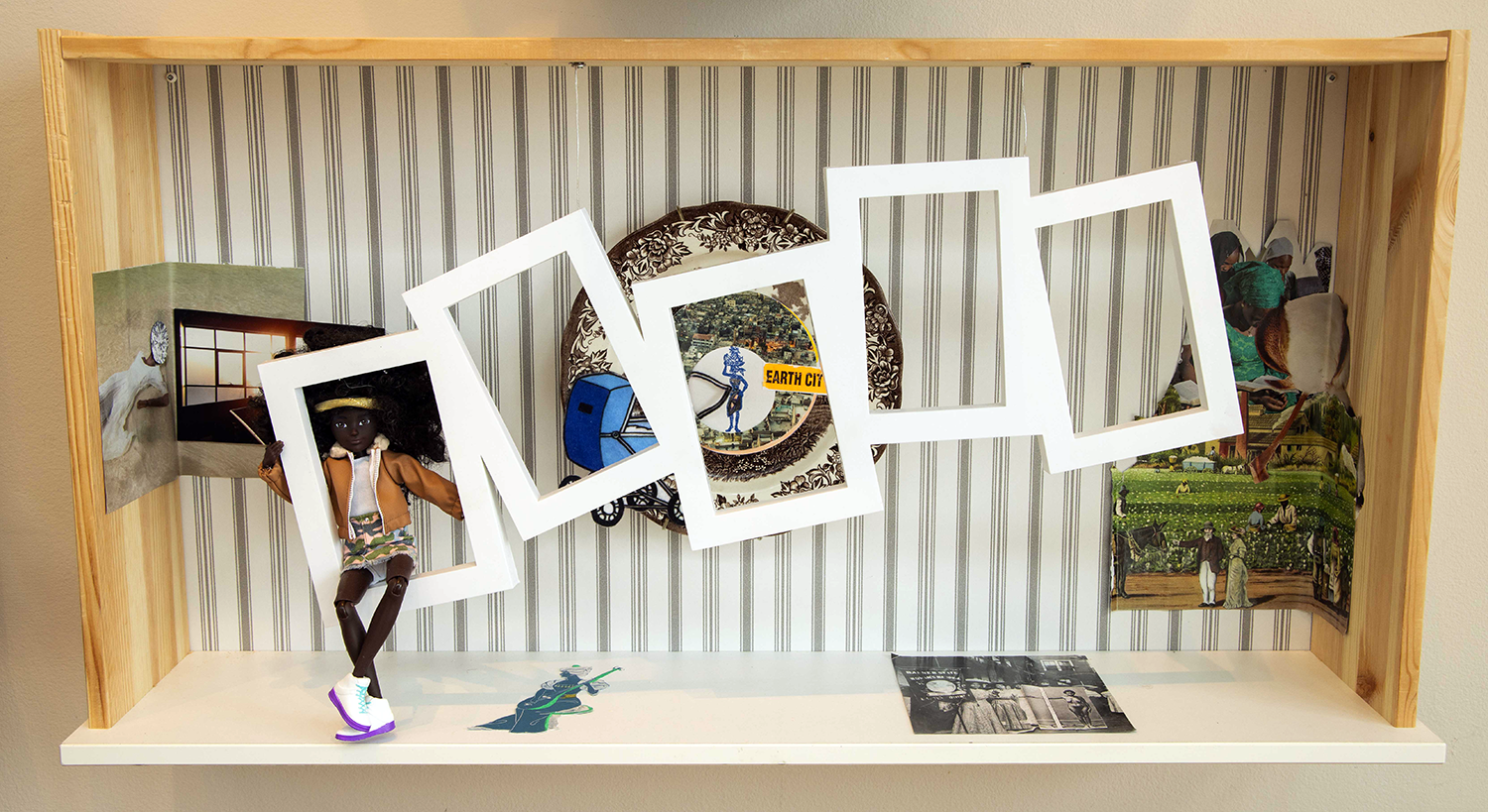 Untitled (Sheroes and the Everyday Lives of Black Women), 2021

Untitled, (Sheroes and the Everyday Lives of Black Women) validates the power and quiet determination that Black women have brought to their families, communities and the world at large.

Among their many other accomplishments, these women raised families, participated in the women’s suffrage movement and raised the quality and aesthetic diversity of fashion.

Their commitment to their churches and to independence for all women of colour is inspiring and monumental. While names like Queen Latifah may be well known, there are so many women who came before and paved the way for your grandmother, aunt, mother, and Sistah to double down on adversity and rise to the occasion. 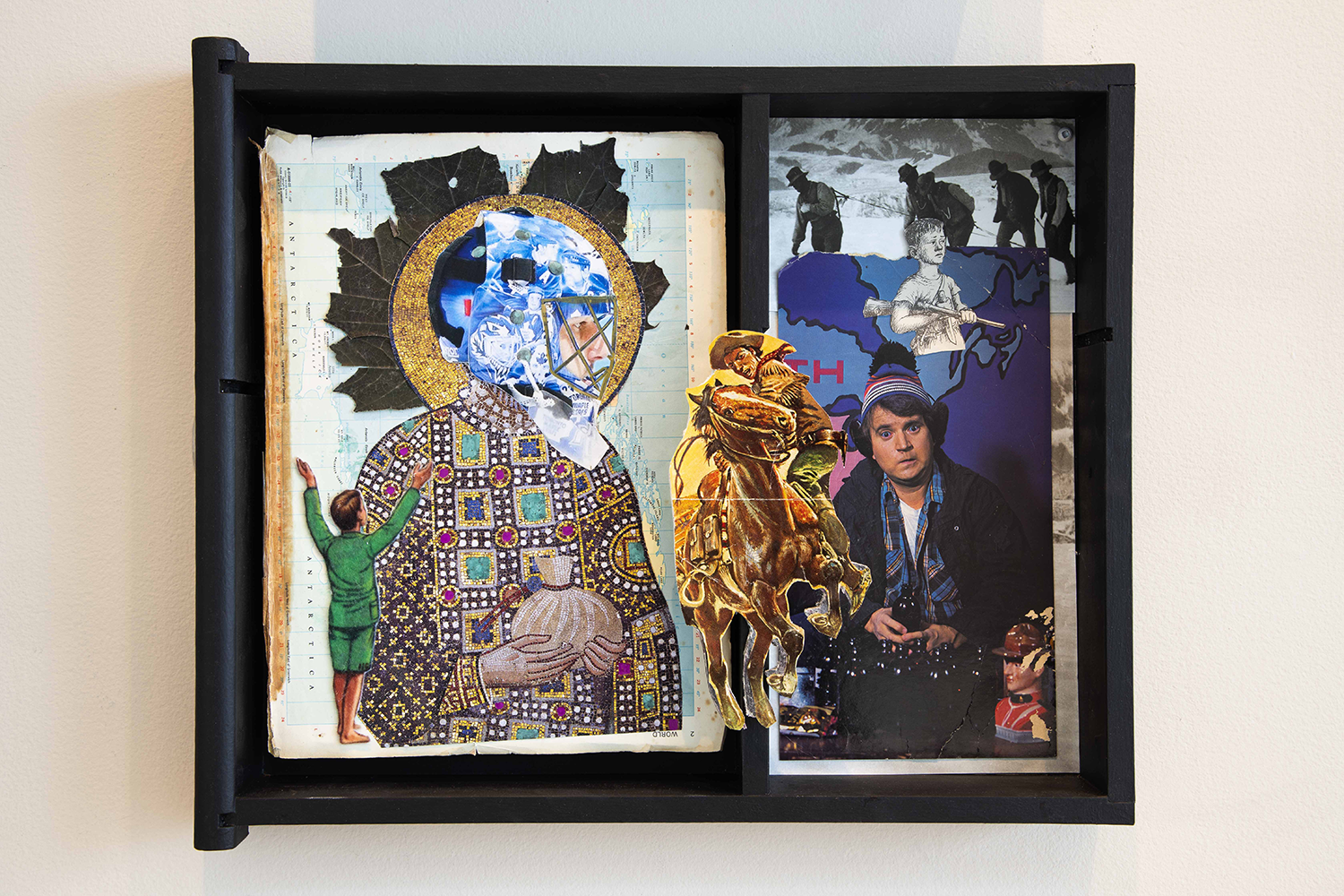 Hockey is heroic, patriarchal, exciting and is as Canadian as the maple leaf.

In 2011, I began to play shinny hockey. Under this informal structure, if teams exist they are usually not part of a registered league. Players range from amateurs to new players with minimal experience. I am a fast skater, but have no skill in stick handling.

Every Saturday night from 2011 to 2014 I played shinny for about ninety minutes. Generally, the men and women I played with had grown up with this game. They continue to play in leagues all across Canada, on outdoor ponds in the winter and on roads and driveways during the summer.

Hockey is an extremely male dominated sport. Women and racialized communities have not been given the access that white players have received. Recognition of this fact is necessary to make hockey, Canada’s favourite game, truly open to all.

The other part of this artwork is a tribute to the contributions of Second City Television. SCTV, as it was more fondly known, was a variety show that satirized and highlighted the banality of everyday Canadian culture, in particular Canadian television. It was a TV show about television shows—the news, variety shows, soap operas and talk shows were the target for much of the sarcasm, irony and mockery of this sketch comedy.

SCTV began its life in Canada and ended as a popular American TV program. It was the launch pad for actors like John Candy, Catherine O’Hara, Eugene Levy and Martin Short to name a few. It has been suggested that programs such as Trailer Park Boys, Letterkenny, This Hour Has 22 Minutes and The Daily Show owe a great deal to the low budget antics of SCTV.

With this exhibition, Barrie-based artist Sean George reconsiders what a monument might be at a moment when the idea of the monument itself is in question. Made during the COVID-19 pandemic and a year of activism against anti-Black violence and racism, the work reflects both ambivalence and optimism about how public space can be used to memorialize movements as diverse as disco, Black and Indigenous suffragist and feminist movements, AIDS and global folk art. Constructed in dresser drawers, briefcases and shadow boxes, these tactile works gather pop cultural artifacts, historical imagery, and highly personal mementoes such as IV bags and correspondence. Deeply collaborative in his artistic practice, George also works with Erin Lees Caribou, memorializing her resilience as an Afro-Indigenous woman who grew up in nearby Tottenham.

Two columns form this installation, the first representing men and the second women. Between the two, a curtain of glass bottles and IV bags are suspended. Glass is what’s known as an “amorphous solid,” meaning that its state of being is somewhere between a liquid and a solid. Formed from heated silica, or sand, George finds the alchemical nature of glassmaking comparable to processes of social transformation in our contemporary age. Put simply, simple binaries no longer hold. Interwoven between the bottles are IV bags, medical tools designed to fight dehydration and deliver life-saving medicines. While at first glance both bottles and IV bags might be intimidating, both are intended as healing gestures for a difficult time.

In an open letter to George Floyd, written earlier this winter, George writes: “I decided to walk home in some form of mindful protest after you were killed. At 12:15 am I took my achingly thin chicken legs and began my sojourn from downtown.” As Sean George walked the streets, he reflected on a monument expansive enough to hold the ambivalent, violent and erased histories so present, still, in George’s everyday life as a Black, gay man. Ultimately hopeful, George writes: “In spite of our flaws, our defects, misdemeanors of human nature, George Floyd, your life is part of a tipping point of change. A walk towards a more open, understanding and humane future. A walk towards the universal.”

In conjunction with Monuments, Memories and Missing Passages, we invite youth to learn and create through our Sensational Still Lifes from Solitude virtual workshop. Designed by the artist with step-by-step instructions, this activity can be completed at any time with materials that are commonly found at home.

This project investigates the still life, a genre of art that has been used by many artists to represent everyday objects. Still lifes are often created as references for further works of art, like painting, drawing, photography and more, but can also be considered artwork by themselves. They have the capacity to help us engage in the act of seeing (not simply looking, but really perceiving the things that are in front of us, in detail), to help us consider elements of composition and design, and to symbolically represent many narratives or themes, like life and death.