Portraits from the MacLaren’s Permanent Collection

The art of portraiture is a subtle one, evolving over time from stately portraits of power to contemporary works that challenge notions of beauty and identity. This exhibition features works from the MacLaren’s Permanent Collection that demonstrate how artists working across diverse media approach this venerable genre. 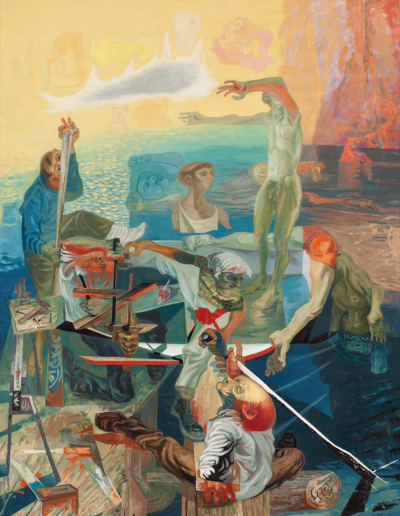 Fred Hagan’s practice engaged in the themes of Canadian history, geography and culture, and derived inspiration from the rocky hills… 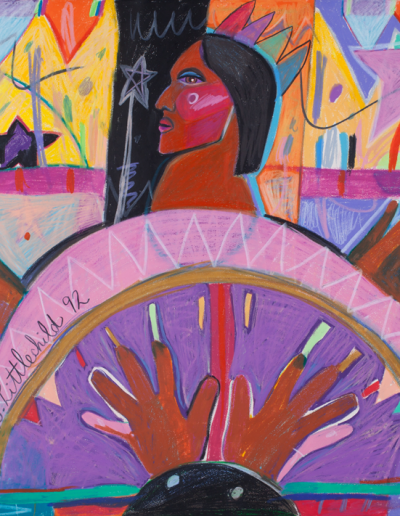 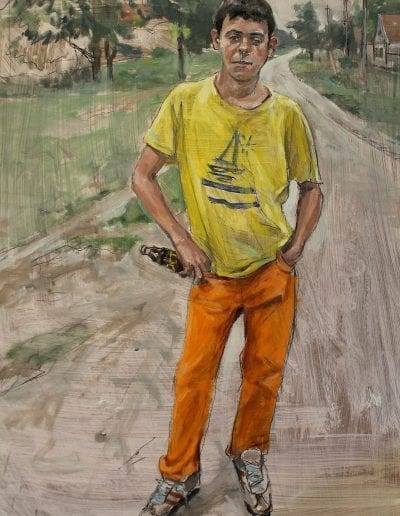 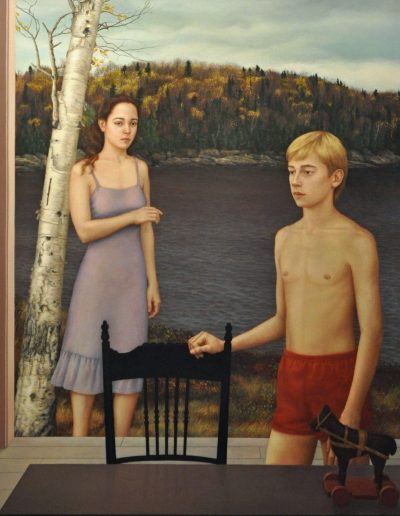 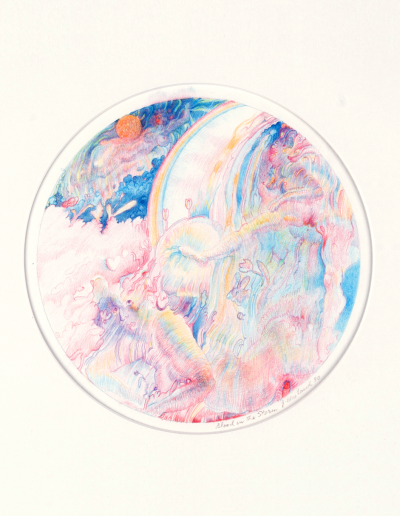 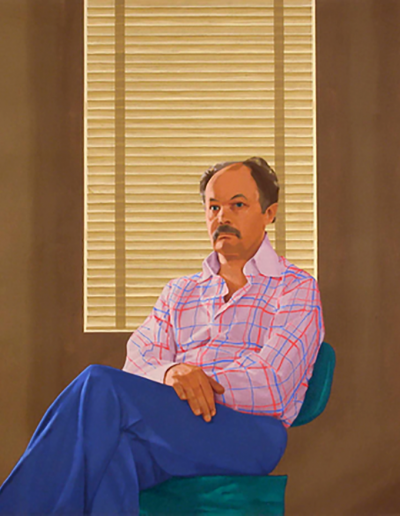 Valerie Palmer is a Michipicoten Bay-based painter whose realist works situate her human subjects in the psychologically charged landscapes and domestic environments of Northern Lake Superior. Palmer’s Clouds (1990) features two figures, one female and one male, their bodies turned towards each other but their gazes shuttered and introspective. Both are in transition between childhood and adulthood: the boy’s features are hardening into the chiseled contours of adolescence, while the girl’s figure is softening into feminine curves. A sense of unease is accentuated by the painting’s strange perspective and the layering of a flattened interior scene over a richly detailed landscape outside.

Joyce Wieland’s Blood in the Storm and Birth of Newfoundland form part of a series of sensually charged drawings from her mature period, when she explored self-invented mythologies, personal histories and female sexuality. Drawn in opalescent colours, these works render goddesses, blooming flowers and sea creatures in aqueous realms. Their presentation in a circular format alludes to organic, sensual shapes found in nature.

A rose-tinted tidal wave is a life-giving force in Blood in the Storm; buds of flowers emerge from the foam. By treating water—and blood—as points of origin, Weiland imbues this drawing with autobiographical inflections. As a child, Wieland would tend to her mother, stricken by uterine cancer, by cleaning bedpans and replacing sheets. In this deeply intimate work, blood and water symbolize the climactic forces of life and death. Birth of Newfoundland is a delicate drawing of a goddess who sits on a wave next to a whale, surrounded by a school of fish and celestial bodies. It was created in response to Weiland’s divorce from artist Michael Snow, a period of rebirth which inspired works that explored themes relating to female primacy and agency.

Joyce Wieland was the first living woman artist to receive a solo exhibition at the National Gallery of Canada, Ottawa and a retrospective at the Art Gallery of Ontario, Toronto. Her works are held in the collections of the Philadelphia Museum of Art, the Montreal Museum of Fine Arts, and the Agnes Etherington Art Centre, Kingston. Wieland was born in 1930 and passed away in Toronto in 1998.

Phil Richards is a Canadian portrait artist whose commissions can be found throughout Canada and internationally. Featured here is Janusz Dukszta, a Polish-Canadian patron of the arts, psychiatrist and former politician. Since 1953, Dukszta has commissioned portraits in mythological, religious and contemporary modes, acquiring a collection of over 100 works by leading Canadian artists. Dukszta’s portrait collection is a visual biography, a shifting and animated record of his life. Janusz in Office offers a glimpse of Dukszta’s role as a doctor. Richards has captured Dukszta’s contemplative expression, fashionable clothing and elegant posture, revealing the interior values of this committed activist and medical practitioner.

Phil Richards studied at the Ontario College of Art and Design. Commissions include the Jubilee Portrait of Queen Elizabeth II and former Ontario Premier Bob Rae. His work is held in the collections of the Art Gallery of Ontario, Toronto; the Robert McLaughlin Gallery, Oshawa; and the Kitchener-Waterloo Art Gallery. Richards’ whimsical Grand Illusion (1985-1987), a major public work initially installed at Toronto’s Eaton’s Centre and now in the Permanent Collection of the MacLaren Art Centre, is on long-term display at the Barrie Public Library. The artist lives and works in Toronto.

Consider the mobile, mutable face of someone you love: how it changes according to a mood, the angles from which it is viewed and under the lighting that flickers across it. The art of portraiture is a subtle one, evolving over time from stately portraits of power to contemporary works that challenge notions of beauty and identity.

This exhibition features works from the MacLaren’s Permanent Collection that demonstrate how artists working across diverse media approach this venerable genre. Spanning documentary photographs to commissioned paintings to enigmatic self-portraits, this exhibition highlights the inherent challenge of portraiture: how do we capture a subject, when our subjectivity is always in flux?