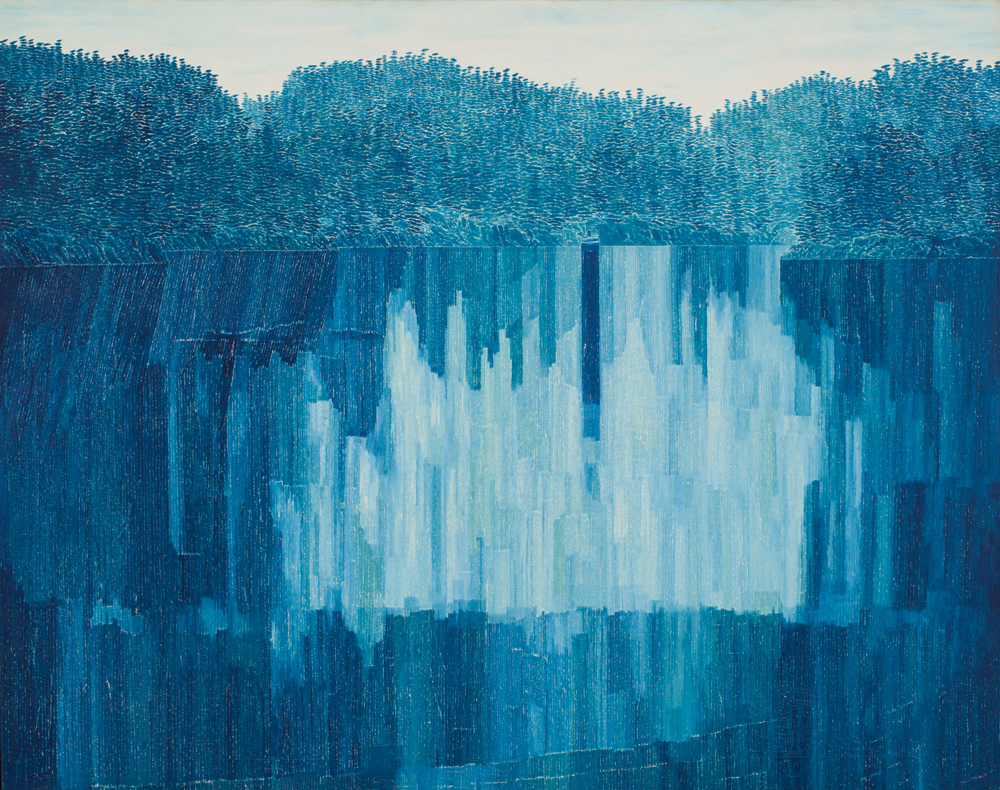 Kazuo Nakamura (b. 1926, Vancouver) was a renowned Japanese-Canadian artist and a member of Painters Eleven, a group of modern artists who spearheaded abstract expressionism in Canada in the early 1950s. Unlike the members of Painters Eleven—whose practice employed vibrant, gestural and non-objective stylistic approaches to painting—Nakamura’s work was monochromatic, methodical and meditative. Nakamura studied art at the Central Technical School, Toronto.

Blue Reflections, B.C. (1964) is a melancholic painting of a dense forest enclosing a lake painted in a subdued blue colour palette. Despite its serene beauty, this painting references a national atrocity and traumatic event in Nakamura’s life. As a teenager, Nakamura, alongside thousands of Japanese-Canadians, were dispossessed of their homes and incarcerated in camps across the country. During his internment in Tashme, the largest internment camp in Canada, Nakamura taught himself to paint landscapes, exploring the tensions felt by viewing nature’s vastness against the reality of living in forced confinement.

Although Blue Reflections, B.C. alludes to the experiences of trauma, dispossession and oppression, the work derives inspiration from Nakamura’s life-long interests in nature, science and mathematics. In this work, these intellectual motivations are articulated in the rhythmic patterns found in the repetition of trees and their fractured reflections cast upon the water.

Nakamura has exhibited his work at the Albright-Knox Art Gallery, Buffalo; the Brooklyn Museum, New York; and Musée d’Art Moderne, Paris. The Art Gallery of Ontario mounted a major retrospective of his work in 2004. His work is represented in the collections of the British Museum, London; the Museum of Modern Art, New York; the Hirschhorn Museum, D.C.; the National Gallery of Canada, Ottawa; and the Winnipeg Art Gallery. During his life time, Nakamura received numerous accolades, among them an honourary fellowship from the Ontario College of Art and Design. He passed away in Toronto in 2002.