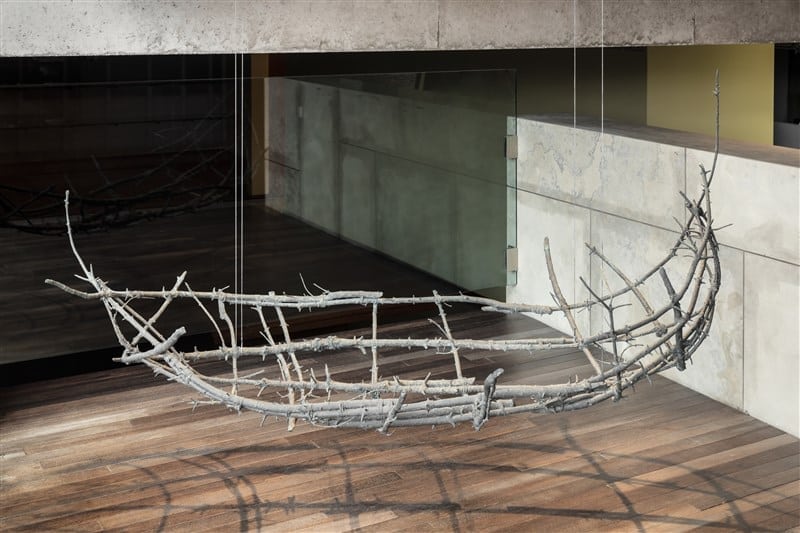 Bronze demonstrates many of the ecological concerns that have driven Alberta-based artist Peter von Tiesenhausen throughout much of his career. His works are site-specific, process-based and experimental, incorporating natural elements such as wood or ice with discarded industrial materials. Long interested in aspects of environmental sustainability, the artist achieved critical acclaim in 1997 when he registered a copyright on his Alberta property as an ecological artwork, preventing the construction of an oil pipeline through it.

Bronze is based on Floating Form, a larger boat form that was initially installed high in the trees behind the MacLaren’s previous location on Toronto Street. Created specifically for that site, this intervention into the landscape incorporated fallen branches and other gathered materials he found there. Bronze is inspired by this work, but its origins are in a discarded Christmas tree that von Tiesenhausen transformed into a boat and cast using a plaster mold. He then burnt out the wood of the original tree by pouring molten bronze into the hollow mold. Rather than appearing polished with a more characteristic bronze patina, Bronze looks rough and eerily natural; unlike Floating Form, however, it has a permanence that von Tiesenhausen’s more ephemeral works lack. This work is on semi-permanent display on the Mulcaster St. landing. Its position there wryly comments on the natural materials incorporated in the MacLaren’s building—marble and polished teak—interrogating the ways in which the Canadian landscape has been altered and domesticated in recent years.

Peter von Tiesenhausen has exhibited his work extensively throughout North America and Europe, with participation in over fifty solo exhibitions and sixty-five group exhibitions. In addition to numerous honours and awards, von Tiesenhausen was the 2015 recipient of the Lieutenant Governor of Alberta Distinguished Artists Award. He lives and works in Demmitt, Alberta, where he was instrumental in the creation of the LEED-certified Demmitt Hall cultural centre.