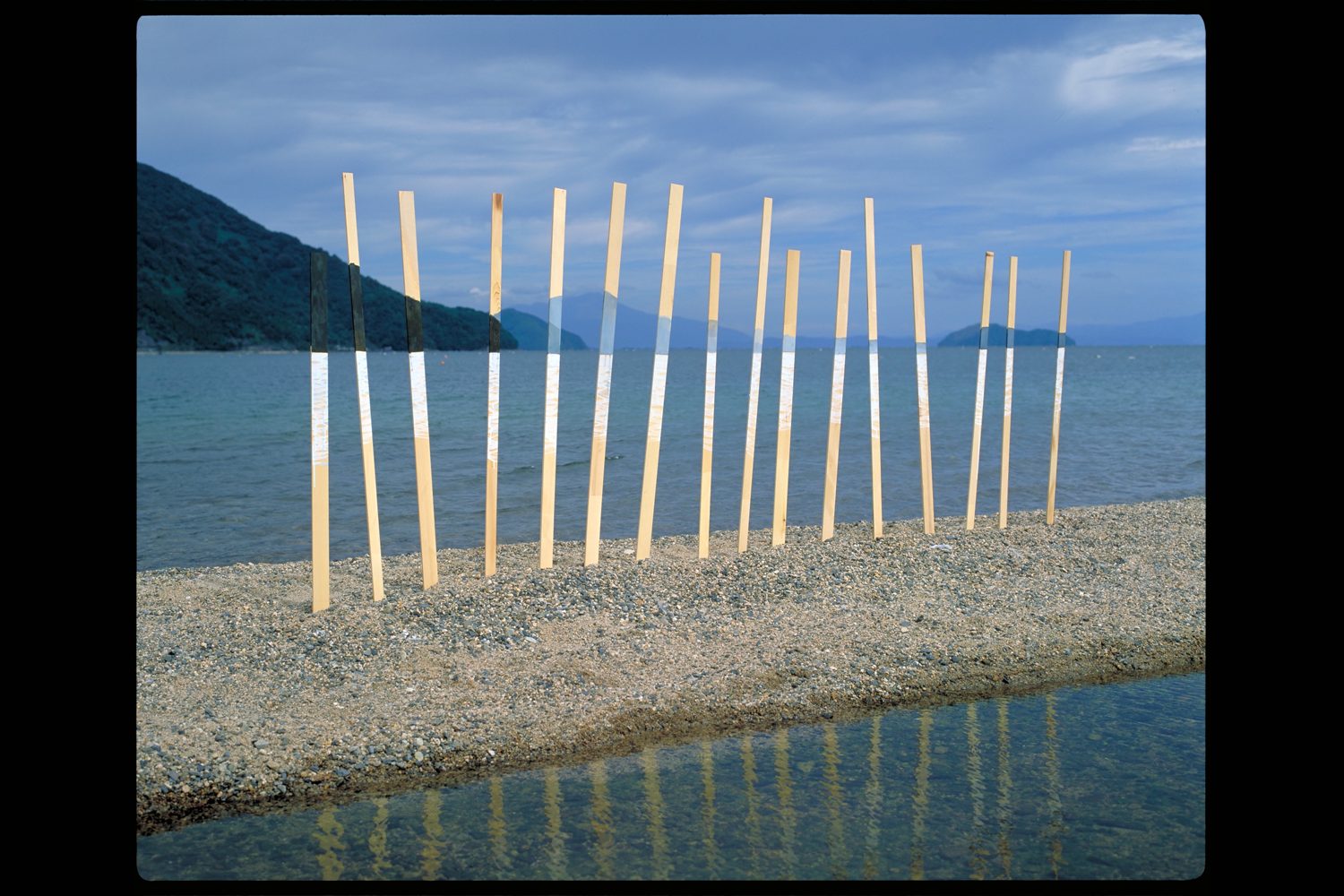 Born in Japan in 1935, artist Akira Komoto survived the devastation of World War II and came of age during the Allied Occupation of Japan and the democratization and demilitarization that followed. He is best known for his photographic series seeing, begun in 1974, documenting painted constructions obscuring and bleeding into the landscapes they are situated within. Inspired in part by the traditional Japanese custom of ukiyo-e, woodblock prints and paintings known as “pictures of the floating world,” this body of work also demonstrates Komoto’s deeply meditative response to Japanese avant-garde practices that emerged out of the post-war period.

Komoto’s earliest works were performances that linked site to small but meaningful interventions, including The Correspondence of White Smoke from a Cessna Plane 1,000 Meters above the Ground with a 340 m x 10 cm Piece of Fabric Tape on the Ground (1972). Photography was used to document these ephemeral performances, and it wasn’t until the first of this series, seeing 74-1 (1974) that Komoto approached the medium as an autonomous art form. seeing 90-10 was made eighteen years after this first image, and yet it follows the same internal logic as that first image. A series of islands fading into blue are obscured by a row of staves sunk into a gravelly spit extending across the bottom third of the image. Komoto has painted the staves in a trompe l’oeil effect, creating a dissonant figure-ground relationship between near and far distance. Unlike the documentary function of Komoto’s early photographs, photography is an integral element to these provisional earthworks: it’s the camera that mechanically collapses perspective, and the film’s limited spectral sensitivity that blends artificial and natural colours.

The seeing series ultimately proved to be Komoto’s life’s work; he continued to construct and photograph these images until failing health prevented him from working. Akira Komoto’s work has been shown in numerous venues in Japan and internationally, including the National Museum of Modern Art (Tokyo), the Museum Kunstpalast (Germany) and the Victoria and Albert Museum (London), and was the subject of a major touring show organized by the MacLaren Art Centre in 1994. In addition to his artistic practice, Komoto taught at the Joshibi University of Art and Design in Tokyo.  He lived in Kyoto, Japan.

Akira Komoto passed away in June of 2017. This Art of the Month is presented in his memory.