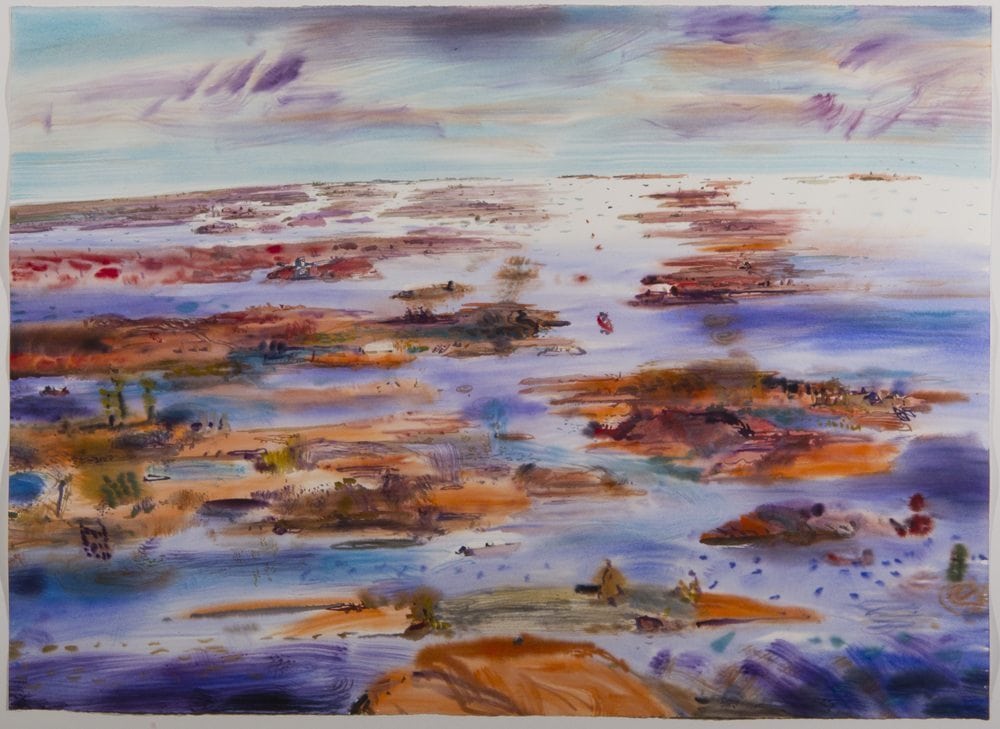 Shore Line Over View illuminates the ways in which regional artist John Hartman enlists diverse artistic methods and media to translate his lifelong engagement with Georgian Bay. Each stage of the creative process is addressed in this project, from photographs and preparatory drawings to sketch books and completed artworks. In addition to featuring some of Hartman’s most recent work, among them new watercolour paintings and a suite of six colour drypoints, Shore Line Over View includes his watercolour sketchbooks, large-scale watercolour studies, and graphite sketchbooks in Coptic and accordion-bound formats. Collectively, the elements in Shore Line Over View give viewers insight into Hartman’s translation of immediate vision into finished works of art.

Hartman’s unique approach to his subject integrates non-physical, narrative elements into specific physical geographies. While the setting in his watercolour The Petrinos at Cunningham’s Channel (2011) is recognizable and concrete, the introduction of ghostly apparitions supports the artist’s interest in storytelling. This flexibility of vision allows Hartman’s landscapes to transcend the specificity of time.

John Hartman was born in Midland, Ontario in 1950 and studied fine art at McMaster University in Hamilton. He spends each summer working directly from nature in an archipelago of islands on the eastern shoreline of Georgian Bay near Britt, Ontario. While Hartman’s touring exhibition, Cities (2007 to 2009) focused on aerial views of cities in Canada and around the world, shorelines and bodies of water remain a major element in these works. Hartman currently lives and works in Lafontaine, Ontario and is represented by Nicholas Metivier Gallery in Toronto.