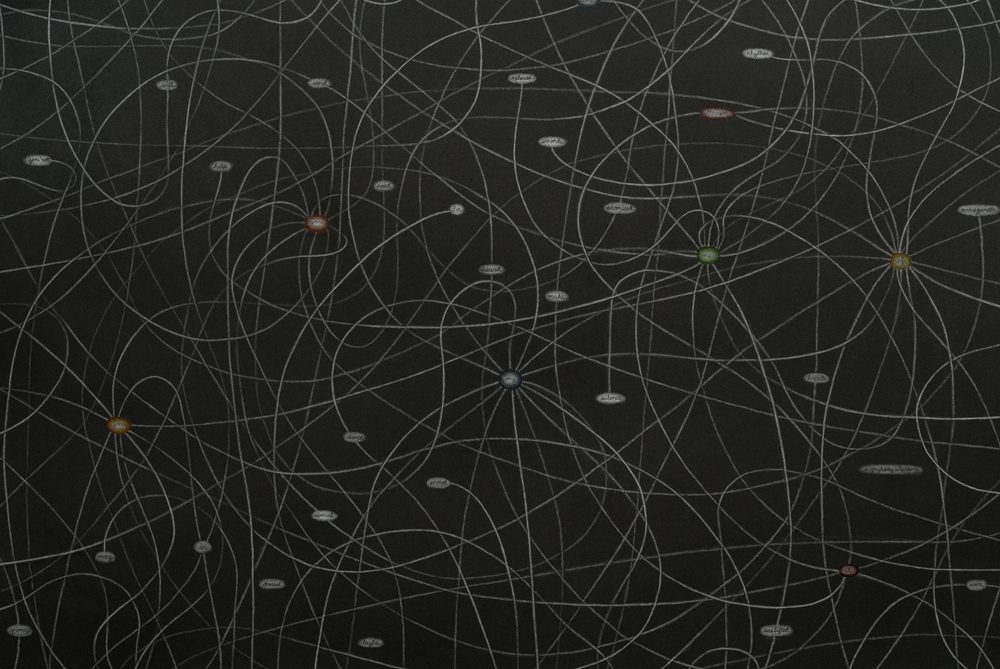 shimmy features recent works by David Merritt that explore aural experience and the performative aspects of language. In this drawing-based project, Merritt focuses ontitles from popular songs, mined from databases and music industry charts. Crisscrossing musical categories and genres, his linguistic mapping traces trends across time and space. Among the new drawings is a re-charting of the BMI list of their 100 top airplay songs of the 20th century and a series of works amassing song titles that contain the words “love”, “last train”, “ here” and “now”. Merritt’s drawings are accompanied by the more physical “airplay” of his sisal sculptures, and related video and audio work. Unraveling a skein of sisal rope, the artist gently reworks the loosened fibres to form meandering lines of cursive scripts. As visual arts critic Peter Goddard has commented, “Two aspects of David Merritt’s work are visible, if only just barely… the third is something you listen for in the gallery but hear only in the imagination.” David Merritt holds a BFA from the University of Western Ontario and an MFA from Nova Scotia College of Art and Design. His work has been exhibited in galleries nationally and internationally, including the Art Gallery of Ontario, the Textile Museum of Canada and TENT CBK, Rotterdam. Merritt is based in London, Ontario, and is an Associate Professor in the Department of Visual Arts at the University of Western Ontario. He is represented by Jessica Bradley Art + Projects, Toronto. A full colour catalogue documenting the artwork in Merritt’s touring show will be published by Museum London in collaboration with the Art Gallery of Hamilton, the MacLaren Art Centre and the Art Gallery of Windsor.

Organized and circulated by Museum London