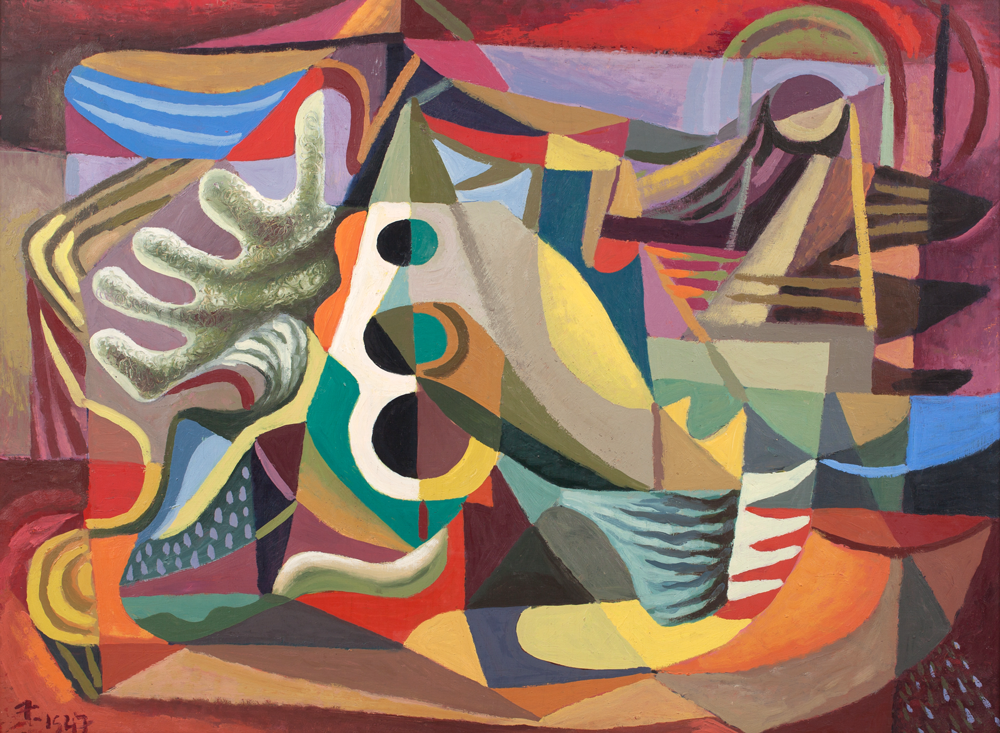 Michael Forster was a British-Canadian artist and a gifted exponent of Surrealism—a global 20th century art movement that aspired to liberate the mind’s creative potential from rational inhibition—in Canada. Born in Kolkota, and schooled at Central St. Martins in London, England, Forster would relocate to Toronto in the late 1920s in hopes of escaping the Great Depression’s economic fallout in Europe. While living in Toronto, Forster attended the Canadian National Exhibition in 1938, where the display of Surrealist works left an indelible mark on his practice.

Over the course of his six-decade career, Forster sojourned in the United States, Mexico and the Virgin Islands. Beach Forms in Red (Virgin Islands) Charlotte Amolie U.S.V.I. is a painting of a fragmented beach scene. Biomorphic forms suggestive of corals, waves and sand flow in and out of each other. In this dreamscape, space is compressed and nebulous forms are emboldened by colour. Charlotte Amalie is the capital city of the U.S. Virgin Islands and the site that inspired this animated painting of its beaches.

Forster’s work is collected by the National Gallery of Canada, Ottawa; Art Gallery of Ontario, Toronto; and the Canadian War Museum, Ottawa. He exhibited his work at the British Museum; the National Gallery, Washington; and the Stedelijk Museum, Amsterdam. The artist was born in Kolkata in 1907, then a colony of the British Empire and passed away in Cornwall, England in 2002.

In 1997 and 1999, the MacLaren acquired a large number of works by Forster, including ten canvases―some among the last the artist produced in Canada―and the only major collection of drawings and sketchbooks in public hands. These works on paper number in the thousands and span the artist’s career from the 1940s to the 1990s.