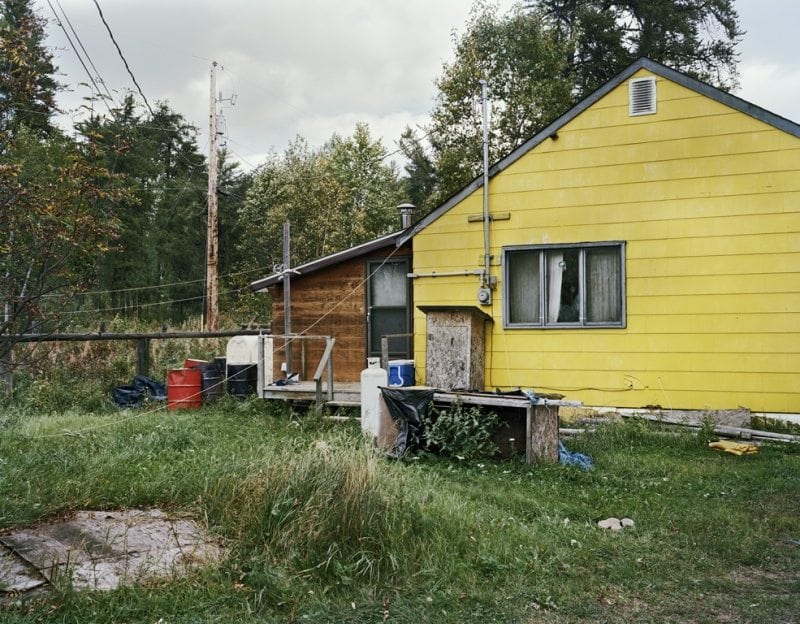 Joseph Hartman’s series of works entitled Return is a systematic exploration of the artist’s roots in the Northern Ontario Aboriginal settlements of Heron Bay (population 480) and Collins (population 60). His parents made their homes in both settlements in the years preceding and following his birth in 1978, and the Hartman family’s time in these communities quickly fell into familial lore. Over a period of three weeks in the late summer of 2010, Hartman returned to the area to both augment and interrogate his chimerical memories of the first years of his childhood. Here, we present two works from the series: The House We Lived In, Collins, Ontario (top) is paired with Meadow and Freight Train, Collins, Ontario (bottom) showing both Hartman’s former home and the field behind it.

In contrast to the sense of community the family remembers, Hartman’s photographs are empty of people and taken in a detached, documentary style that captures the distance he experiences from these formative memories. We are often admonished to “take only photographs and leave only footprints” in our travels; in Return, such impermanence seems inevitable.

Joseph Hartman was born in Barrie and raised, largely, in Lafontaine, Ontario. He has had solo shows at the MacLaren Art Centre (Return, 2012), the Campus Gallery in Barrie and Stephen Bulger Gallery in Toronto, which represents his work. His photographs are held in numerous private and public collections, as well as at the Art Gallery of Hamilton where he currently resides.