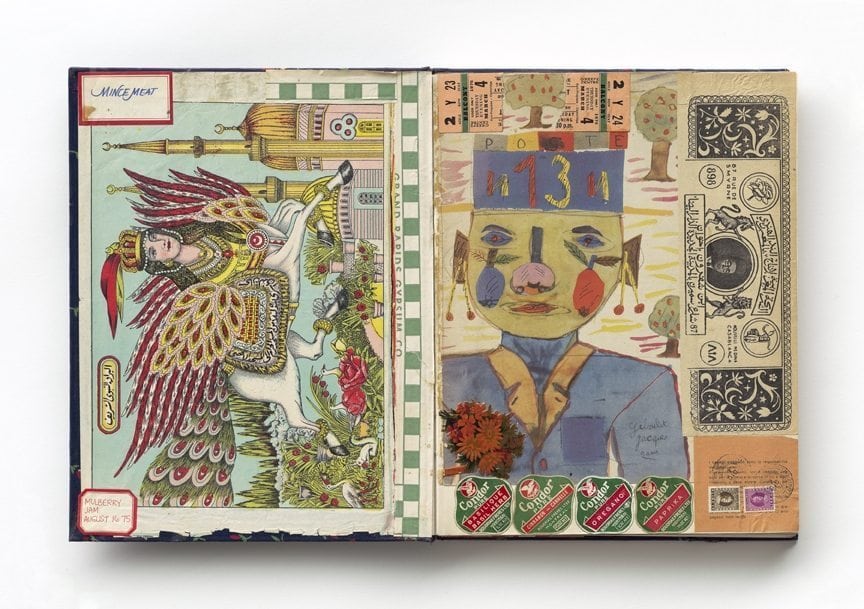 Arnaud Maggs, “Scrapbook (3)”, 2009, chromogenic print, 48.5 x 67.5 cm. Collection of the MacLaren Art Centre, 2010. Purchased with the support of the Canada Council for the Arts Acquisition Assistance program and a bequest from John Reesor

Arnaud Maggs’ Scrapbook (2009) is a four-part photographic series depicting page spreads of scrapbooks the artist began in 1975, but never completed. Revisiting the books thirty-six years later, Maggs documented his own personal archive of collected ephemera: bus transfer slips, deli numbers, luggage tags, claim tickets, etc. These photographs, which are among Maggs’ most personal work, continue the artist’s long-sustained interest in systems of classification and markings of time. Giving form to memories through accumulated objects, Scrapbook points to the human impulse to collect keepsakes in an effort to deny time’s passing.

Arnaud Maggs (1926-2012) was born in Montréal. His life as a fine artist began in the mid-1970s after a successful career in graphic design and commercial photography. Maggs’ work has been exhibited internationally and has garnered many prestigious awards including the Gershon Iskowitz Prize in 1991, the Governor General’s Award in Visual and Media Arts in 2006 and the Scotiabank Photography Award in 2012. In May 2012, Maggs was honoured with a major retrospective at the National Gallery of Canada.