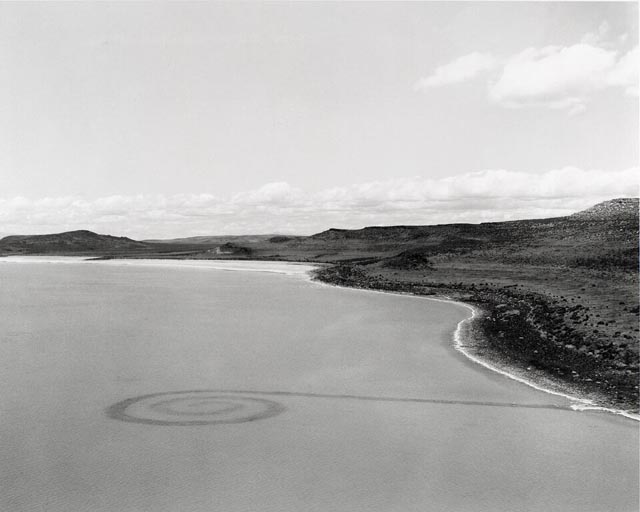 Mark Ruwedel is an American-Canadian photographer renowned for his austere black-and-white landscape photographs of the American and Canadian West—desert homes, abandoned railway lines and bomb craters left by military expeditions—that examine the manifold ways human activities shape the topography of the land.

In the early 1990s, Ruwedel visited and documented the sites of earthworks—large-scale and site-specific land art—by leading proponents of the Land Art movement, including American sculptors Michael Heizer, Robert Morris and Robert Smithson. Emerging in the 1960s and culminating in the 1970s, this radical movement disavowed the commodification of art. Employing natural materials, artists created sculptural works in remote locations; these works resisted the exchange-value assigned by the art market and became known through their photographic documentation.

Robert Smithson: Spiral Jetty, 1970, from Earthworks Portfolio is an aerial photograph of Spiral Jetty (1970), a major earthwork by Smithson. This large-scale and site-specific sculpture of a 1,500-foot and 15-foot-wide spiral is comprised of black basalt rocks, salt crystals and mud, located on Rozel Point peninsula and extends into the Great Salt Lake in Utah. Over the years, Spiral Jetty has submerged or emerged according to the water levels of the Lake. Ruwedel’s Robert Smithson: Spiral Jetty situates the landscape as dynamic archive that changes in response to environmental impacts.

Born in 1954 in Bethlehem, Pennsylvania, Ruwedel obtained a BFA from Kuztown State College in Pennsylvania and earned his MFA from Concordia University, where he would become a faculty member. His work is represented in the collections of the Metropolitan Museum of Art, New York City; the Tate Modern, London, England; and the San Francisco Museum of Art. He exhibited his work at the National Gallery of Canada, Ottawa; the Polygon Gallery, Vancouver; and the Recontres d’Arles. Ruwedel was awarded the Scotiabank Photography Award and a Guggenheim Fellowship in 2014. He lives between Vancouver and Los Angeles, where he teaches photography at California State University, Long Beach.