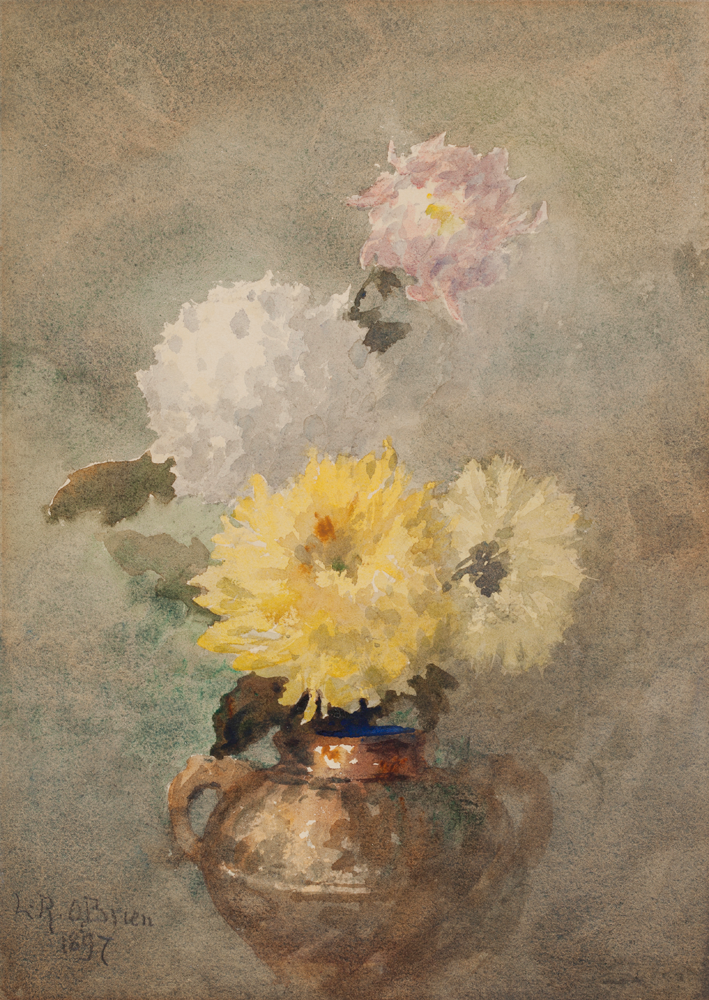 Lucius O’Brien (b. 1832, Shanty Bay, Ontario) was a preeminent 19th century Canadian landscape painter. O’Brien is attributed with founding and leading Canada’s first arts organizations, including the Ontario Society of Artists, the Ontario School of Art and the Royal Canadian Academy of Arts.

His most famous painting, Sunrise on the Saguenay, Cape Trinity, (1880), was among the first diploma works assembled by the Academy, which would become the foundation of the National Gallery of Canada’s collection. In addition, O’Brien was an art editor of Picturesque Canada: The Country as it Was and Is (1882), a two-volume travel-book of engravings derived from sketches by artists who surveyed the Canadian landscape.

Drawing inspiration from the American Luminist School, O’Brien’s oil and watercolour paintings reflect a fascination with the atmospheric effects of light. This untitled still life depicts a flower arrangement—likely Dahlias or Hydrangeas—painted in the hazy glow of a subdued colour palette. In a sharp contrast to his earlier, more monumental landscapes, O’Brien demonstrates in this work that even a sampling of flowers could be majestic when shown in the diaphanous light of a domestic setting. Painted two years before his passing, this untitled still life is evocative of his mature style, which shifted towards loose, light-filled watercolour paintings. This untitled still life is among the eight of the O’Brien watercolours from the MacLaren’s Permanent Collection that received conservation treatments from the Canadian Conservation Institute in 2016.

Lucius O’Brien studied drawing under the tutelage of John G. Howard—a surveyor, engineer and architect—at Upper Canada College, Toronto. Initially, O’Brien worked as a civil engineer and transitioned later on to an art practice in 1872. His works are held in the collections of the National Gallery of Canada, Ottawa; the Art Gallery of Ontario, Toronto; the Winnipeg Art Gallery, Manitoba; and the Royal Collection Trust, London, England. O’Brien passed away in 1899 in Toronto.