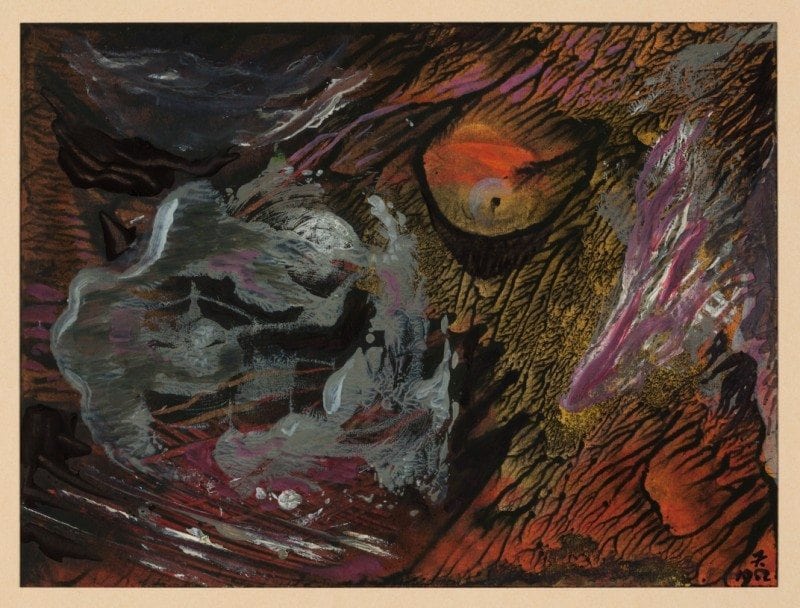 Called “Canada’s Pioneer Surrealist,” Michael Forster (1907–2002) is an intriguing yet enigmatic figure in Canadian art. Born in Calcutta and schooled in England, Forster relocated to Toronto in 1928 and was often on the move, with extended stays across Canada, the United States, Mexico and the Virgin Islands. He returned to Cornwall, England in 1975, where he lived the remainder of his life. In 1997 and 1999, the MacLaren acquired a large number of works by Forster, including ten canvases―some among the last the artist produced in Canada―and the only major collection of drawings and sketchbooks in public hands. These works on paper number in the thousands and span the artist’s career from the 1940s to the 1990s. Perpetual Emergence presents the full spectrum of Forster’s practice and evolution.

Perpetual Emergence begins with Forster’s early development as a Surrealist as demonstrated by his experimental drawings and painted studies. These intimate works evoke dream worlds and the realm of the subconscious. His use of acetone to redistribute the ink on magazine pages is particularly fascinating: the results are luminous. In his mid-career canvases, abstract compositions explode from the surface in palettes inspired by the landscapes of his childhood and travels. Eight late works loaned by Loch Gallery, Toronto, represent the Forster’s later years in Cornwall. These paintings usher in a new kind of emergence, in which light effects, celestial bodies, and weather express emotions and memories. Expressionist landscapes intermingle with the sorts of eerie vistas seen in early surrealist drawings. The peripatetic Michael Forster never stopped looking inward or onward.

The MacLaren owns approximately 50 sketchbooks that contain over 2000 drawings and sketches by Michael Forster. As an education initiative,  sketchbooks 52 & 54 were digitally reproduced: you can flip through Sketchbook 52 here and Sketchbook 54 here

A catalogue on Forster’s practice with contributions by Dennis Reid and Jennifer Withrow accompanies the exhibition, published in partnership with Messum’s Fine Art, London, England, Representatives of the Michael Forster Estate.