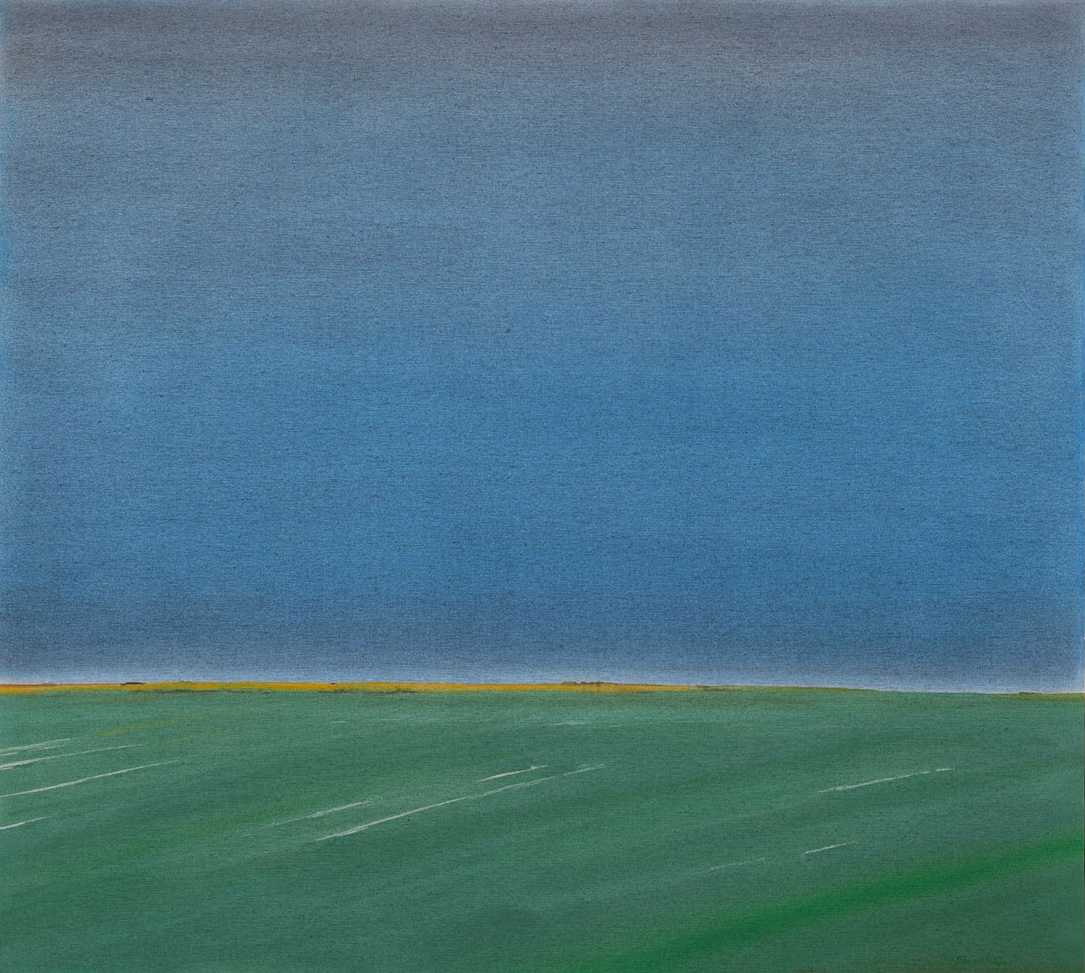 Takao Tanabe’s The Land (1976) is an assured painting of the prairie landscape, executed during Tanabe’s tenure as Head of the Art Department and Artist in Residence programme at the Banff Centre between 1973 and 1980. This work distils an already sparse prairie landscape into a transcendent meeting between plain and sky. Stripped of all non-human elements and rendered in a flat, but careful application of paint, the work reflects Tanabe’s training in abstract expressionism with Hans Hofmann at the Brooklyn Museum Art School, as well as studies in Japanese ink painting (sumi-e) with Ikuo Hirayama and Yanagida Taiun at the Tokyo University of Arts. Tanabe, who took the landscape as his primary focus in the latter half of his over sixty-year career, often paints scenes that reflect the unity of nature. Tanabe writes: “What I want is this completely unoccupied, pristine land, as though I’m the first person to see it. It’s lonely, it’s mysterious, it has wonderful appeal to me. I feel great kinship with it.”[i]

Tanabe was born in 1926 in Seal Cove, British Columbia. His early experiences of the Canadian landscape were informed by working summers with his father, a commercial fisherman. He and his family—alongside roughly 120,000 Japanese Canadians—were interned during World War II; afterwards, Tanabe attended the Winnipeg School of Art, where he shifted his ambitions from commercial sign painting to the visual arts. Tanabe travelled extensively and studied internationally between 1951 and 1972, spending time in Philadelphia, New York City, London, Tokyo and Vancouver, before returning permanently to western Canada. A recipient of the Order of Canada (1999) and a Governor General’s Award in Visual and Media Arts (2003), his work is held in many major collections, including the National Gallery of Art (Ottawa); the Vancouver Art Gallery; the McMichael Canadian Collection (Kleinberg); the Art Gallery of Ontario (Toronto); and others. Takao Tanabe lives and works in Parksville, BC.

This work is presented in honour of Asian Heritage Month in Canada, a time to reflect on and celebrate the contributions that Canadians of Asian origin continue to make.