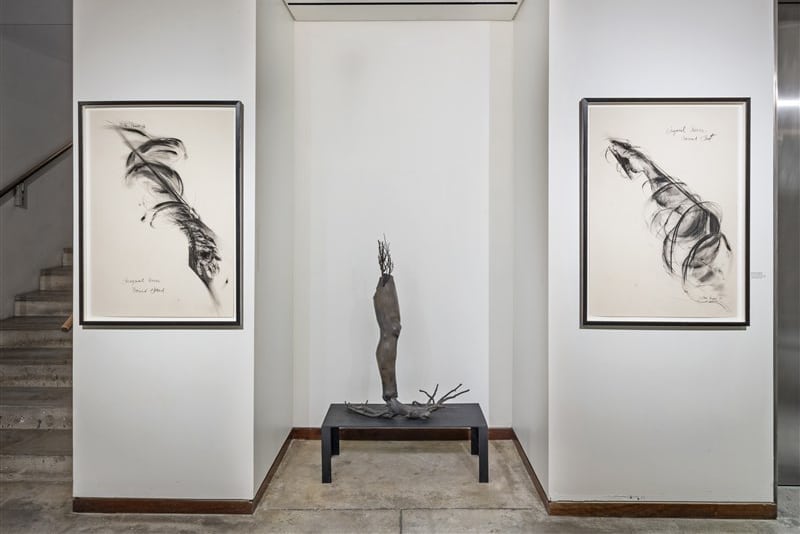 During the winter of 1990–91, I observed the fence posts being replaced on my daily journey along Highway 400 from Hillsdale to Barrie. I marveled at the tenacity of the workman, in subzero weather, with their busy little Bobcats uprooting the old fence and replacing it with new. This thin fencing, without great tensile strength yet solidly supported by the posts, was the division between the urban ribbon and the wildlife on the other side.

The human leg is similar in size and shape to the post. I slowly began to replace the post with the idea of the leg—an opportunity to re-root myself—to make physical a deeply personal comprehension that I was rooted in the ground in the same way as the post. The leg in my mind became part of the earth. Branches grew out of it, wire wrapped around it, birds nested in it —at one with nature, at peace, rooted.

So long removed from the maritime place that shaped my culture, I returned myself to place through the rooting of the leg. “A strained body and nervous mind” released its agitation and delivered “exultation”—to myself at least. The crisp geometry and metal surface of the base separates the state of desire from the reality of rootedness.

Marlene Hilton Moore has defined a distinctive profile in Canadian visual arts marked by outstanding achievements at local and national levels. She earned her reputation in the complex arena of public art and monuments. Hilton Moore’s most visible public artwork is the Valiants Memorial (2004–2006, co-created with John McEwen), a National Capital Commission for Confederation Square in Ottawa comprised of life-size bronze figures and busts set into a comprehensive site design. Moore lives in Hillsdale, Ontario.