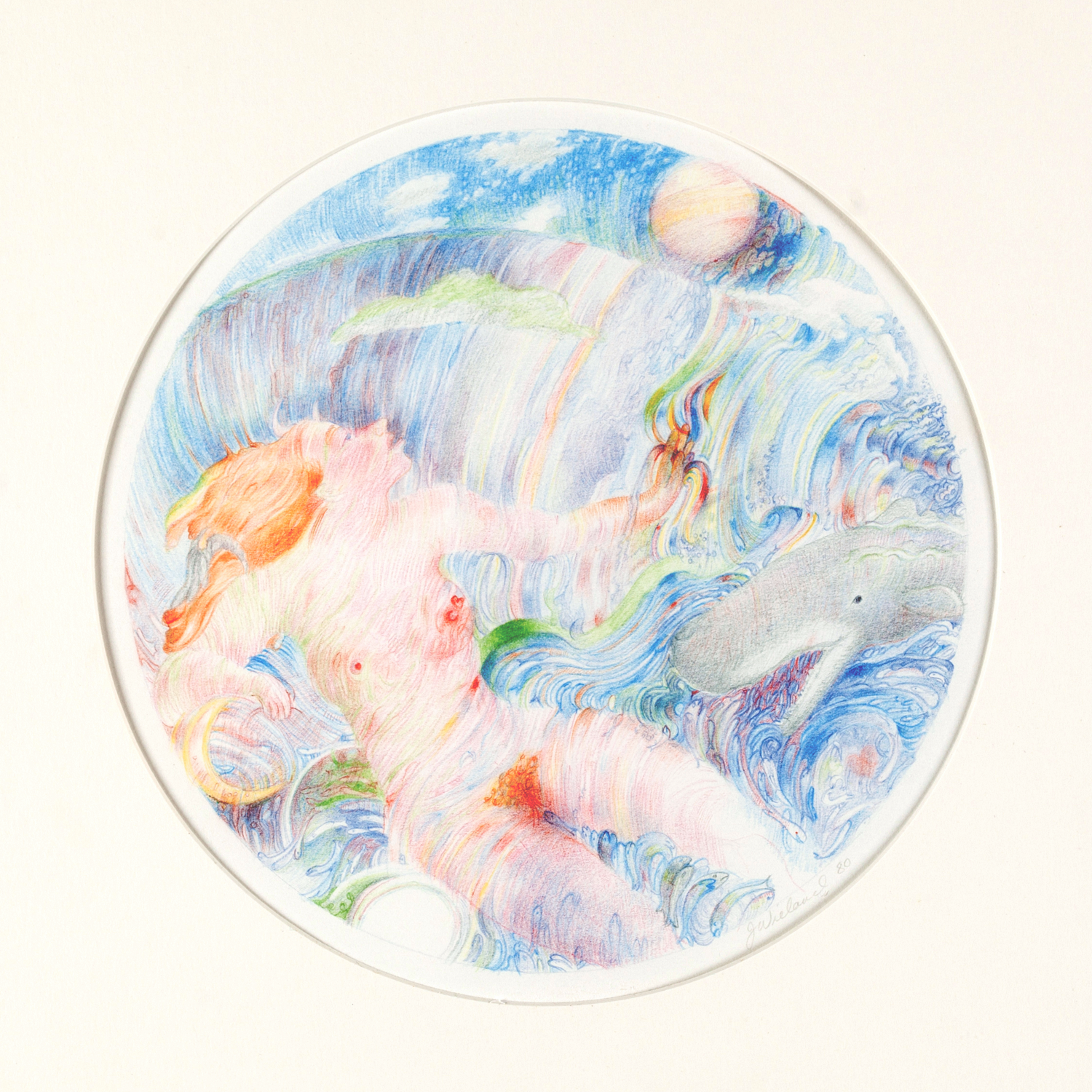 Joyce Wieland (1930-1998) is regarded as a trailblazing Canadian artist and experimental filmmaker. Wieland’s practice came into prominence during the 1960s, a period in North America marked by social upheaval, the anti-war movement, second-wave feminism and identity politics. Her iconic works—among them paintings, drawings, sculptures, textiles and films—addressed feminism, nationalism and environmentalism. She is lauded for redefining the limits of Canadian modern art, expanding its practices to include elements of craft and pop art.

Birth of Newfoundland (1980) forms part of a series of thirty-two sensually charged drawings from Wieland’s mature period, when she explored mythologies, personal histories and female sexuality. These drawings were featured in The Bloom of Matter, a 1981 solo exhibition at Isaacs Gallery, Toronto. These opalescent drawings render goddesses, blooming flowers and frolicking animals in otherworldly settings. These imagined narratives were drawn in circular formats, alluding to the earth and sensual, organic shapes found in nature. Birth of Newfoundland is a delicate drawing of a goddess who sits on a wave next to a whale, surrounded by a school of fish and celestial bodies. It was created in response to Weiland’s divorce from artist Michael Snow, a period of rebirth which inspired works that explored themes relating to female primacy and agency. When asked about the goddesses in these drawings, Weiland responded: “It is the heart and centre of myself, in a way. It really is me.”[1]

Joyce Wieland studied under painter Doris McCarthy at the Central Technical School in Toronto. Wieland was the first living female artist to receive a solo exhibition at the National Gallery of Canada, Ottawa (1971) and a retrospective at the Art Gallery of Ontario, Toronto (1987). She exhibited her works at the Museum of Modern Art, New York City; the Albright-Knox Art Gallery, Buffalo; and the Centre Pompidou, Paris. Her works are held in the collections of the Philadelphia Museum of Art, the Montreal Museum of Fine Arts, and the Agnes Etherington Art Centre, Kingston. In 1983, Weiland was made an Officer of the Order of Canada. She passed away in Toronto in 1998.

This Art of the Month is in honour of International Women’s Day, March 8.