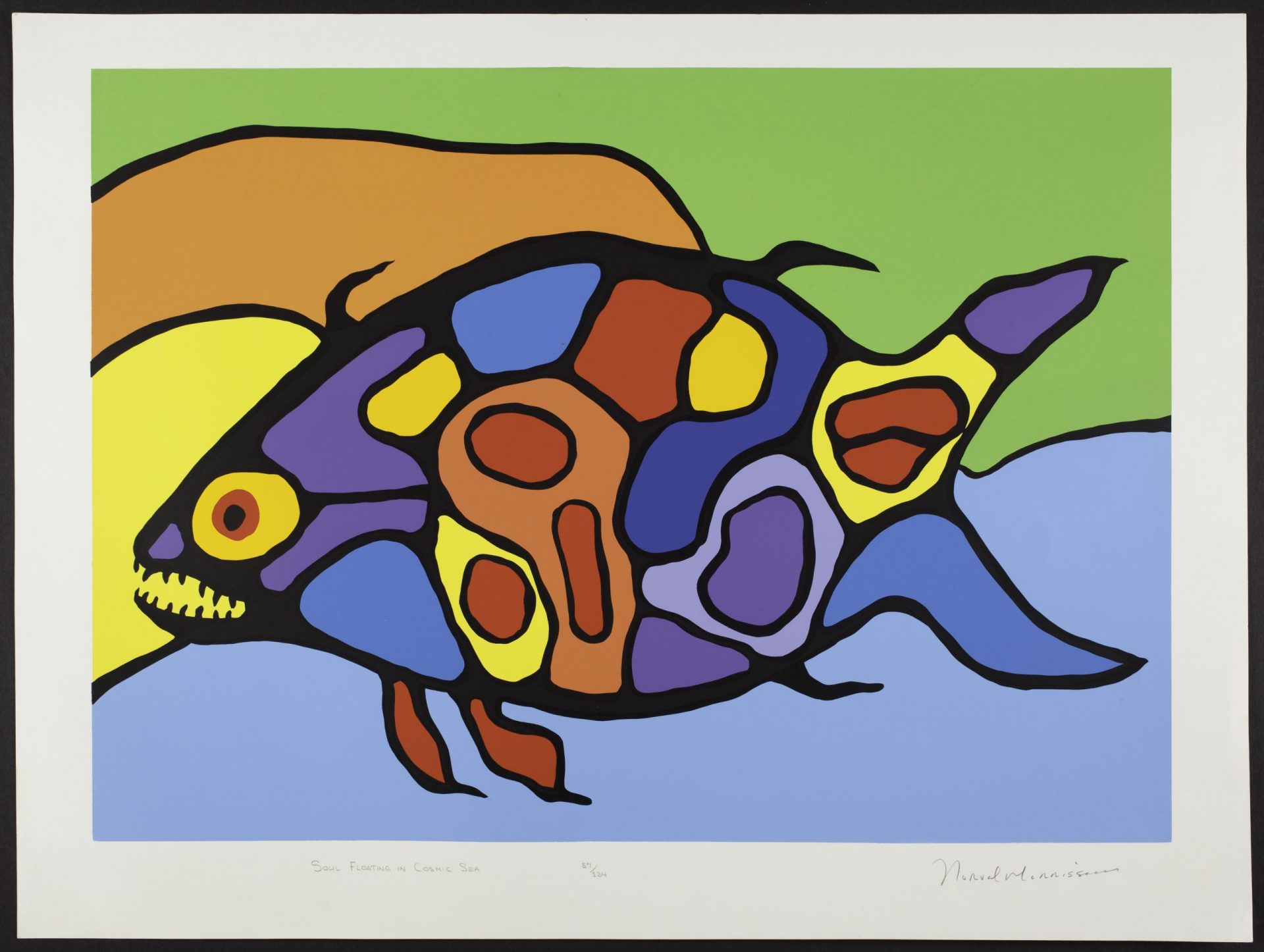 Anishinaabe artist Norval Morrisseau was born in 1931 and lived for much of his youth with his maternal grandparents in Bingwi Neyaashi Anishinaabek/Sand Point Reserve, near Thunder Bay, Ontario. A residential school survivor trained in both Catholic and Anishinaabe teachings, Morrisseau was an accomplished artist from a young age. His first solo exhibition in a commercial gallery—the Pollock Gallery, in 1962—sold out on its first day, and Morrisseau became an instant celebrity artist and public figure.

Many of Morrisseau’s well-known paintings and serigraphs are characterized by a flat application of bright paint; he developed this distinctive way of image making, known as the Woodland School, and it has since been taken up by his contemporaries, such as Daphne Odjig, Carl Ray, Blake Debassige and others. The imagery in his work reflects the importance of Anishinaabe ways of knowing, ideas of transformation, the spiritual symbolism of animals and concepts of self. At a time when Indigenous artwork was rarely displayed outside of ethnographic museums, Morrisseau was exhibiting in art galleries, challenging conventional understandings of contemporary art and helping to end the exclusion of Indigenous artwork from mainstream galleries.

Soul Floating in Cosmic Sea depicts the profile of a large fish, buoyant and centred in the image. The title suggests that this creature is spirit personified, travelling through an otherworldly waterbody. With saturated colours filling organic shapes outlined in graphic black, the interior of the fish is fully visible as if seen through x-ray, a common representational strategy within the Woodland School. The relationship of the interior and the exterior is closely linked, suggesting the interrelatedness of living things to the environments that sustain them.

Norval Morrisseau, also known as Copper Thunderbird, was named a Member of the Order of Canada in 1978 and a member of the Royal Canadian Academy of Art in 1973. In 1968 he won the Canada Centennial Medal. His work has been collected by numerous institutions including the McMichael Canadian Art Collection, the MacLaren Art Centre, the Royal Ontario Museum and the National Gallery of Canada. In addition to many of Morrisseau’s firsts, he was the subject of the first retrospective of a contemporary Indigenous artist at the National Gallery of Canada in 2006, Norval Morrisseau: Shaman Artist. Morrisseau passed away shortly afterwards in 2007.