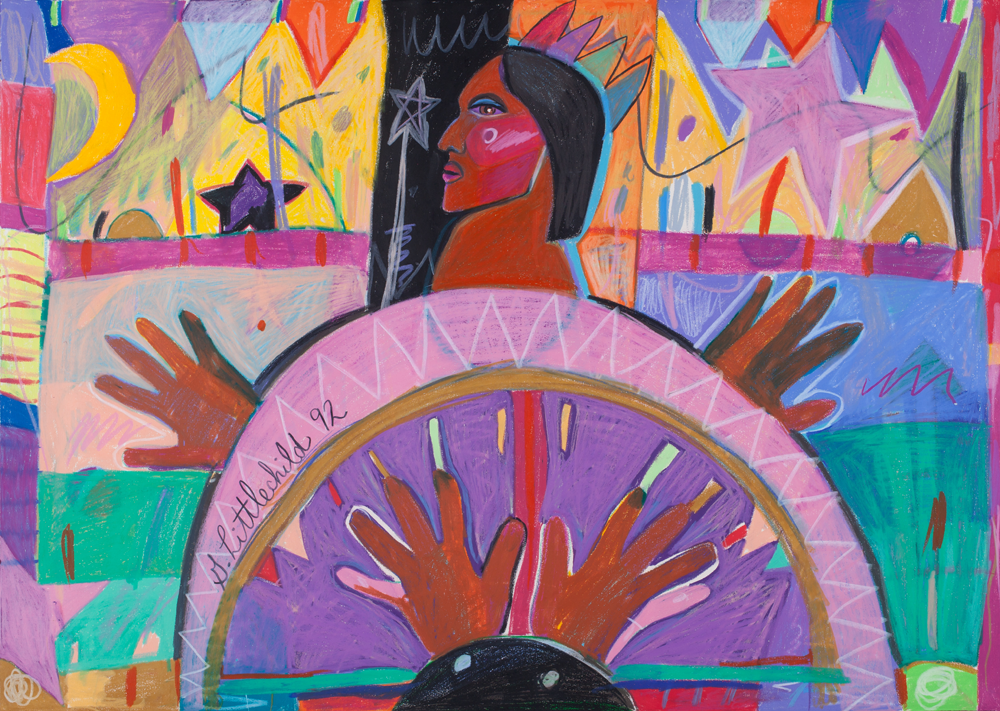 George Littlechild is a renowned Plains Cree contemporary artist, author and educator. As a survivor of the Sixties Scoop—a coercive governmental adoption program that separated thousands of Indigenous children from their families and communities—his practice reclaims family history, cultural identity and ancestral lineage.

Centre of the Universe (1992) is a vibrant self-portrait of the artist painted with aquarelle crayons on paper. Emerging from the centre of the earth, Littlechild is shown against a backdrop of illuminating celestial bodies—among them stars, moons and suns. In this work, he employs powerful imagery; the rising hands from the earth’s core and surface are gestures of reclamation and resiliency, symbolizing Indigenous sovereignty. By uniting his body with the earth, Centre of the Universe references the Cree worldview, particularly the belief in humanity and nature’s harmonious interconnection.

Created during a trip to Santa Fe, New Mexico, the work echoes the region’s rich history of Indigenous resistance, dating back to The Pueblo Revolt of 1680, an uprising by the Puebloans against Spanish invaders. This battle is particularly significant, as it marked the expulsion of European settlers out of what is now New Mexico, the first major reclamation of traditional lands by Indigenous peoples in the Americas. Today, New Mexico is home to 23 Indigenous Pueblos, Tribes and Nations.

George Littlechild earned a BFA from the Nova Scotia College of Art and Design. He has exhibited his work at the Canadian Museum for Human Rights, Winnipeg; the Walter Phillips Gallery, Banff; and the National Museum of the North American Indian, Washington. His work is represented in the collections of the Art Gallery of Nova Scotia, Halifax; the Canadian Museum of History, Gatineau; the Glenbow Museum, Alberta; and the Surrey Art Gallery. The artist lives in Vancouver, where he works as a sessional instructor at Emily Carr University of Art & Design.