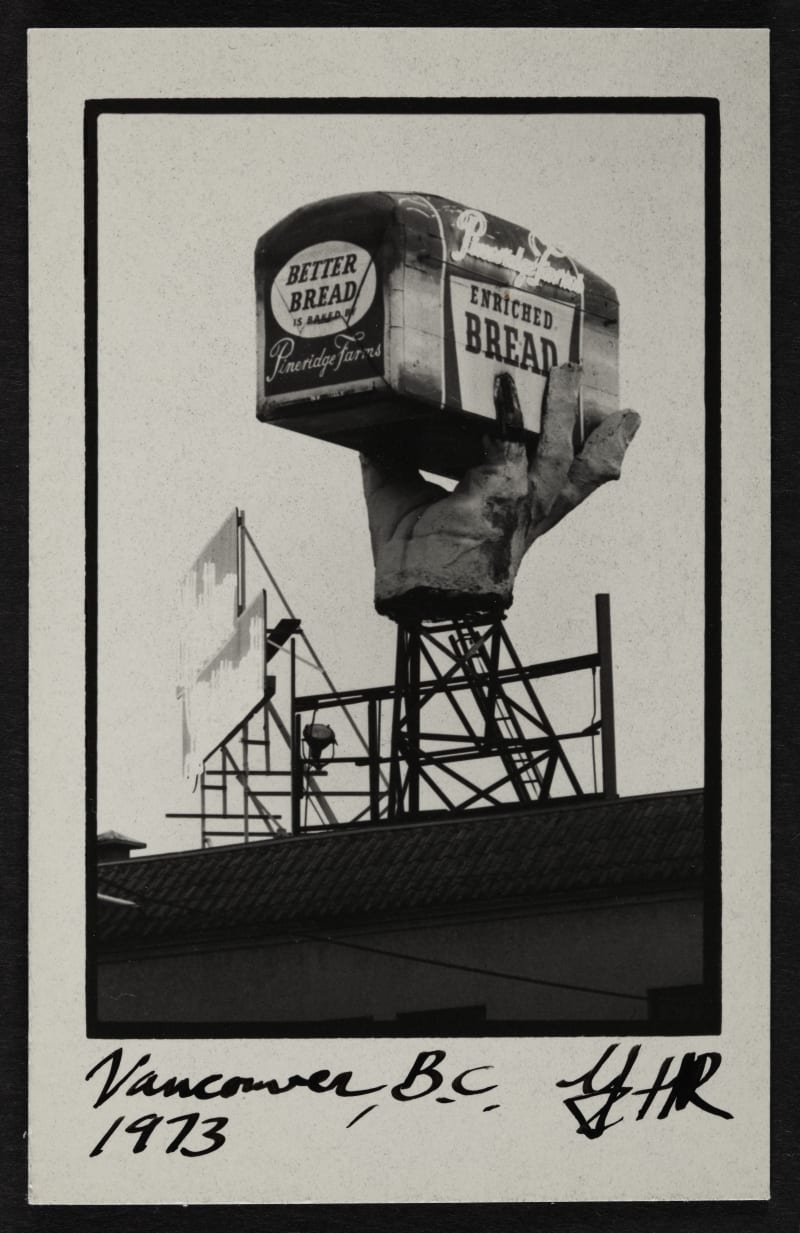 Henri Robideau is a senior Canadian artist whose work explores “the ironic tragedy of human existence.” He is best known for his Pancanadienne Gianthropological Survey, a photographic project documenting the “giants” of the Canadian landscape—in this case, the large apples, birds, boots and nickels that stand as monuments to small-town civic pride in this country.

Hand and Loaf, Vancouver, B.C. documents a sign that once adorned the rooftop of the McGavin Bakery building in downtown Vancouver. Erected in 1947, it slowly deteriorated in situ until 1973 when this photograph was taken. A cuff, once encompassing the wrist, is now missing; the pinky finger is absent here as well. This photograph is taken from 12 Little Giants (1980), a self-published portfolio of twelve gelatin silver photographic postcards, all hand-captioned and initialed by the artist. They are archivally processed on fogged Dupont Varigam paper, which expired February 1956. The photographs were made between the years 1973 and 1978, and contain images taken all over western North America. While their presentation attempts to convey a scatterbrained and pseudoscientific “gianthropological” approach to the project, the formal composition of many of the photographs reveals the eye of a rigorous photographer.

This photograph, and others within this series, are consistent with conceptual photography of the 1970s and 1980s. Like many others working in this period, Robideau’s seemingly casual snapshots were a deliberate affront to the high-modernist prints of previous generations. Presented serially and in an inexpensive portfolio, these postcards recall significant conceptual projects from the same era, including Ed Ruscha’s Twentysix Gasoline Stations and Eleanor Antin’s 100 Boots.

Robideau’s work is held in the collections of the National Gallery of Canada and the Vancouver Art Gallery. Works from the Pancanadienne Gianthropological Survey are in the Robert Frank collection at the Museum of Fine Arts Houston and in the Permanent Collection of the Surrey Art Gallery in Surrey, BC. Robideau continues to show his work, with recent solo exhibitions at the grunt gallery (2015) and the Presentation House Gallery (2012), both in Vancouver. In 2015, Robideau was featured in a solo project, The Henri Robideau Gianthropological Resource Centre, at the MacLaren Art Centre. He lives and works in Vancouver, BC.