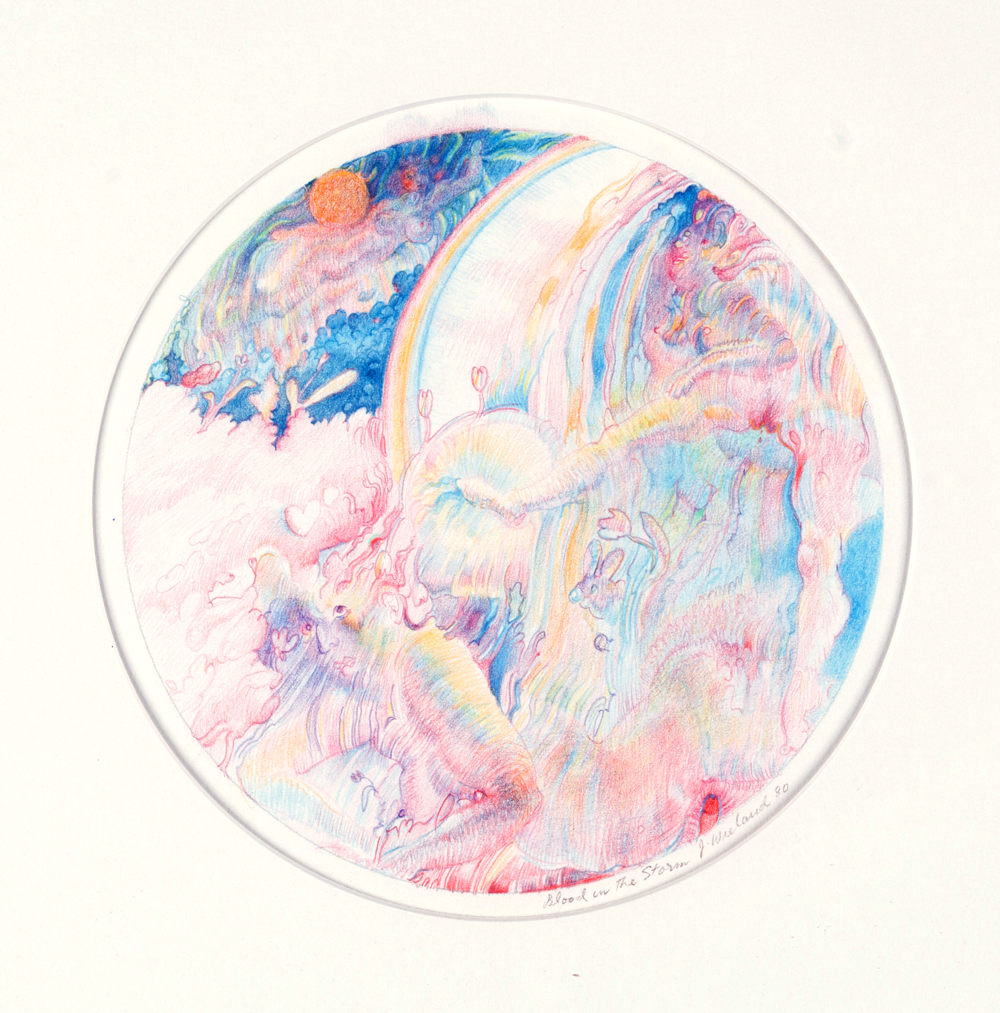 Joyce Wieland (1930-1998) is regarded as a trailblazing Canadian artist and experimental filmmaker. Wieland’s practice came into prominence during the 1960s, a period in North America marked by social upheaval, the anti-war movement, second-wave feminism and identity politics. Her iconic works—among them paintings, drawings, sculptures and textiles—addressed feminism, nationalism and environmentalism. She is lauded for redefining the limits of Canadian modern art, expanding its practices to include elements of craft and pop art.

Blood in the Storm (1980) belongs to a series of sensually charged drawings from Wieland’s mature period, when she explored imagined mythologies, personal histories and female sexuality. Drawn in opalescent colours, the work depicts floating nymphs who reside in an illusory, aqueous realm. In this imaginary landscape, a rose-tinted tidal wave is a life-giving force; buds of flowers emerge from the foam. By treating water—and blood—as points of origin, Weiland imbues this drawing with autobiographical inflections.

Blood in the Storm is a cathartic register referencing traumatic events that shaped Wieland’s life and work. Wieland was born in 1930 in her family home in Toronto during a clamorous storm.[1] The title of the work conveys thunderbolts and torrential rains, forces suggestive of creation and destruction. In its imagery, the pink torrent of water—presumably a mixture of blood and water—signals painful memories from the artist’s childhood. From a young age, she would tend to her mother, stricken by uterine cancer, by cleaning bedpans and replacing sheets.[2]  In this deeply intimate work, blood and water symbolize the climactic forces of life and death.

Joyce Wieland studied under famed painter Doris McCarthy at the Central Technical School in Toronto. Wieland was the first living female artist to receive a solo exhibition at the National Gallery of Canada, Ottawa (1971) and a retrospective at the Art Gallery of Ontario, Toronto (1987). She exhibited her works at the Museum of Modern Art, New York City; the Albright-Knox Art Gallery, Buffalo; and the Centre Pompidou, Paris. Her works are held in the collections of the Philadelphia Museum of Art, the Montreal Museum of Fine Arts, and the Agnes Etherington Art Centre, Kingston. In 1983, Weiland was made an Officer of the Order of Canada.