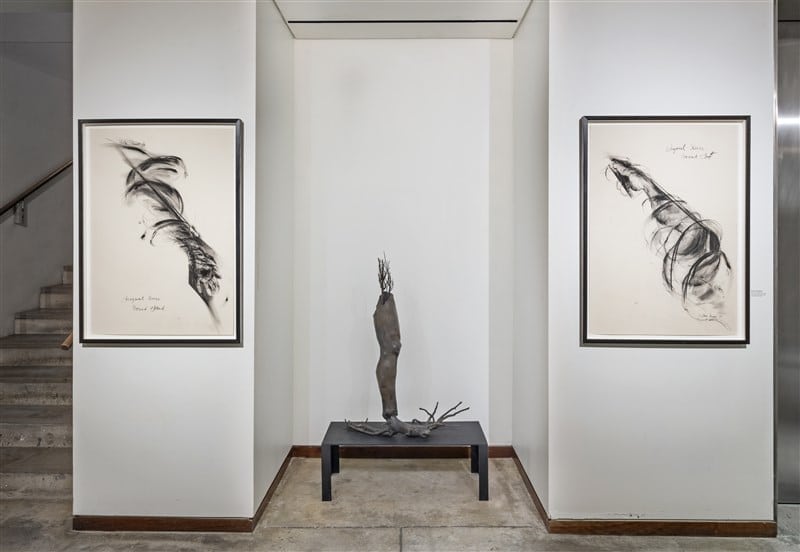 “Culture and the concept of place are in fact inseparable. Culture is what defines place and its meaning to people.” – Lucy Lippard, Mapping the Terrain: New Genre Public Art (1995)

Marlene Hilton-Moore (b. 1944) is an accomplished self-taught artist best known for her public art works. Her illustrious career spans over four decades and includes works in the media of drawing, photography, sculpture and site specific installations. Drawing influences from in her upbringing in the Maritimes, Hilton-Moore’s works are anchored in the themes of family, nature and individuality. Often engaged with the human form, her works are influenced by the surrounding environment and seek to reveal our spiritual presence in the physical world.

Drawn from the MacLaren Art Centre’s permanent collection, Leg with Root and Branch is a sculptural composite of a truncated human-like leg with a profusion of twigs sprouting from the top and a cluster of robust roots at the base. Comprised of industrial and natural elements, Leg with Root and Branch is a totemic sculpture fashioned from contradictory sources. The work takes on a symbolic dimension, reminding us of the dualisms that constitute our human condition.

It was the processes of construction along Highway 400, a strip of four lane highway north of Barrie, which served as the inspiration for Leg with Root and Branch. For Hilton-Moore, the cutting of trees, uprooting of posts and the replacement of fencing positioned people in a confrontation with nature. The inherent strife between humans and nature is reconciled through Hilton-Moore’s reparative synthesis of contradictory elements; the leg takes root through the dense medium of bronze, creating a grounded, rhizomatic connection to the landscape. These seemingly incongruous influences create an iconography that is as much local as it is universal.

Her prestigious public art commissions can be found across North America, among them After Babel – A Civic Square a collaboration with John McEwen, Montreal; The Valliant’s Memorial also with McEwen, Ottawa; Pierre le Moyne d’Iberville, Ocean Springs; Wiidookdaadiwin, Barrie, and most recently, The Volunteers, Halifax. In addition, the MacLaren presented Hilton-Moore’s site specific installation Site/Breast in 1993 at our former location on Toronto Street. Leg with Root and Branch is on long-term display at the MacLaren, on view opposite the John Lehman Gallery.

Hilton-Moore’s work is held in numerous permanent collections, including the Agnes Etherington Art Centre, Kingston; the Robert McLaughlin Gallery, Oshawa; the University of Winnipeg, Manitoba; the Art Gallery of Algoma, Sault Ste. Marie; and the Canada Council Art Bank, Ottawa. In addition to her artistic practice, Hilton-Moore has served as a visual arts instructor at Georgian College, Barrie. In 2014, she received the City of Barrie’s Excellence in Arts Award.

She lives and works in Hillsdale, Ontario.