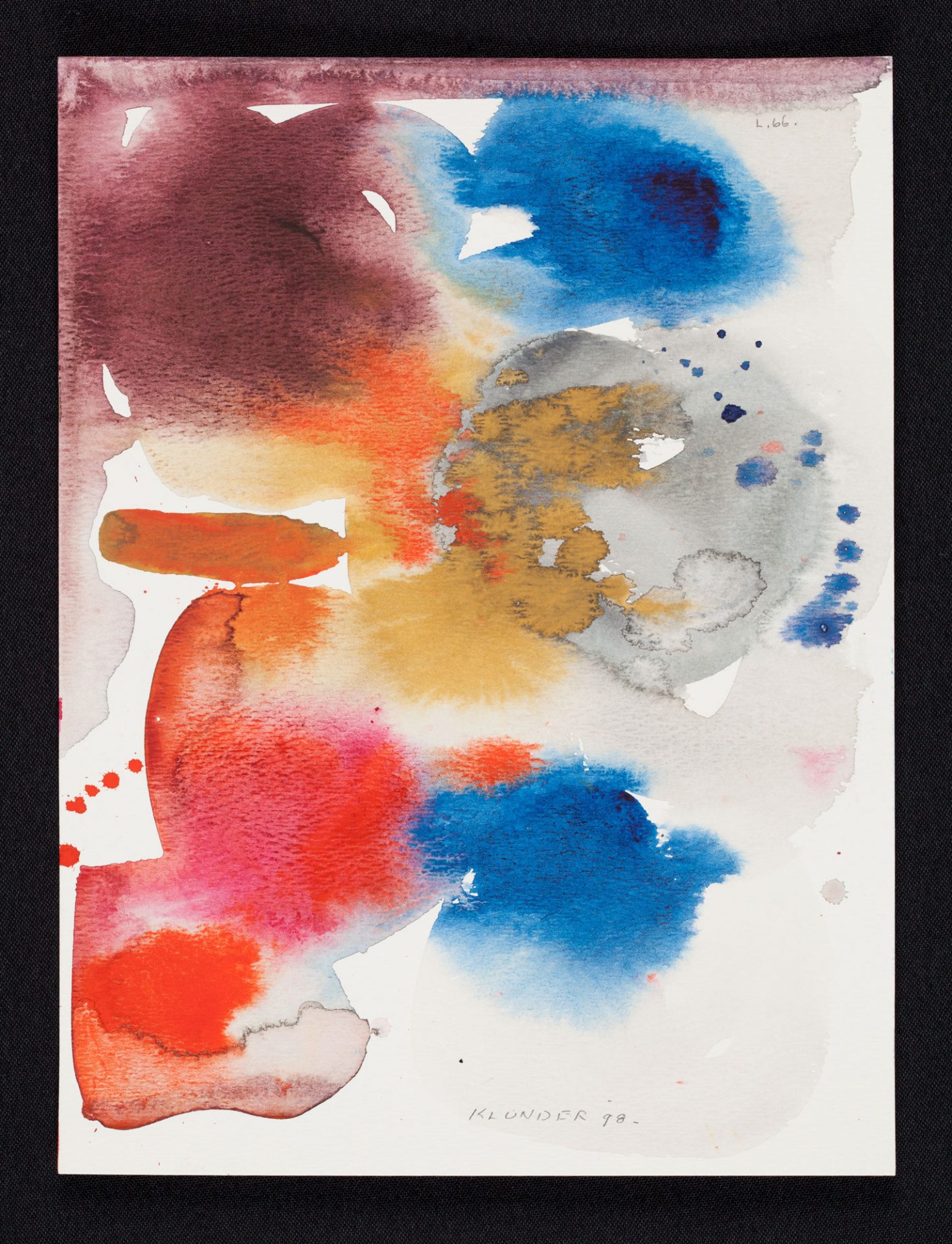 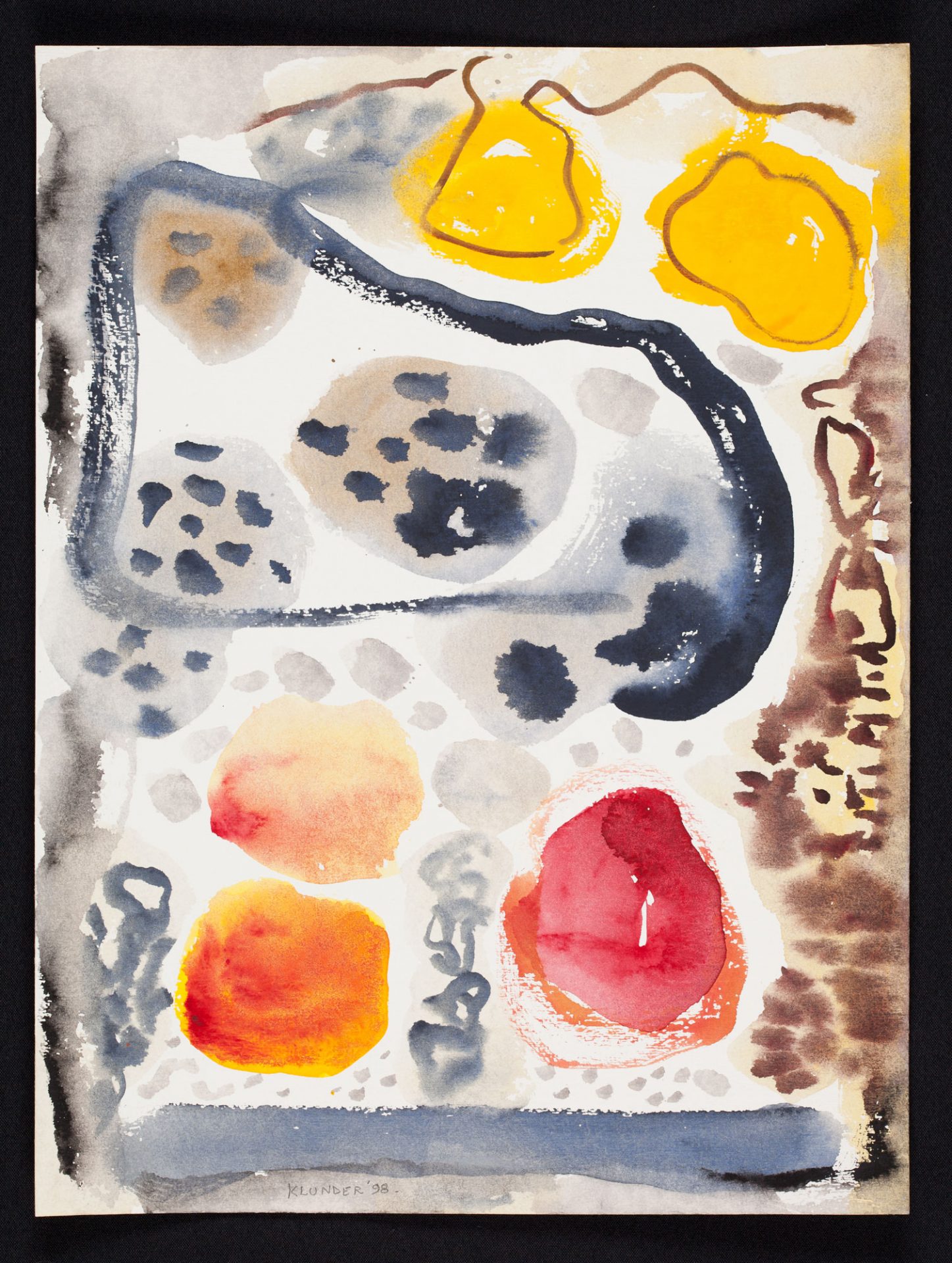 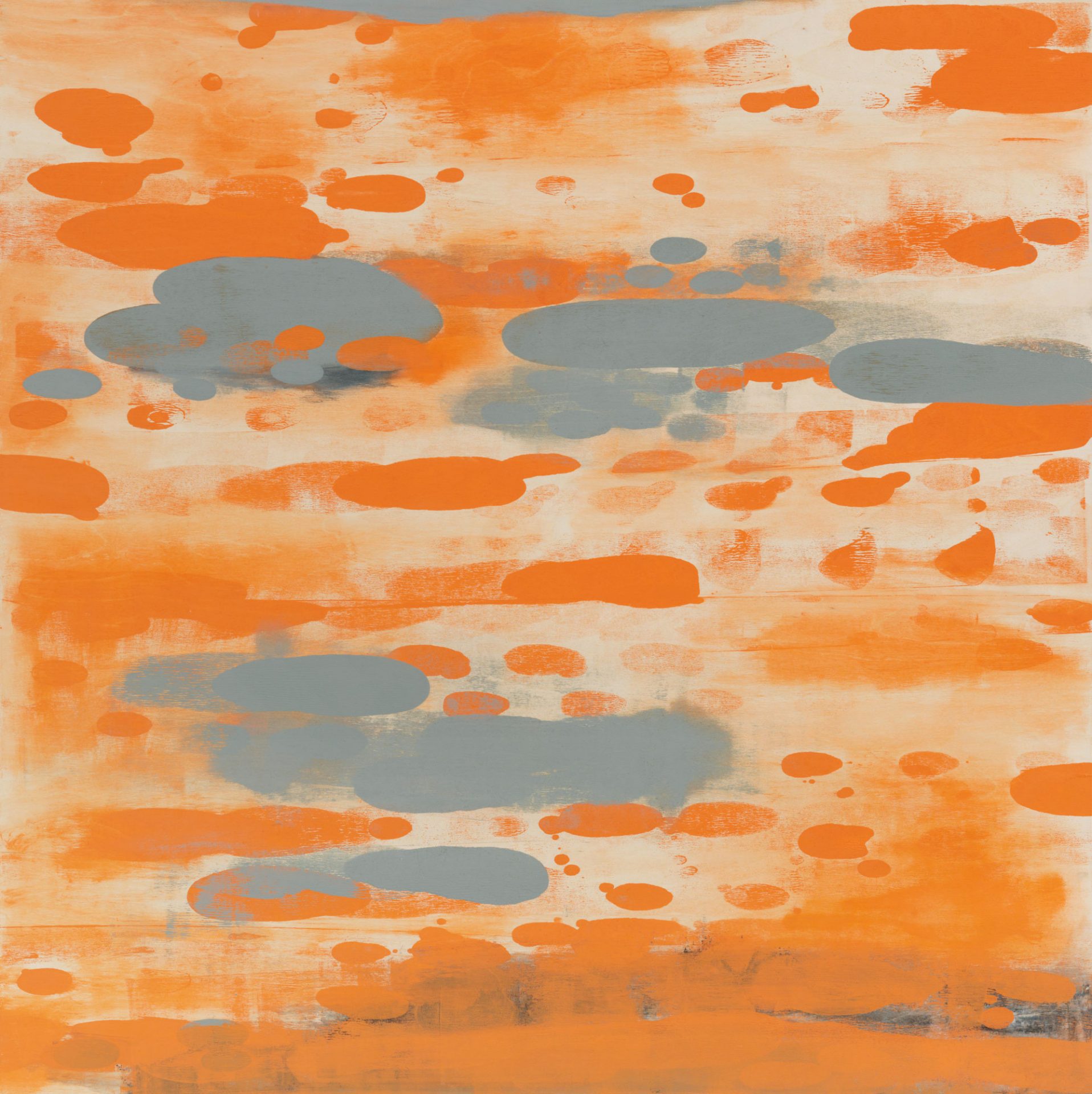 Frances Thomas
August Heat, 2009
Acrylic on wood panel
Collection of the MacLaren Art Centre, 2010
Purchased with the support of the Canada Council for the Arts Acquisition Assistance program and a bequest from John Reesor

Heat shimmers, or masses of intensely heated air, can be found above tarmac highways, barbeques and sizzling tiled rooftops. These playful tricks of light reflect parts of the world and invent others, abstracting their surroundings. heat rising is an exhibition of paintings drawn from the MacLaren’s Permanent Collection, all of which invoke that familiar warm allure through colour, intuitive mark-making and play with abstraction.

Senior Canadian artist Harold Klunder has maintained a substantial painting practice since the early 1970’s. Part of his oeuvre is a growing body of watercolours, made with spontaneous and instinctive gestures. In the fall of 1997 and spring of 1998, he created a suite of watercolours while teaching at the University of Lethbridge, Alberta. These works on handmade paper are suffuse with rich pigments, recalling the palette of Marc Chagall and line quality of Joan Miró. Lethbridge #6 contains soft pools and opposing harder lines jumping up from the bottom of the paper. Some shapes splutter like eggs on a summer sidewalk, surrounded by a steamy brown-grey border. Lethbridge #66 is more diffuse; Carmine red and cyan melt into the paper with blurry energy. In both paintings the contrasting forms and colours encourage all-over looking. This tactic, which Klunder is known to employ repeatedly, urges viewers to resolve the abstractions in personal ways.

Like Klunder’s watercolours, Frances Thomas’ August Heat was created through a back-and-forth process of intuitive mark-making and responding to the surface of the artwork. A dab of paint here balanced by a gesture there, and so on. Letting instinct drive, Thomas laid down fluid acrylics and rolled the pigments across the panel with a brayer, a tool commonly used in printmaking. Sharp greys punctuate the horizonal artwork and temper the orange haze. The result is an image which seems to imply that more lives beyond the edges of the panel, within a deep and humid landscape.

Harold Klunder was born in the Netherlands in 1943 and emigrated to Canada with his family in 1952, where he later attended Toronto’s Central Technical School, studying under artists Doris McCarthy, Charles Goldhamer and Virginia Luz. Klunder has exhibited regularly for more than four decades, and his work is held in significant private and public collections nationwide, including the National Gallery of Canada, the Art Gallery of Ontario, and the Musee d’art contemporain de Montréal. Klunder lives and works in Montréal, Quebec; he also maintains studios in Flesherton, Ontario, Pouch Cove, Newfoundland and Berlin, Germany.

Frances Thomas is a Barrie-based painter and printmaker. She received both her BFA and MFA from York University, Toronto, Ontario, and is the recipient of the Samuel Sarick Purchase Award for excellence in thesis work. She has participated in residencies in Pouch Cove, Newfoundland and Triangle Arts in Brooklyn, New York and in 2016 spent three months in Berlin on a self-directed residency. Her paintings were featured in a solo exhibition, but wait, with an accompanying catalogue, at the MacLaren Art Centre in Barrie. Thomas currently lives and works from her loft and studio space in Barrie. She has exhibited in Barrie, Montreal, Edmonton, Toronto and New York and her work is in the permanent collections of the MacLaren Art Centre, Bank of Montreal and York University