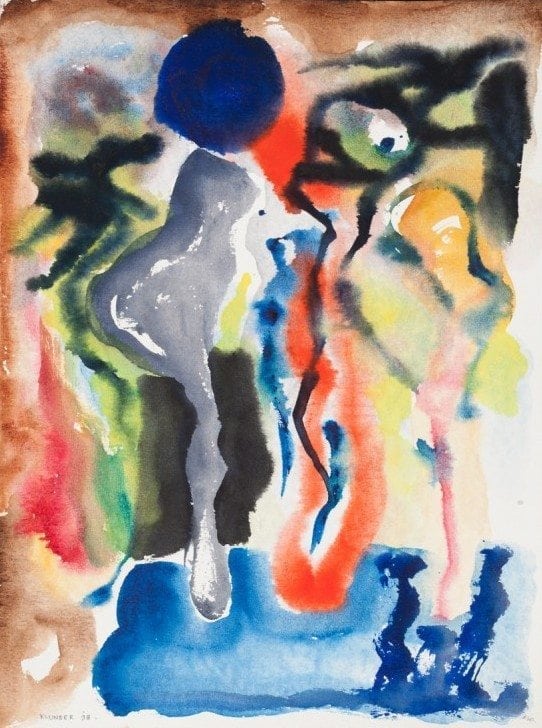 Harold Klunder is one of Canada’s leading abstract painters and has been exhibiting regularly for over three decades. Cache features sixteen watercolours from the MacLaren Art Centre’s Permanent Collection, drawn from a large body of work that Klunder created while teaching at the University of Lethbridge in the fall of 1997 and spring of 1998. These abstract works invite the eye to search out hidden shapes and symbols among the bleeding stripes, staccato dashes and watery pools of each composition. That these works may be viewed as intimate hiding places inspired the title of this exhibition.

Klunder views the immediacy of watercolour as respite from the weighty and protracted movement of oil painting, his primary medium. The spectrum of colour and range of handling in these works are joyous, as if the buoyancy of watercolour had been an ecstatic discovery every time the paintbrush met the page. The inherent diffusion of watercolour gives a metamorphic quality to the shapes that emerge from Klunder’s abstract arrangements: celestial bodies exchange places with traffic lights, and tornadoes with targets; megaliths transmute into huddled figures, and cells appear to divide among the drips and puddles left by a leaky pen. Paradoxically, the state of flux inherent to the composition of the Lethbridge watercolours is at odds with the reality of their creation: according to Klunder, it is the permanence of mark-making in watercolour that draws him to the medium.

Harold Klunder was born in Deventer, The Netherlands in 1943. After immigrating with his family to Canada in 1952, he attended Central Technical School in Toronto where he studied under painter Doris McCarthy. His first solo show was held at Sable-Castelli Gallery, Toronto, in 1975. His work is held in important private and public collections nationwide, including the National Gallery of Canada, the Art Gallery of Ontario, and the Musée d’art contemporain de Montréal. Klunder lives and works in Montréal, Quebec; he also maintains studios in Flesherton, Ontario, Pouch Cove, Newfoundland and Berlin, Germany.