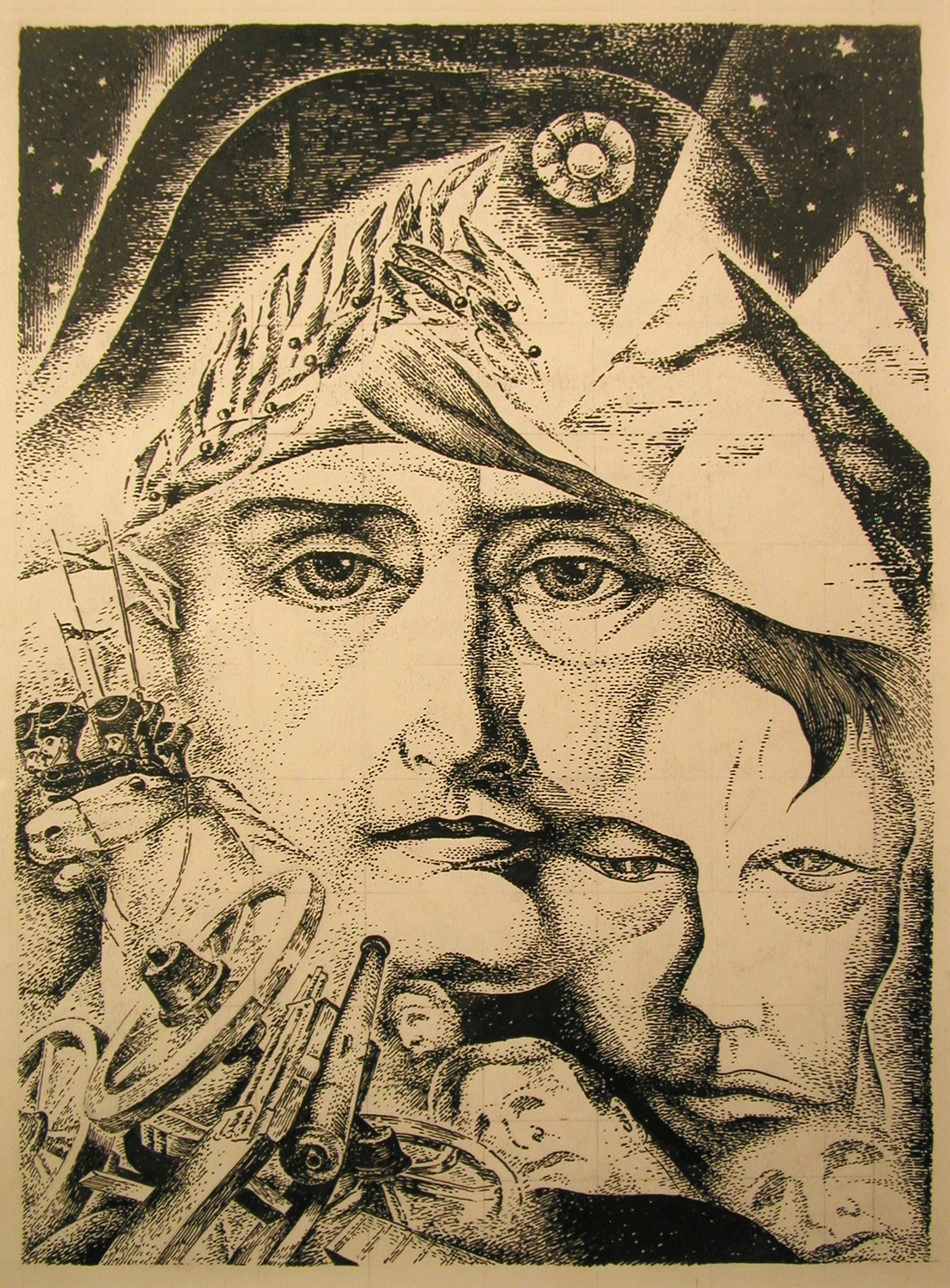 The breadth of this subject matter encompasses a tremendous arc that joins seemingly disparate disciplines and artistic influences. Brooker’s illustrations of canonical literature embody his syncretic approach to art-making and converges his profound interests in art and literature.

Brooker’s Crime and Punishment Series (c. 1933) illustrates thrilling scenes from Fyodor Dostoevsky’s novel Crime and Punishment (1866). This tale of moral depravity and redemption is centered on Rodion Raskolnikov, a destitute law student who murdered a deceitful pawnbroker and her stepsister. Raskolnikov’s admiration for Napoleon influences him to believe that he is above the reach of the law. This feverish delusion is rendered in Napoleon (Crime and Punishment Series) (c. 1933), where Brooker uses a meticulous stippling technique to merge ghastly portraits of Napoleon and Raskolnikov into one nightmarish entity that overlooks the decimation of the Egyptian army by Napoleon’s army during the Battle of the Pyramids. The dramatic enlargement of the Napoleon’s face demonstrates Brooker’s ability to translate literary prose into psychologically-charged imagery influenced by the conventions of silent cinema.[i]

Bertram Brooker was born in Croydon, England in 1888 and emigrated to Canada in 1905, settling first in Portage la Prairie, Manitoba. In 1920, Brooker permanently settled in Toronto. His works held in the collections of the National Gallery of Canada, Ottawa; the Art Gallery of Ontario, Toronto; and the McMichael Canadian Art Collection, Kleinburg. The MacLaren Art Centre holds the largest collection of drawings by Brooker. Brooker received the first Governor General’s Award in fiction for his novel Think of the Earth in 1936 and a Silver Award from the Association of Canadian Advertisers in 1951. The artist passed away in Toronto in 1955.

Brooker’s drawings are the focus of the exhibition This Tremendous Arc, on view at the MacLaren Art Centre through February 23, 2020