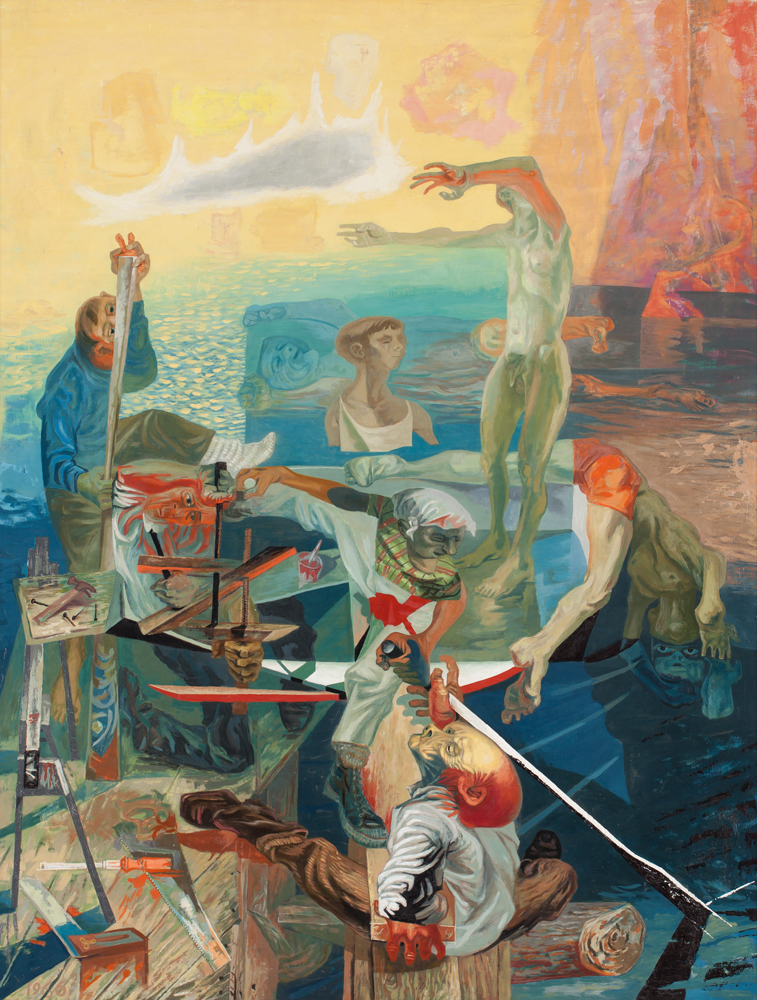 Frederick Hagan was a senior Toronto-based artist and educator. Hagan’s practice engaged in the themes of Canadian history, geography and culture. Reflecting on summers spent in Northern Ontario, a region of lakes and rocky hills that inspired his career, Hagan notes: “The course of my drawing, painting, and printmaking has been greatly affected by the environment of the North—knowing the rock, having friends there, travelling the waters hiking the hills.”[1] Skeleton Shore Timbers memorializes the Hagan family’s roots in Muskoka by depicting generations of men—among them his father and grandfather—working on a dock along the shores of Skeleton Lake. Immersed in the landscape, the men’s elongated bodies overlap; this layering insinuates the shared histories, memories and experiences of the Hagan family in the region.

Hagan studied art at the Ontario College of Art & Design under the tutelage of Franklin Carmichael, a Group of Seven painter, and portraitist John Alfsen. He exhibited his work at the Art Gallery of Ontario, Toronto; the Robert McLaughlin Gallery, Oshawa; and the Peel Art Gallery, Museum and Archives, Brampton. In Barrie, Hagan was featured in numerous solo exhibitions, among them Exploration: Landmarks, Adventures and Realizations and Before Exploration co-organized by the MacLaren Art Centre and Georgian College in 1990. His work is represented in the collections of the National Gallery of Canada, Ottawa; the Glenbow Museum, Calgary; and the Varley Art Gallery of Markham. From 1946 to 1983, Hagan taught at OCAD, where he is attributed as founding the printmaking department. During his tenure, he taught and inspired the next generation of Canada’s leading artists, whose works are found in the MacLaren’s collection, and include Walter Bachinski, Ted Fullerton, J.C. Heywood, Thomas La Pierre and Michael Snow. The artist was born in 1918 in Toronto and passed away in 2003 in Newmarket.