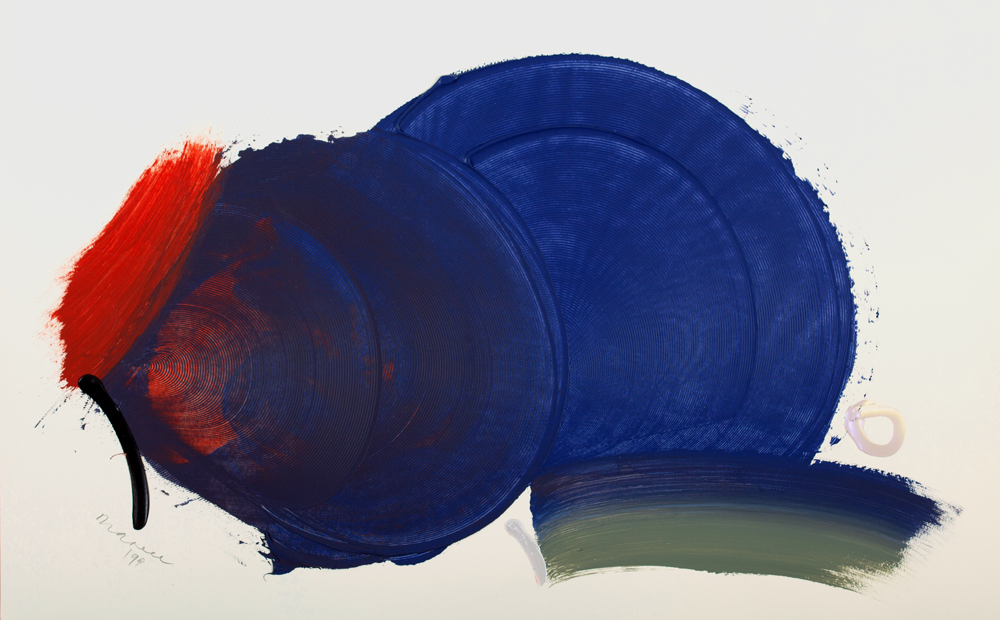 Joseph Drapell is a major Czech-Canadian abstract painter. He is a member of the New New Painters, a group of 11 American and Canadian artists established in the 1980s who disavowed the flat and thin application of paint pioneered in the 1950s by the Colour Field painters. A defining characteristic of the New New Painters was their use of intensely coloured acrylic gel; its thick consistency energized the surface of the canvas with a sculptural relief.

In the 1970s, Drapell established an international reputation for his energetic sweeps of paint made with an aluminum raking tool on large-scale canvases. His lustrous use of paint imbued his works with bejeweled, iridescent textures. In this untitled drawing (1999) two blue conjoined circles fan out; the first exposes layers of red paint, while the second transitions to green. Accents mark the end of each circle: an oil black streak and a shimmering, pearlescent circle. Painted with a raking tool, Drapell created concentric rings that ripple, suggestive of rhythm and natural growth. Drapell’s textured paintings share an affinity with the landscape, echoing the waves around his summer home in Georgian Bay and the rolling terrains of his birthplace, Humpolec, Czechoslovakia.

Joseph Drapell was born in 1940 in Czechoslovakia and emigrated to Canada in 1966. He studied painting and sculpture at the Cranbrook Academy of Art, Michigan. Drapell has exhibited his works at the Windsor Art Gallery; the Art Gallery of Nova Scotia, Halifax; and the Museum of Modern Art, Vienna. His work is represented in the collections of the Solomon R. Guggenheim Museum, New York; the Museum of Fine Arts, Boston; and the British Museum, London, England. The artist lives and works in Toronto.