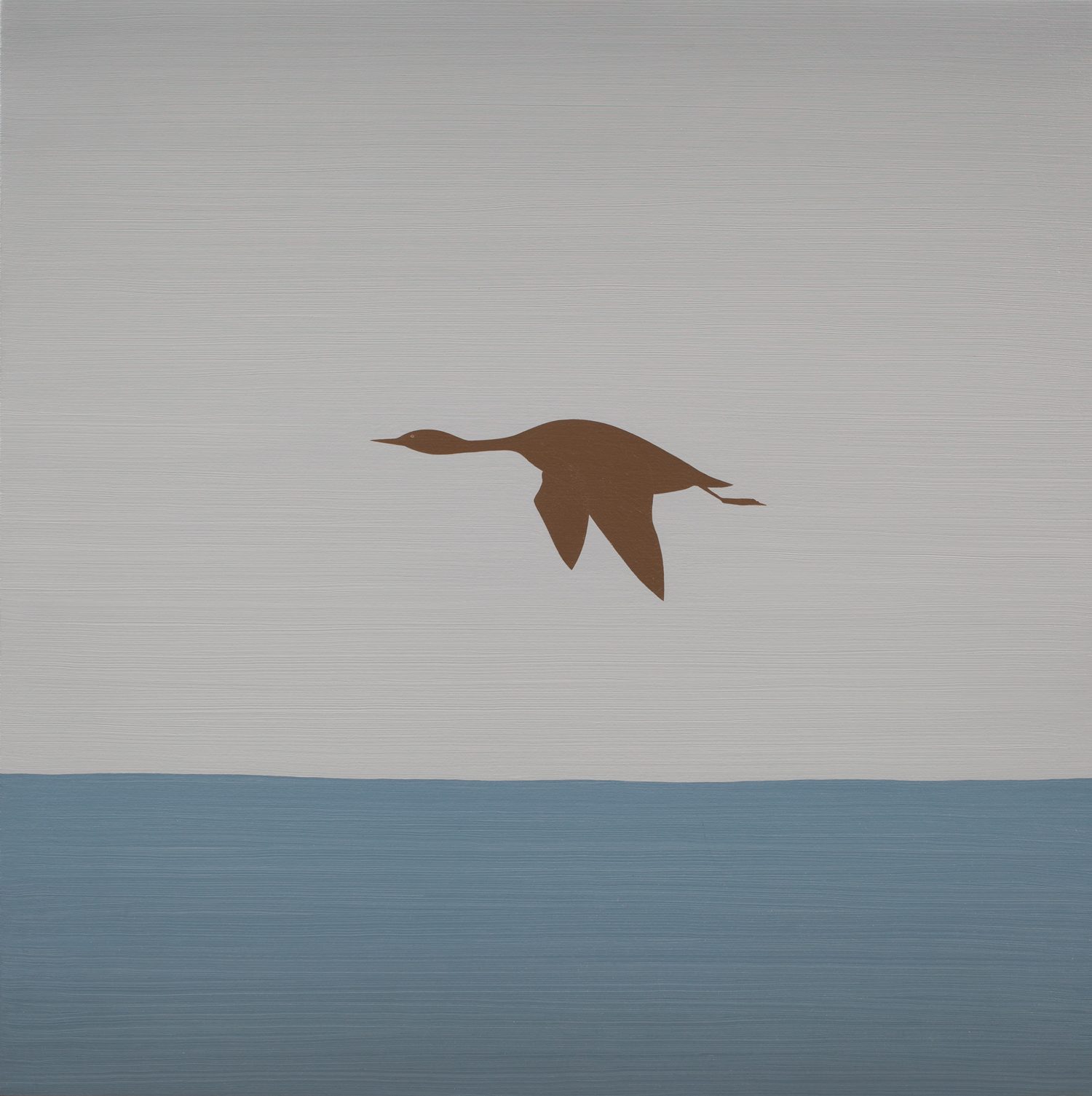 Tim Zuck (Canadian, b. United States, 1947)
Flying Loon (#130), 1981
oil on canvas
61 x 61 cm
Collection of the MacLaren Art Centre. Gift of Ms. Barbara Stringer, 1997
Tim Zuck was born in Erie, Pennsylvania in 1947. He attended Wilmington College in the late 1960s, studying philosophy and psychology; it wasn’t until after a year-long mission to India with his parents that his focus shifted to fine arts, and he enrolled at NSCAD afterwards, graduating in 1971. He attained his MFA at Cal Arts in Valencia, California in 1972, returning to NSCAD to teach later that year. In 1975, he moved from a conceptual, process-oriented practice to painting. In 1979, Zuck resigned and took up painting full-time, working at Purcell’s Cove in Nova Scotia.
Flying Loon (#130) was made during this period in Nova Scotia. Typical of his works during this period, the apparently simple composition is hard-fought, the pared-down elements a careful negotiation between abstraction’s purification of form and Zuck’s realist practice. Flying Loon (#130) evokes the changing of seasons and the passage of time, but there is an edge to it, too: the bird’s back is curved against the weight and work of flight, rather than shown with wings raised as it is conventionally depicted. Apparently deadpan, the work’s serialized title—Flying Loon (#130)—hints at Zuck’s laborious effort in achieving such a balanced composition as much as the process-oriented conceptual practice that characterized Zuck’s early years as an artist. This work was most recently exhibited at the MacLaren in 2012’s Slow Sight: Itee Pootoogook and Tim Zuck.
Tim Zuck has been the subject of numerous solo exhibitions, including the touring shows Tim Zuck: Learning to Talk (2002-3) and Tim Zuck: Still Life in Landscape (1997-8). His works have been exhibited at the National Gallery of Canada, Ottawa; the Art Gallery of Ontario, Toronto; Justina M. Barnicke Gallery, Toronto; Art Gallery of Nova Scotia, Halifax; Walter Phillips Gallery, Banff; and others. His work is held in numerous public collections, including the National Gallery of Canada, the Art Gallery of Ontario, the Art Gallery of Hamilton, the MacLaren Art Centre and many others. He currently resides in Barrie, Ontario.