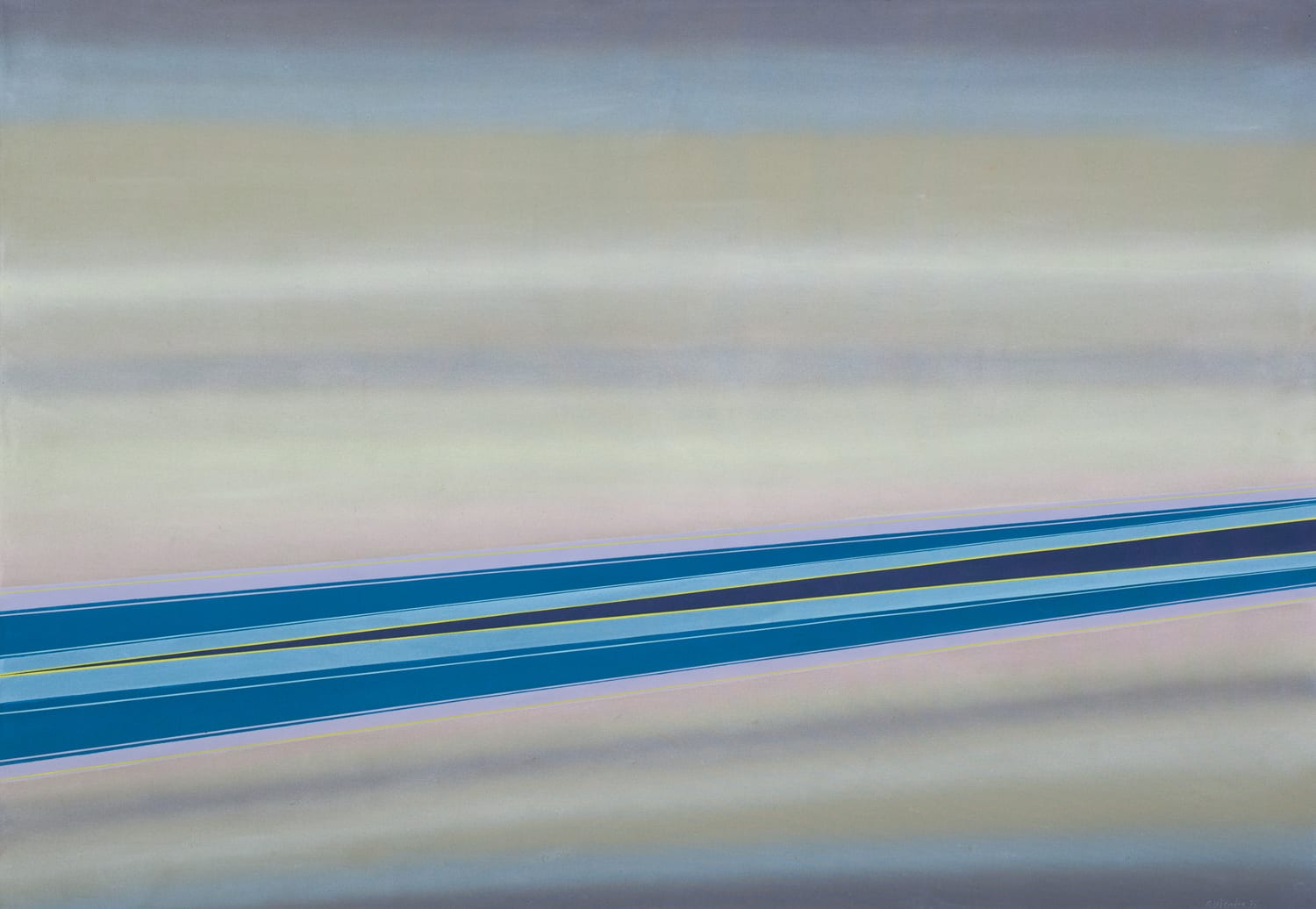 Rita Letendre is a distinguished Canadian painter and printmaker known for her independent spirit and intensely personal artistic vision. Letendre’s painting style evolved continuously throughout her long career, but dominant themes of light, energy and a strong focus on expressiveness have always been palpable. Her signature use of intense colours activates her paintings in space, taking them beyond the two-dimensionality of the canvas and offering a participatory experience for viewers.

In Letendre’s Morning Glow, a set of diagonal rays of lavender, cobalt, sky blue and lemon yellow stretch across the bottom half of the canvas, divided by a jutting spike of indigo. In a powerful motion, the lines emanate across the canvas, implying their continuation beyond it.  The energetic movement of this work, as well as a preference for softer, more blended background, are typical of Letendre’s work from the 1970s.

Just as the lines in Morning Glow stretch beyond the confines of the canvas, Letendre’s practice as a whole steps outside of art historical categories that attempt to define it. As Letendre remarked in 1990, “My painting is non-figurative, abstract, maybe it’s lyrical. All the terminology is not important. What is important is the actual painting. When you’re looking at the painting you’re looking at something real, and that’s what counts.”

Rita Letendre was born in 1928 in Drummondville, Quebec. She is an artist of mixed-heritage, which includes Abenaki First Nations on her mother’s side. After beginning her studies at the École des Beaux-Arts in Montreal, Letendre left, disappointed with the school’s conversativism and academic rigidity. She subsequently formed ties with Paul Émile Bourduas and the Automatistes—a group of radical Montreal artists concerned with the liberation of creative force as a deliberate reaction against the École’s emphasis on traditional representation and figurative art. Inspired by the Automatistes, Letendre began to explore her own artistic vision in the style of abstract expressionism and lyrical abstraction. Over the course of her illustrious career, Letendre has completed numerous public murals and an immense stained-glass work in Toronto’s Glencairn Station. In 2010, she was awarded the prestigious Governor General’s Award in Visual Arts. Her work appears in the collections of the Art Gallery of Ontario, the National Gallery of Canada, the Montreal Museum of Fine Arts, the Vancouver Art Gallery and the MacLaren Art Centre, among others.