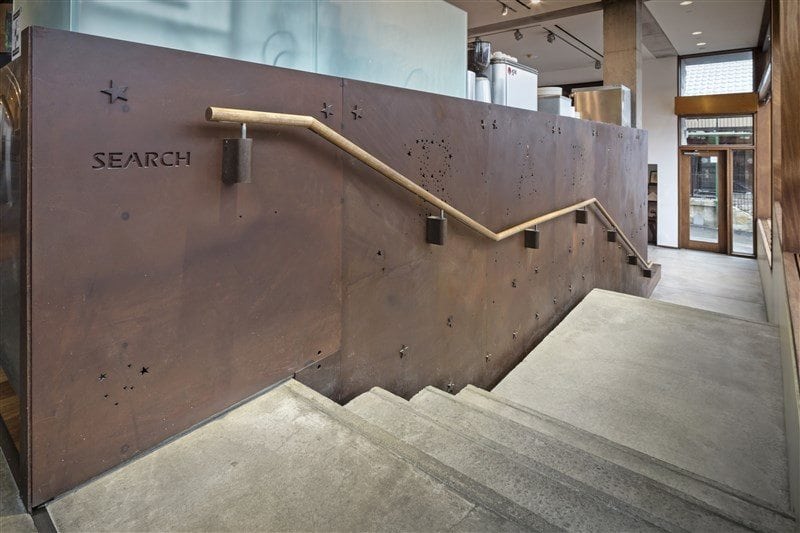 Every day we casually or carefully move our stuff and business around the material world of daily life. A galaxy, a backdrop of ‘stars’ speaks both of our place in the universe and the very human condition. Search Radio implies several radios set against that backdrop—the radio waves used in celestial exploration and the very imaginary but non-visual life of the radio-listening audience…

John McEwen’s Search Radio speaks to the endless fascination that the universe holds. Installed in situ, this wall of flame-cut corten steel is integral to the fabric of the MacLaren’s brick-and-mortar building, animating the stairwell between the lower Mulcaster Landing and the Gallery Café. A scattering of McEwen’s signature stars, concentrating in the lower right corner, leads into and out of the MacLaren’s board room. Visible from the street, this massive steel structure shimmers when the interior lighting shines through the perforate stars. Animated by motion, the stars “twinkle” when viewers ascend or descend the interior staircase, or the incline directly outside.

McEwen’s works are often informed by poetic and art historical sources as well the rich history of the Canadian landscape. He is best known for his use of stars as sculptural elements as well as naturalistic images, flame cut from massive metal slabs. One of his best known public works utilizing this motif is Searchlight, Starlight, Spotlight (1999) a set of three massive conical steel tubes perforated with 1000 stars, which was commissioned by Maple Leafs Sports and is installed outside the Air Canada Centre in Toronto.

John McEwen is an artist of great and long stature residing in Simcoe County, and considered by many to be one of Canada’s eminent sculptors. Born in Toronto in 1945, he co-founded and was the former director of A Space in Toronto, one of Canada’s first artist-run centres. He purchased his blacksmith’s studio in Hillsdale, Ontario in 1972, where he continues to work and live. In 2007 he was honored with a Doctorate of Fine Arts from The University of Lethbridge, Alberta. His monumental steel sculptures appear in public spaces across Canada and internationally, and his smaller works are exhibited in galleries regularly and collected by major institutions including the National Gallery of Canada and the McMichael Canadian Art Collection.