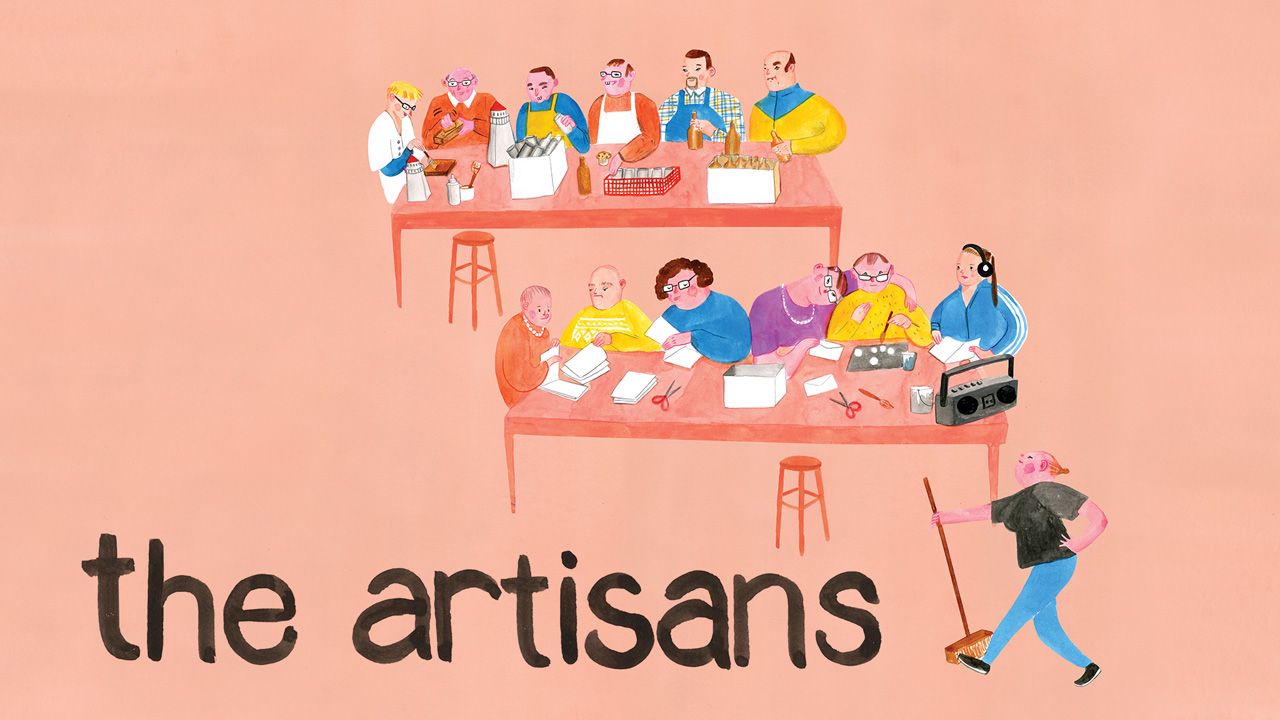 On Wednesday, May 13, the MuseumWeek theme is #togetherMW – a tribute to collectivity, community and joint efforts. While we can’t gather with all our friends as we normally would, we can still gather with those in our households and online via Zoom or Skype to watch these free movies together, which focus on community and art making. Curated from the National Film Board online, this selection of videos are sure to warm hearts and remind us that we are all part of a community!

1. The Artisans (French, subtitled). 51 minutes. By Daniel Leger.
“We’re beautiful, the whole gang. We’re special,” says Jean of the 15-odd employees at The Artisan—a workshop employing people with intellectual disabilities. Jean is the self-described “handyman and best-looking” member of the group. A moving celebration of difference, The Artisans captures daily life at an organization where the workers are as courageous as they are colourful.

2. Roses Sing on New Snow. 7 mins. By Yuan Zhang.
In this animated short, Maylin cooks mouth-watering meals at her father’s restaurant in Chinatown, but her father and brothers take all the credit. When a dignitary from China visits and tastes one her dishes, Maylin finally earns recognition. This film is part of the Talespinners collection, which uses vibrant animation to bring popular children’s stories from a wide range of cultural communities to the screen.

3. The Portrait. 41 minutes. By Hubert Davis.
If you have taken a peek at our online exhibition Portraits From the MacLaren’s Permanent Collection, you might recognize the artist featured in this documentary. It’s the opportunity of a lifetime for artist Phil Richards, who’s been commissioned to create Canada’s official portrait of Her Majesty Queen Elizabeth II for her Diamond Jubilee. Academy Award-nominated filmmaker Hubert Davis follows Richards over months of painstaking preparations, as he works to capture Her Majesty’s likeness and spirit on canvas.

4. I Can Make Art Like…Emily Carr. 10 minutes. Jane Churchill.
This short film is part of a series entitled I Can Make Art and focuses on the work of Emily Carr. In this film, children examine Carr’s unusual world and the inspiration for her haunting landscapes. Drawing on this inspiration, they create a giant forest mural on a window in their school. The series is comprised of six short films that take a kid’s-eye view of a diverse group of Canadian visual artists, including Maud Lewis, Andrew Qappik, Kai Chan and more.

MuseumWeek is the worldwide festival for cultural institutions on social media. This year’s theme “togetherness” will show support for confined populations and for those working to fight against COVID-19. It will also highlight the power of culture, art and the institutions that support them, and their unique ability to bring people together.

MuseumWeek 2020 takes place from May 11 to 17, bringing together cultural institutions from all over the world based on the idea of “7 days, 7 themes, 7 hashtags”.