The MacLaren’s permanent collection contains over 4,000 artworks, many of which rarely see the light of day and some have never been on display! Do you ever wonder what artwork is living deep within the dark, quiet vaults of the MacLaren?

Anchor Point, a yearlong series of collection-focused exhibitions will bring the collection into the light. In collaboration with the public, we will mount a series of exhibitions based on what you want to see on the walls of the gallery. This series will reflect your interests; highlight hidden gems; identify the strengths and the gaps in the collection; and foster conversations on how the collection and exhibitions can more closely reflect the stories of the community we serve.

Below you can find a series of works from the MacLaren permanent collection being considered for Anchor Point. 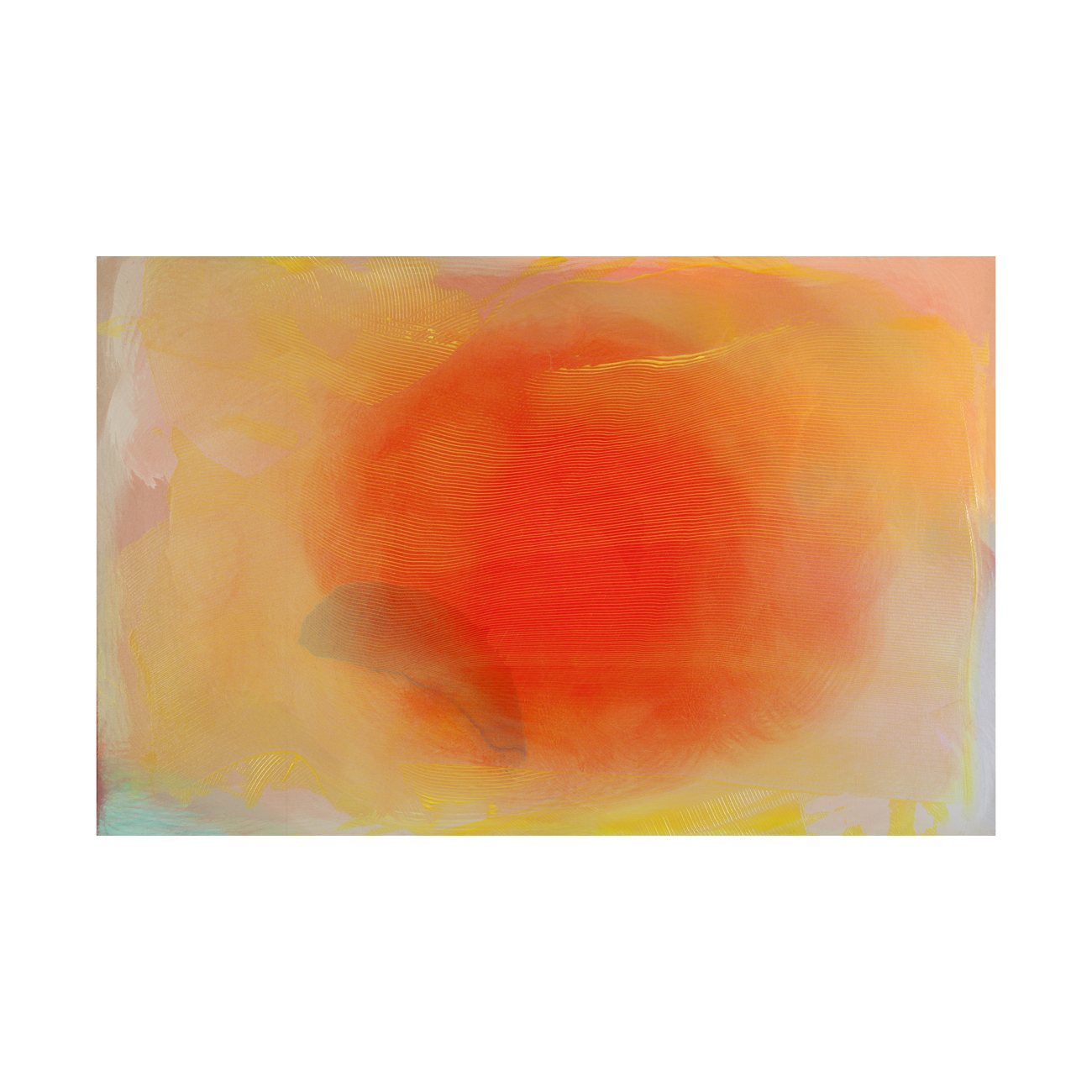 Many of Canada’s sunniest places are in Manitoba, which has been ranked as having Canada’s clearest skies. Le Manitoba can remind viewers of that clear sky, and a blistering haze of heat with a burning sun at its centre. Cloudy wisps of pink and gray flood the canvas, except at its edges. At the bottom left, a single corner of bleached teal is the open sky’s last stronghold. Getting in for a closer look at the painting, what appears to be a flat surface on first glance reveals yellow paint that has been raked across the canvas, leaving little trenches. Le Manitoba was exhibited in Found In Translation: Highlights from the Permanent Collection, at the MacLaren Art Centre in fall 2012.

Joseph Drapell was born in 1940 in Humpolec, Czech Republic.  In 1966, he left Europe, travelled Canada, and then studied at the Cranbrook Academy of Art in Bloomfield Hills, Michigan. There he met visiting Canadian artist Jack Bush, a pioneering colour field painter. Drapell was also deeply influenced by the work of Morris Louis, one of the earliest exponents of colour field painting. He developed a technique of applying acrylic paint with a broad spreading device attached to a movable support. In early 1970, Drapell settled permanently in Toronto, where he currently lives, works and maintains a private museum. 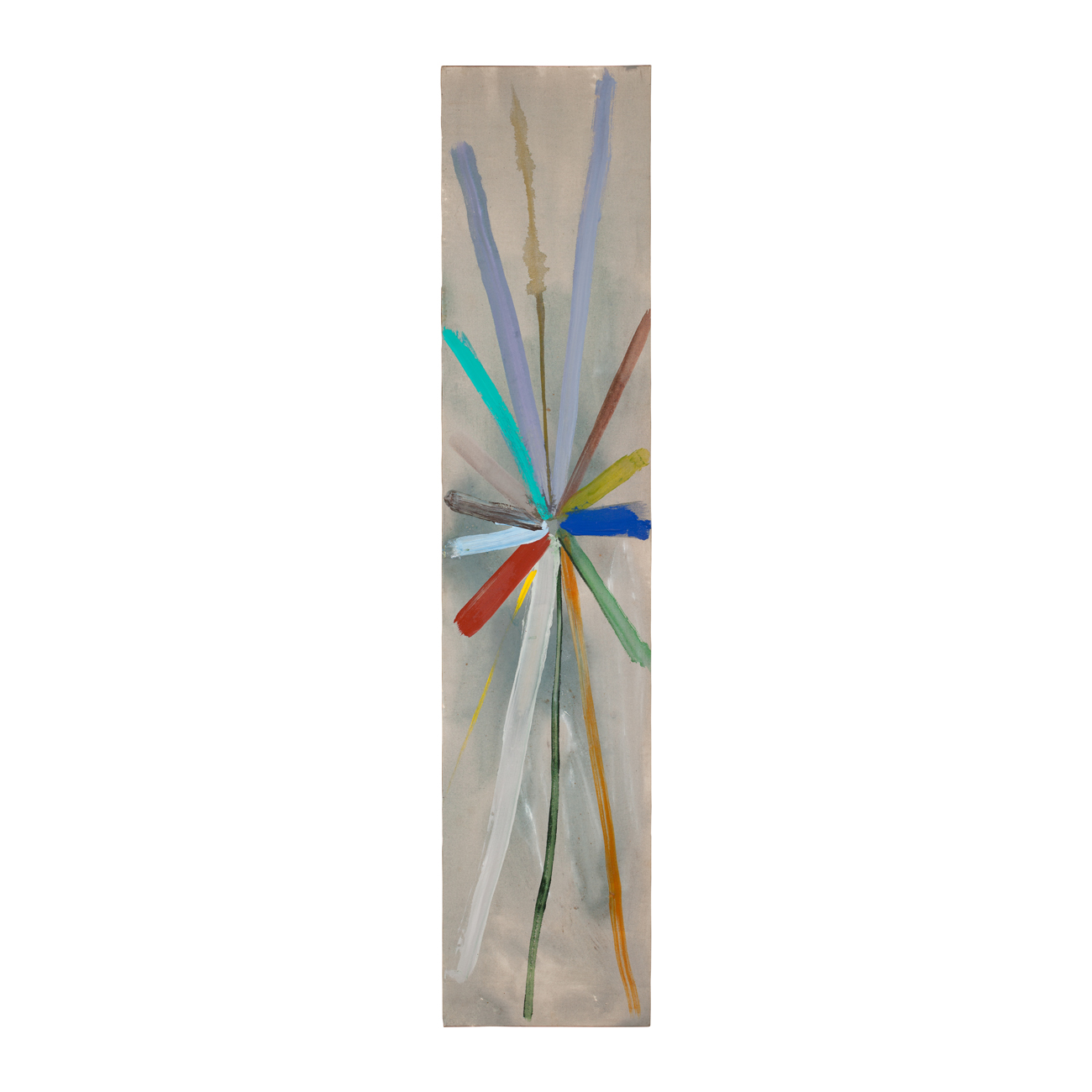 Feist experimented with the Spoke painting format extensively, using different sized canvases and paints with various opacities and textures to create different results. New-York based curator and art critic Karen Wilkin, who wrote about Feist’s practice on several occasions, touched on the evolution of Feist’s spoke paintings in Between Decisiveness and Discovery: The Paintings of Harold Feist: “The first Spoke paintings were earthy near-monochromes but, while he continued to make subtle, tonal pictures with deliberately limited chromatic ranges, he also began to make Spokes that were riots of multiple colours…The first Spokes were symmetrical and confrontational, so they seemed straightforward and the implied spin, controlled, even stately. Later Feist increased the tension in the image by elongating his canvases, compressing the spokes on the narrow sides and extending them on the long sides. This could produce a fleeting sense of three-dimensionality, a momentary recollection of how a round, radial configuration might appear in perspective, an illusion that was almost immediately cancelled by the fact of paint on a surface.”

Harold Feist was born in San Angelo, Texas. Known for his colour field and “Spoke” paintings, like New Thailand, he was embraced and supported by the influential New York art critic Clement Greenberg. He completed an MFA from the Maryland Institute College of Art (MICA), and from 1968 he came to Canada to teach at several universities, such as the Alberta College of Art, Mount Allision University, and the University of Guelph. Feist’s work can be found in the collections throughout North America, including The Agnes Etherington Art Centre, the Canada Council Art Bank, the Beaverbrook Art Gallery, the MacLaren Art Centre, and the Kitchener Waterloo Art Gallery among others. 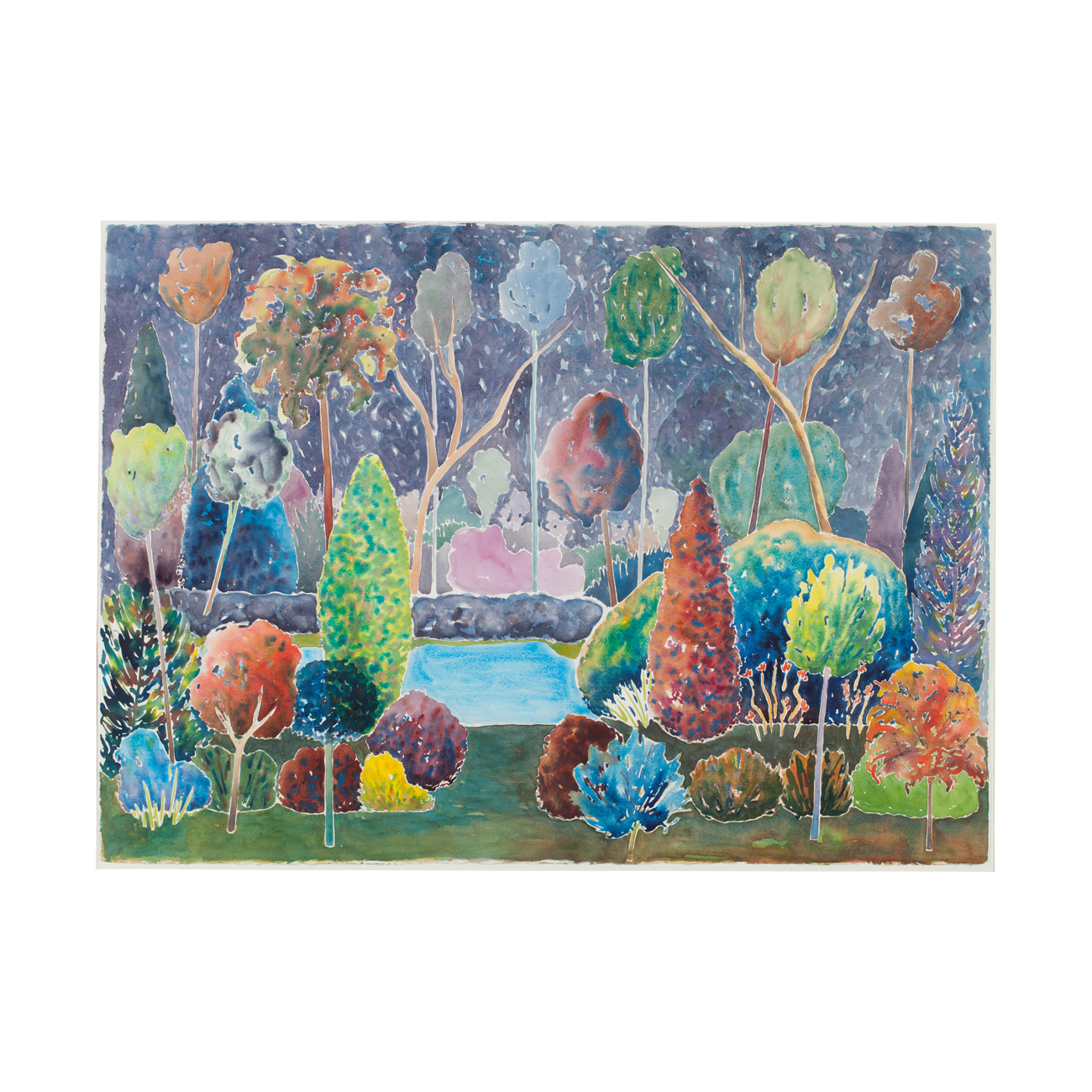 Garden Series No. 4 places viewers by the edge of a pond in a whimsical garden at night. Trees and shrubs with coral, cerulean blue, plum and viridian foliage quietly reach up toward the sky. Stars have been painted around with inky blue-grey pigment, their centres left pale. In the distance the bushes and limbless trees, like colourful cattails, become less detailed, merely aqueous stand-ins for the landscape. Stonehouse’s use of vivid colours and abstracted shapes accentuate the dreamlike quality of the scene.

Marsha Stonehouse is a Toronto-based artist, teacher and creativity facilitator. A graduate in Fine Art from the University of Western Ontario, she has also pursued graduate studies at the Banff School of Fine Art in Alberta and the Slade School of Art in England. Her practice includes painting, drawing, sculpture, dance, music, writing, martial arts, meditation and travel. She owns and operates the Stonehouse Studio for the healing and creative arts. 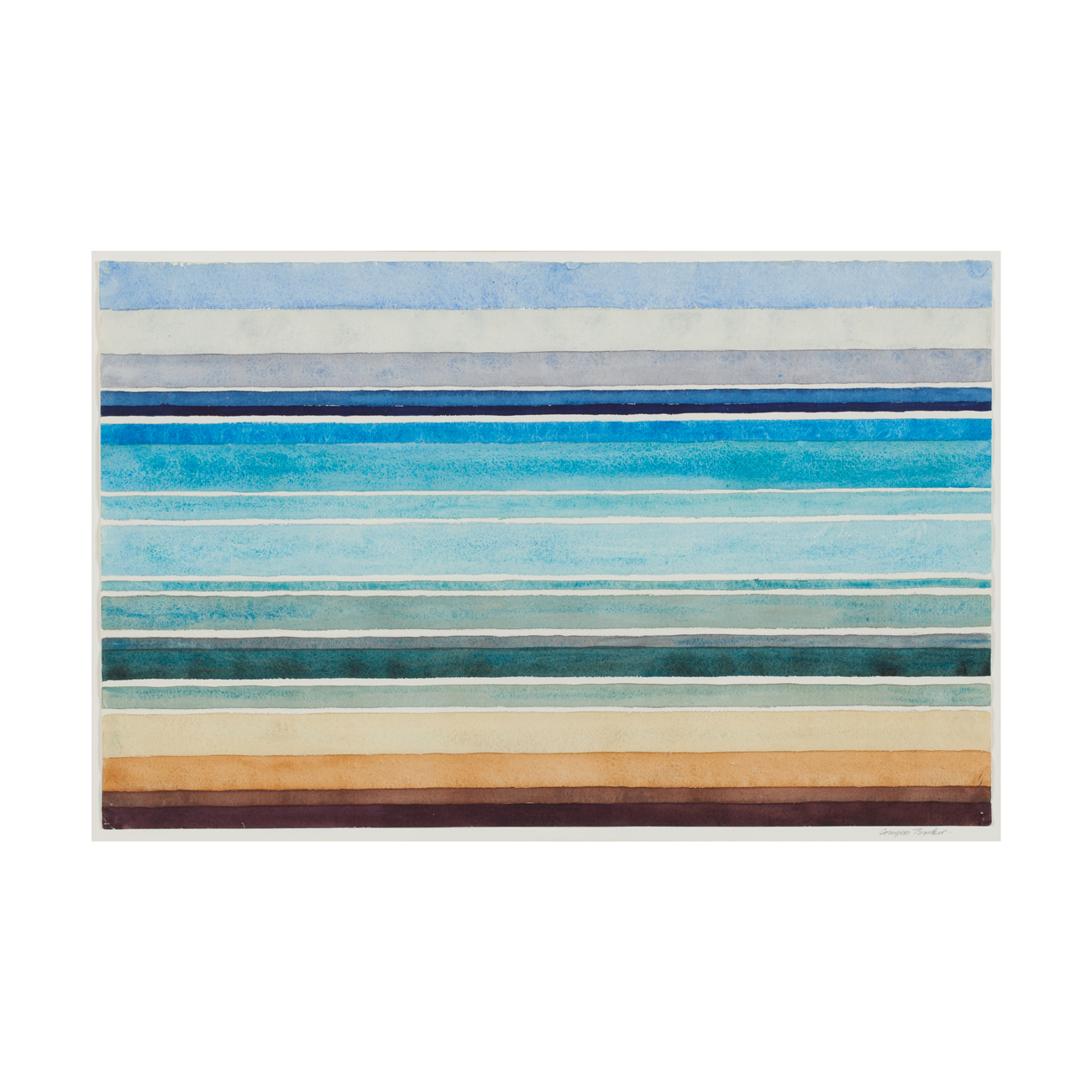 Ernest Conyers Barker was born in Toronto in 1909 and studied at the Central Technical School and Ontario College of Art in the 1920s.

For a retrospective of Conyers Barker’s work at the MacLaren Art Centre in 1995, titled In Search of Balance, Hartley Woodside wrote, “The work of E. Conyers Barker is born of craftsmanship, right in colour and rooted in landscape. Like the Group of Seven, who he has always admired, he seeks to simplify the language of the landscape but in a distinct and unmistakably Conyers fashion.” A prime example of this lives within his Barbados Series: 10 watercolours which progress from economic depictions of turquoise water and pale sky to abstracted stripes of tan beach and crystal blue sea, each piece more simplified than the last.

While painting in Ontario throughout his life, Conyers Barker favoured Georgian Bay, Algonquin Park, Huntsville, Aurora and the Holland Marsh area north of Toronto for painting and sketching. He was a member of the Ontario Society of Artists, Canadian Society of Painters in Water Colour, Society of Canadian Artists and the Royal Canadian Academy (1990). His work is held in the collections of the Art Gallery of Ontario, the MacLaren Art Centre, the Toronto Public Archives and Toyota Canada among others. He painted into his 90s, only stopped by blindness. He passed away in 2003.